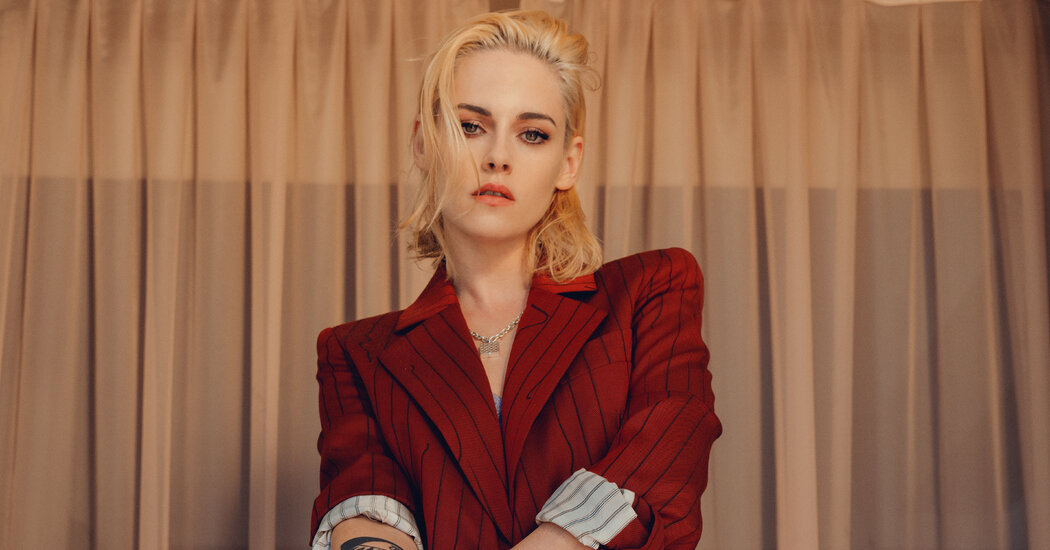 Kristen Stewart has sometimes been accused of just playing variations on herself, as if that isn’t half the reason we’re drawn to movie stars. In “Twilight” (2008), she brought a specific and sullen appeal to a heroine conceived as a blank slate for female readers; later, in “Personal Shopper” (2017), when Stewart traded her polo shirts for a rich client’s shimmering dress, you could see both the star and the character regarding her new look in the mirror: Is this me? Could I make it me?

At first, her new drama “Spencer” would appear to be a sop for the sort of moviegoer who’d demand a more rigorous transformation from the “Twilight” actress: Directed by Pablo Larraín (“Jackie”), the movie is a psychological portrait of Princess Diana as she unravels, then rallies, over a three-day Christmas holiday. Instead of hiring a British actress, Larraín chose Stewart, a contemporary figure of California cool who met me on the day of our interview wearing a brick-red pinstripe suit, her jacket sleeves rolled up to reveal a small constellation of tattoos.

The 31-year-old actress who sat opposite me on a balcony at the Sunset Tower Hotel in West Hollywood may not have looked like the obvious pick to play the people’s princess, but a funny thing happens as you watch “Spencer”: The distance that initially seemed so vast between the two women will close to the point where it seems like the canniest casting ever. Stewart, after all, knows a thing or two about a life lived in the public eye, the scrutiny leveled at a high-profile romance, and the private moments snatched away by paparazzi.

Stewart gave her all to the movie, studying Diana’s posture, mannerisms and accent; the resulting performance, potent and provocative, has thrust her to the front of this year’s crop of best-actress Oscar contenders. “I used to think that I needed spontaneity and anxiety to propel me into something truthful and that if I had too much control over it, it was immediately going to become fabricated,” Stewart said. “I just didn’t have the confidence to hold that and be like, ‘No, you can design something.’”

But Larraín had that confidence in her.

“She’s like an actress from the ’50s or ’60s,” the director said. “What she’s doing for the story can be at a very grounded character level, but it’s elevated to a poetic level that creates an enormous amount of mystery and intrigue. And that’s probably the best cocktail you could ever find for a performance on camera.”

Stewart knew that taking on “Spencer” would be a challenge, and in the days leading up to the shoot, she even developed lockjaw as she ceaselessly practiced her British accent. But once she was on set, finally channeling Diana, her fears melted away: “At the end of week one, I was like, ‘This is the best thing I’ve ever done. This is the most alive I’ve ever felt.’”

Here are edited excerpts from our conversation.

What was your first impression when Pablo pitched “Spencer” to you?

He was so sure that I should do this, and I thought that was audacious and crazy because it just doesn’t seem like the most instinctive, immediate choice.

Did he tell you why it had to be you?

He was like, “There’s something about Diana that we’ll never know. You make me feel like that. I’ve seen your work, and I never really know what you’re thinking.” And I feel that way about Diana as well. Even though I feel this overwhelming attraction to her spirit and her energy, there’s something that’s disarming about her. I want to hang out with her. I want to race her down a long hallway. I want to, like, meet her kid.

Still, was it a natural step to say yes to this movie?

The only reason that you work as an actor for this long is to try and outdo yourself every time. This one was just the proper step up that I couldn’t really say no to. It was ambitious and attractive, and I was like, “If I can’t do that, then I’ll just stop and direct movies instead.” And it’s fun to imagine a larger conversation. It’s fun to imagine if you’re capable of holding that.

What emerged of Diana as you researched her?

There were so many layers to read. There were so many ways in which she tried to reveal herself, that weren’t necessarily in the form of a direct sentence. She wasn’t allowed to be like, “I’m dying, and he doesn’t love me.” I think the way she expressed herself is so interesting because there are so many lenses between you and that communication.

It’s like, to not acknowledge that every single person in the world is sitting here on this balcony with us is wild. We have to pretend they’re not because we’re being nice to each other. Which is nice! But also, we’re talking to everyone in the whole world right now.

And I’m asking you to be vulnerable with me, as though what you say won’t be chopped up, reblogged and retweeted by people who aren’t here.

You roll the dice, definitely. One could write a very long paper on the exchange between a journalist and an actor. That’s obviously not why we’re here, but yeah.

But it kind of is. Diana had to be incredibly savvy about her image and the way it was used, while still radiating utter authenticity. Actors are required to do the same.

Every way that we reach out toward each other has to be designed from an interior place. Therefore, it’s a form of manipulation. You want someone to understand you; you want to make someone feel the way that you feel. It’s sad to think about her in general because she’s just the most coveted, loved and also rejected, self-hating person. Those things shouldn’t go together.

Unless some of it is cause and some of it is effect. Do we respond to her in a way that causes a little bit of that? When she’s called the people’s princess, does that imply a form of ownership?

Of course, which I think she probably tried to cultivate. I think she had to reach out to get any sort of warm acceptance, when obviously at home she felt invisible and unheard and stifled and cold. She was looking sort of everywhere she could for that kind of love. She was the first royal in the entire history of them to reach out and touch people physically, in their face, without gloves on. That rocked people to their core.

How did you square some of her contradictions?

There were people that were like, “She would never use profanity.” And then other memories would be like, “Oh, gosh, she just came in swearing.” So you can’t know her. With famous people, you hear someone go, “I met them once and they’re not very nice,” but it’s like, “Were you asking them how their day went when they were coming out of the pisser? Maybe they weren’t nice to you in that moment.” People love to have one experience sort of sum up an entire human’s personality. You just have to take everyone’s perspective and shove them together and kind of figure out your own.

You’re clearly speaking from personal experience. But in other interviews I’ve read, you demur when asked to draw a direct line between your time in the public eye and Diana’s.

The reason I’m sort of reluctant to acknowledge the comparison is because I’ve just never been told to sit and stay in the way that was so damaging and dishonest as it was from her perspective. I’ve really functioned from a place of impulse and discovery and true honesty and spontaneity.

But still, you know what a high level of public scrutiny can be like. You know what it’s like to have personal moments stolen by photographers.

Do I feel that women are treated unfairly and overly criticized in comparison to men in the press? Absolutely. It’s a conversation that I want to lean into. But I got very famous because of movies and that just feels different. Diana believed in an ideal that ultimately became clear to her was farcical. Dude, if she knew she was going to be in a loveless marriage …. Therefore, when people were like, “Well, she knew what she was getting herself into,” it’s like, not at all.

But isn’t that a critique often leveled against movie stars, too? That they shouldn’t complain about the paparazzi, because they knew what they were signing up for?

Yeah. I mean, very directly, I didn’t want to be famous. I wanted to be an actor. And I totally acknowledge that you could be like, “What are you talking about? You don’t get one without the other.” But it does feel like cruel and unusual punishment to do something you love and then suddenly feel like, “Wait a second. Was I just shoved over and my shirt pulled over my head and then I was photographed?” Because I didn’t choose that.

So why did you choose to be an actor?

I’ve always said it’s because it’s the only job that you could have as a little kid on set. My mom’s a script supervisor and my dad is an A.D. [assistant director], so I spent a little bit of time on set and there was a kind of circus mentality that is so fun.

Were your parents surprised you chose that path? You started acting professionally at age 8.

Yeah. You think of child actors, and you imagine pigtails and smiles for the camera and Vaseline on your teeth, and I was so far from that. I looked just like my brother. I was the least quote-unquote charismatic child star you could have imagined. But I think the reason that I’m still an actor, what I really get out of it, is that there are so many versions of yourself that hypothetically are possible in dreamland. I get to live more. I get to fantasize. And the fantasy doesn’t mean it’s not real.

You’re currently casting for your feature directorial debut, “The Chronology of Water,” based on the harrowing memoir by Lidia Yuknavitch. What is it like to be on the other side of the camera, auditioning all these actresses?

I think I have amnesia, because I feel I don’t want to make them do things that are too hard or to put themselves out there too much, but that’s what you do. That’s the whole thing! I need to remind myself that when I was younger, if I liked something, I would have been like, “I’ll do whatever you need. I’ll read five times.” I just know what a finicky and delicate line that is to let someone know that this is going to pummel you and you have to open yourself to it. It’s like, “I’m about to punch you in the face. Put your arms down.”

And if a director told you that her movie would punch you in the face, how would you react?

That’s what I’m saying. I would lean in. I’d show them my chin.

Dr. Eric Topol told CNBC’s Jim Cramer on Tuesday he believes existing Covid vaccines will offer adequate protection against serve disease for people who get infected by the newly detected…

‘The Power of the Dog’ Review: Wild Hearts on a Closed Frontier