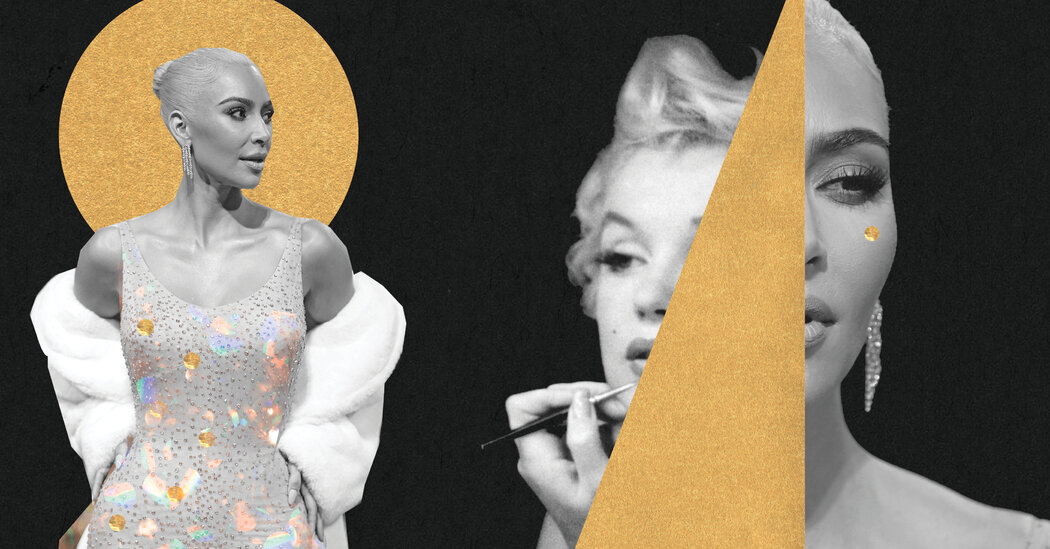 Beautiful clothes are not like beautiful people. A beautiful person has something you don’t, even if you’re beautiful, too: Their beauty can’t be transferred, borrowed or replicated. We can envy or resent or imitate it, but we are always outside it. A beautiful dress, on the other hand, acts like an invitation, beckoning you to step inside it: This could be you. Still, anybody who has stepped too impulsively into a dressing room, or rifled through a friend’s closet, will know that this invitation is a deceptive one. Beautiful clothes have ideas about who gets to wear them.

Enter Kim Kardashian, who arrived at this year’s Met Gala wearing Marilyn Monroe’s famous 1962 “Happy Birthday, Mr. President” dress — the original garment itself, on loan from the Ripley’s Believe It or Not! museum. Watching her carefully pick her way up the stairs, her hair bleached blond, was a weird, if moving, testimony to the promise of clothes and the limits of that promise. And perhaps, a referendum on the story so many people tell themselves while judging the outfits celebrities have assembled for the gala: that if they had the looks and figures and budgets of the attendees, they would absolutely look better than that.

Kardashian lost, by her own account, 16 pounds in three weeks in order to wear the original dress, instead of a replica. But the reason the original dress was so famous had almost nothing to do with the dress itself and everything to do with the woman wearing it. Its point was that Monroe, in 1962, found a way to be naked while clothed, wearing nothing under a dress that appeared sheer without actually being so. Without her breathy, soft beauty animating it, it’s just a nice dress. Kardashian looked good in it, of course, but for all her work, she didn’t really evoke Monroe; if I hadn’t been told it was that particular dress, I wouldn’t have recognized it.

On social media, some loved the look: “She IS a modern day Marilyn,” went one breathless and then much-mocked comment. Others were underwhelmed. (“Sorry,” tweeted Stephanie Zacharek, the film critic at Time, “but the ‘Marilyn Monroe dress’ worn with modern underpinnings is not really the ‘Marilyn Monroe dress.’”) Conservators complained that the dress had been irreparably damaged. Some wrung their hands about the choice to crash diet to fit into it. In any case, it was indisputably the look of the night — not because it was memorable in itself, but because it was once, decades ago.

The original dress was so fragile that after her slow climb up the red carpet, Kardashian changed into a replica. The real thing was just to make a point for the cameras — which is to say, for us at home. Others have successfully echoed Monroe at the Met Gala, including Billie Eilish at last year’s event. The reason to wear Monroe’s actual clothes, and not a dress meant to echo or pay homage to them, would be to insist on a literal kind of transformation: I am the Marilyn Monroe of today, not in analogy but in fact. (And one the real Monroe never got to be — not just a bombshell but a business, a mother, able to detach from toxic male influences, able to shake off tabloids.) But no amount of weight loss, shape wear and the rest can get you access to only the good and none of the bad in Monroe’s life; she lingers in the culture the way she does because she is both aspirational and tragic.