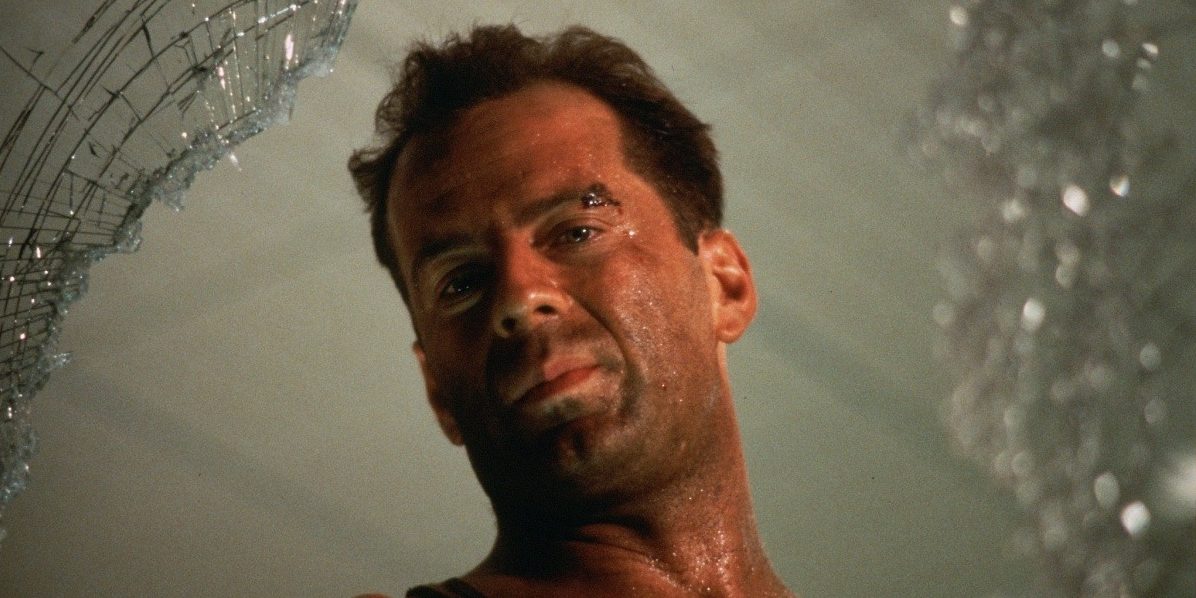 Editor’s Note: This essay was previously published on December 23, 2019.

Watching Die Hard today, over thirty years since its 1988 release, it is striking that unlike so many other action vehicles, the film offers us a look at a working-class hero in a wealthy elite’s world. Bruce Willis plays John McClane, an NYPD detective visiting California—the terrestrial paradise—only to walk into a deadly plot with a disastrous premonition of America’s future. In the eyes of a weary, wisecracking 1980’s cop, the nation was already rife with the corruption of elite institutions that in recent years have ever more shown themselves to be as exploitative as they are irresponsible. The film shows us a rogue’s gallery of them in the press, therapeutic academia, city politics, the police, the FBI, and in financial corporations—and it suggests that they will continue to rule at the expense of the rest of us.

Die Hard predicted this about our world, and it presaged the extinction of the action hero. If that sounds like hyperbole, consider that John McClane has many things going for him—but not a future. He may save the day, but he doesn’t get to stick around.

The Action Comedy and the Western

John McClane never claimed any virtues for himself—his humor is typically self-deprecatory and he has few illusions. The America in which he makes his journey West is quickly becoming technologized—he flies to L.A. and is ferried to his destination in a limousine with the latest gadgets. His wife has left him to take a job located in Nakatomi Plaza, a state-of-the-art skyscraper, and the new American headquarters of a Japanese corporation. He’s a kid from the sticks, comparatively. Is there any room or need for his manly virtues in the globalized future his wife is helping build?

McClane’s agony and triumph over the course of one evening reveal his nature. He’s a cowboy stuck facing off against a crew of sophisticated terrorists led by an elegant German—Hans Gruber (Alan Rickman)—and supported by enough technology and firepower to bring the authorities to heel. Gruber mocks him as a John Wayne, but McClane says he rather liked Roy Rogers—a comic cowboy, not the demigod of the John Ford Westerns.

At least as far as filmmakers are concerned, cowboys become detectives in modern America. At least in their modern key, detective stories tend to uncover urban lawlessness corrupting the core of civilization. They depict Americans that have become defenseless in their prosperous cities, who surrender their freedom in the hopes of security—all the better to be administered by less-than-benevolent elites. And so, such films remind us that there may be some need yet for men unafraid of death.

Compared to the corporate types McClane was to spend his evening with (and even the terrorists he takes on), John is a savage. Great direction and humor are employed to make this savagery palatable to modern audiences, but let us face the ugly truth. McClane sheds his clothes, gets covered in dirt and blood, and ends up in a ferocious fight with a much stronger man, where he curses with abandon, leaving far behind Bruce Willis’s repartee and smirk. Director John McTiernan makes a point of reminding us that manly men can be terrifying—just like John Wayne was.

The Western died by the childish criticism that it’s simple-minded moralism—the white hats are sainted  and guaranteed to win, whereas the black hats are transparently villainous and doomed to lose. But John Wayne played fearful men who could not live in the well-mannered cities that sprang out of the Old West (The Man Who Shot Liberty Valance) or even with the families they were saving (The Searchers). The villains Wayne’s characters fought had strangely admirable qualities that he shared, adding up to an all-American love of freedom, savage as it is, without the restraints of law and order.

The Old Westerns and the detective-driven American action films of the 1980’s share a common moral center. They present a reminder that in order to survive civilization needs hard, self-sacrificing men that are out of step with their fellow citizens. If we reduce these stories to one-liners or memes, there is only oblivion afterward.

Die Hard is our Christmastime Western, edifying children and adults alike. McTiernan learned from and attempted to make a movie as memorable as John Ford’s. He combined fear and comedy: Fear, that we pay attention to the dangers we’re facing, which require fearless defense of freedom. And comedy, that we may laugh at the boastful elites and villains that are corrupting our way of life.

This time-honored tradition goes back to Stagecoach, the 1939 movie that resurrected the Western and made John Wayne a star. Stagecoach also criticized elite institutions—including the police and financial elites—from an everyman perspective. And it ended with John Wayne and his girl, Claire Trevor, running for the border, saved, as the comic relief guy says, from “the blessings of civilization.” It was, like Die Hard, equal parts tragedy and comedy. To be truly memorable, it had to embrace both.

In his most gruesome joke, McClane, after killing his first terrorist, uses the corpse to send a message—dresses it like Santa and sends it down by elevator, with a message written on his chest in blood: “Now I have a machine gun! Ho-ho-ho!” For a man simply flying to see his wife and kids for Christmas to try to save his marriage, and who learns to apologize to his wife for his intransigence, John can be quite terrifying.

This combination of the urban, hard-boiled detective from noir movies and the Western cowboy makes John McClane a memorable character. He restored to American cinema the all-American tension between honor and commerce. His antagonists are mostly dishonorable people. McTiernan, like Sam Peckinpah in The Wild Bunch, went out of his way to show that the life of commerce includes moral blindness: A yuppie cokehead trying to negotiate with terrorists, because he thinks money is everything. But they don’t just want money, they also want to kill everyone at the party atop Nakatomi Plaza, out of contempt for their weakness. That’s incomprehensible in terms of interest.

The scene where this corporate sheep is eaten by the wolf Gruber is incredibly moralistic. So also the scenes that criticize the irresponsibility of TV news-entertainment, which endangers the lives of innocent people in pursuit of hysterical, sentimental stories and, simultaneously, deludes their audience with fake psychological expertise which explains evil away. These scenes expose the exploitative fantasies of TV celebrity and Wall Street “masters of the universe.” Gruber took the measure of elite liberals, exploiting their sentimentalization of left-wing political terrorism. He pretends he has political principles that require their respect and deference—and uses both the FBI’s and the media’s script for dealing with terrorists as the key to his plan to rob the Nakatomi Corporation of millions.

The movie also criticizes the irresponsible arrogance of the local police who take their anger and shame out on McClane, as though he had caused evil by daring to confront it. In a way, it foresaw the missteps and massacres committed by federal agencies with impunity in the 1990s in places like Waco and Ruby Ridge. This realism comes from the daring to judge elite institutions by the standards of normal Americans, revealing the corruption behind a façade of expertise and unquestionable intellectual superiority.

America has changed in the past generation, and our entertainment has moved away from the older kind of hero, with his moral virtues. It’s become difficult to see in the chance events of the movie the fundamental predicament of justice in America—rugged freedom versus sophisticated corruption, toughness versus cruelty, nobility versus success worship.

But we might learn from the villain even if we don’t learn from the hero. Good drama requires a good villain. Hans Gruber mocked cowboys and he paid the price—that’s the revenge of eternal verities against Progressive hubris. But he’s a very intelligent villain who combines technological know-how with a keen grasp of liberal pieties. His successful exploitation of our institutions—police, corporations, media—proves that he knows our weaknesses and vices. He knows how vulnerable our institutions actually are, not despite, but because of their arrogance or elitism. He has looked behind the glamour and judged it to be as rotten as he is, but too soft to resist him.

Indeed, the first half of the movie depicts a very exciting heist. When the terrorists finally get into the vault they want to rob, the music erupts in a full orchestra. To what does McTiernan set the scene? A theme that’s been worked in the soundtrack throughout, Beethoven’s Ode to Joy—the most modern, most European melody! McTiernan invites us to admire Gruber’s intelligence and design. But also to learn from his criticism of our institutions. If we want to defend ourselves, we need to see what’s wrong with us. Our heroes and our dramas should make us proud and win the day for us—but first they should humble us, reminding us that we are not perfect.

So, we should all watch Die Hard again and admire John McClane, an ordinary hero. It’s good to remember him because we won’t see his like again soon. And if you want to hear more about everyman heroes and their criticism of elite institutions, listen to my Die Hard podcast. Merry Christmas!