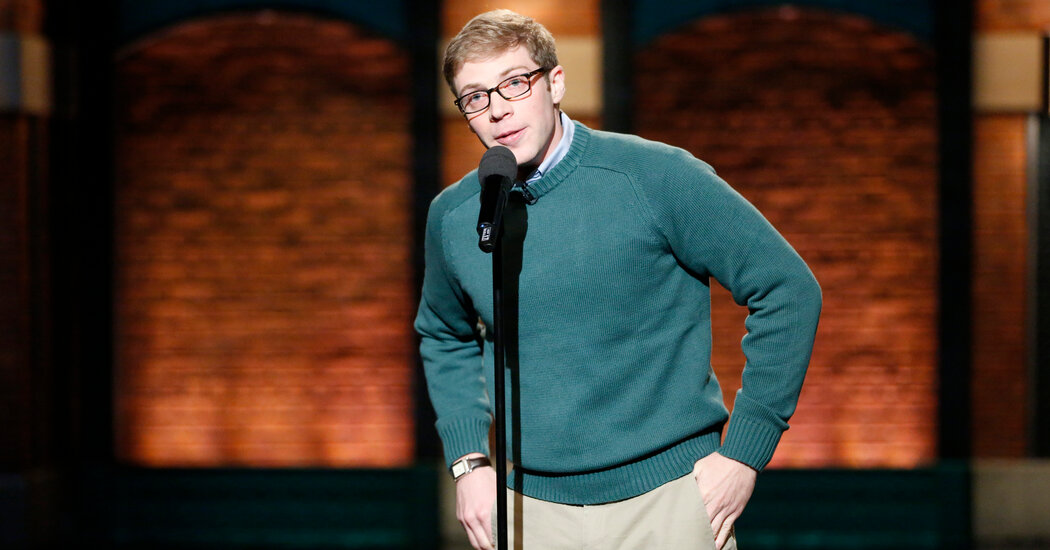 He displays the earnest manner and sense of wonder that most people lose by their teenage years. It’s tempting to conclude that his persona is a stunt, a piece of performance art in the Andy Kaufman tradition. Some fans probably enjoy his work as a kind of ironic prank on comedy itself. And he surely understands this, which might be why he often doubles down on the incongruous 1950s wholesomeness, singing the praises of a warm apple pie in the fall or apologizing for swearing. But watch him long enough and what becomes clear is that Joe Pera isn’t after glib laughs. Wait for the wink or the twist, and it never comes.

His goal is not to take audiences out of the action by laughing at it, but to envelop them in a muted version of reality, to invite them to surrender to the small pleasures of calm.

For years, I refused. I don’t tend to go to art for that, and when I do, I find it in unlikely places, like slasher films or Stephen A. Smith (yes, he makes N.B.A. punditry into an art). But those are my eccentric tastes. And while his aesthetic seems like ingratiating wholesome Americana, there’s an avant-garde obscureness underneath it. You have to work a bit to get it. Adventurous types should try.

By slowing down and reducing everything to simple comforts, Pera can tap into a child’s view of the world, back when we dealt with boredom most creatively by creating races between rain drops on windshields or finding shapes in clouds.

Many of his shows linger so reverentially on everyday things — the supermarket, a song by the Who — that they seem almost spiritual. Other times he appears to push the concept of banal normal life so far as to find the comic weirdness within. At one point in the first episode, an old stranger drives by him, stops and asks for Pera’s phone. The man takes a photo of himself and hands the phone back to Pera. It’s an odd moment that in a different show could make for cringe comedy, but here, this random gesture comes off as vaguely generous and inexplicable. I chuckled. You might not. But it’s best not to think about it too much.

Early in the pandemic, Pera released a special called “Relaxing Old Footage With Joe Pera,” which featured stock video of waterfalls and coffee pots along with comments like this statement about watching trees: “I can’t be the only one who wants to watch Old Chico, a 9,000-year-old spruce, after reading the news.”