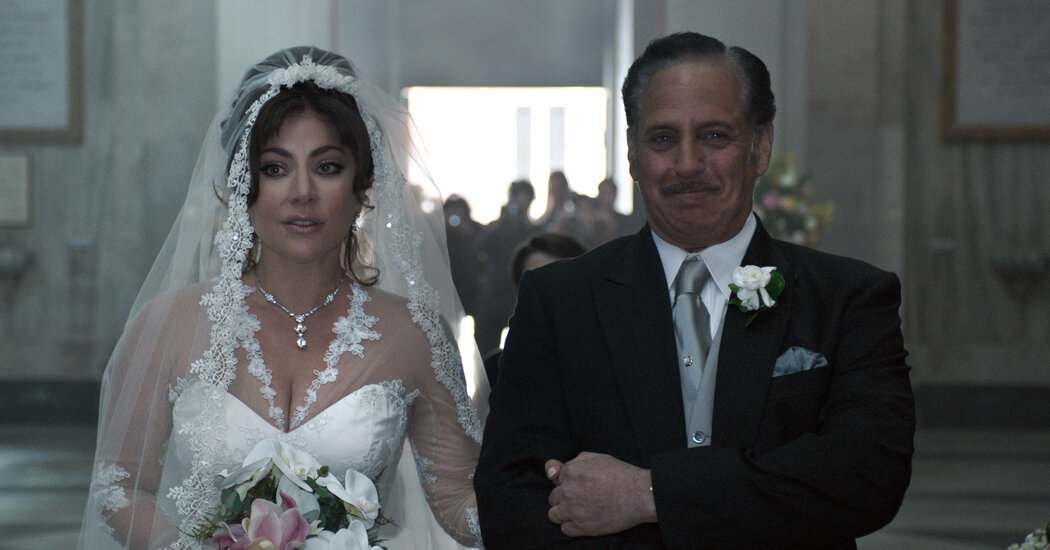 In seasons past, Gucci held a runway show on the first day of Milan Fashion Week. This season, however, the new collection is scheduled to debut in Los Angeles on Nov. 3 — not long before the Thanksgiving weekend release in movie theaters of “House of Gucci,” a film based on the true story of the killing of the former chief of the Italian fashion house, Maurizio Gucci, by his ex-wife, Patrizia Reggiani.

The movie, which stars Lady Gaga and Adam Driver, was directed by Ridley Scott, with costumes by his longtime collaborator, Janty Yates. Here Ms. Yates talks about the experience.

How long did it take to prepare and produce the costumes for this film?

We started six weeks of research and development during lockdown and then production from September, ahead of six months spent in Rome shooting and making the film earlier this year. The movie spanned a 20-year period in which fashion changed dramatically — 1975 to 1995 — so there had to be real range in the costumes, plus everything had to be made for L.G. [Ms. Yates’s nickname for Lady Gaga], Adam Driver and other actors like Jared Leto. Naturally I concentrated on the stars, but there was a cast of about 80 in total, and I also rented all the costumes for all the crowd and extras. I am completely responsible for all of it. The buck stops with me.

Did you have access to the Gucci archives in Florence?

Yes, last October, which was wonderful. We took out many looks and then had them sent to Los Angeles so we could do Zoom fittings from Europe with L.G. Lots of the looks fit her like a glove. Two standouts were probably a terrific trouser suit covered in the Gucci logo, and then a Gucci logo blouse and brown leather skirt, which she wears in the film when her character, Patrizia Reggiani, is at her daughter’s sports day and is served with divorce papers.

But we sourced looks from anywhere and everywhere. We also used top vintage dealers and we found items and accessories on eBay and Etsy. We delved into L.G.’s own personal fashion archive, received loans from houses like Alaïa and Valentino and had a tailor with five seamstresses on call to make looks for L.G., too.

Tell us more about the style of the woman played by Gaga?

We didn’t want her to be a Joan Collins from “Dynasty” type — what we were aiming for was more in the style of Gina Lollobrigida. Knowing L.G.’s penchant for extremes, I was initially a little nervous about that. But L.G. said she really wanted to dress like her Italian mother did at that time, so we took that as a jumping-off point. Jewelry was very important, for example; we layered up two necklaces here, four bracelets there, we used tons of accessories.

L.G. had 54 shooting days with 54 different looks. And we didn’t repeat a single item, not even an earring.

How involved was Lady Gaga in the creative process?

Hugely involved, not least because she is a complete clotheshorse and looks marvelous in everything. She was hugely focused on how her character might appear at a particular moment, and had very strong views on aspects like hair and makeup. I would create initial selections, and then she would select from there.

And of course, the paparazzi were there every morning, hovering at every shoot. They knew what she would be wearing for a particular scene often before we’d even got the film in the can. But people are very excited about this, and in the end we decided it was no bad thing.

What about Mr. Driver’s wardrobe?

Well, we had almost everything made for Adam. His suits, shirts, blazers, trousers, cashmere coats with velvet collars. Initially we had pieces made by a marvelous Savile Row tailor now based in New York who I initially used to dress Denzel Washington for the movie “American Gangster.” But unfortunately, he fell ill halfway through, at which point the Italian men’s brand Zegna stepped in, too.

So how many costumes were produced in total?

Well, we probably did about 75 to 100 for L.G. Then I had something like 50 suits, jackets and coats made. I know I did 45 shirts for Adam because we did doubles, then a further 15 or 16. So that’s 75 shirts. Al Pacino got 14 suits. And then Zegna came in and they made other suits. Eight or 10 suits were made for Jared Leto — sadly, we didn’t use them all. Then two or three mother-of-the-bride outfits. Gosh, I don’t know. Probably 300, something like that altogether. Currently, they are all being housed in a warehouse outside Rome.

Did you have a favorite look?

I think my favorite is the wedding dress because it was just such a labor of love. All that lace was appliquéd by hand by my cutter, Dominic Young. We actually had a bit of a fright because L.G. said, “Well, shouldn’t we have the original dress as an option as well?” So that was made. But we just looked at it on the day and it was not quite right. But really, I loved everything we made for this film. It was a joy to be part of.

This conversation, first held on Instagram Live, was edited and condensed.