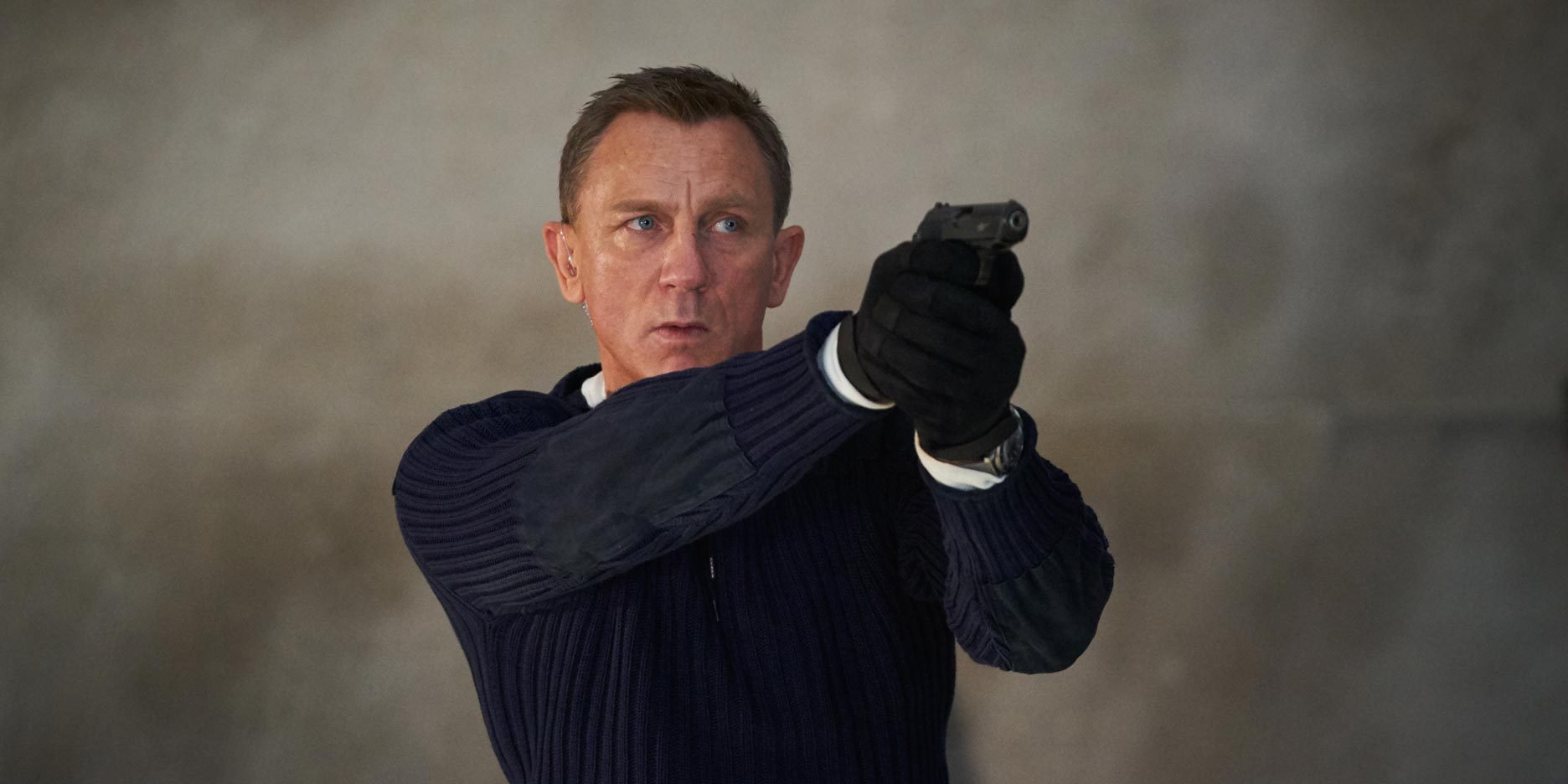 During the Enlightenment, David Hume sought to replace the ideal of the Christian knight with that of the gallant. He was sure that a military with baggage trains stocked with champagne would prevail against enemies with less refined tastes. Rustic soldiers, minds stuffed with superstitions, should be supplanted by the scientific soldier, the officer and gentleman. Ambassadors of the refinement of the arts and sciences, a new model army would deliver a revolution in military affairs to the battlefield. For the first sixty years of his film life, Hume’s fellow Scot, James Bond was the definition of the gallant. With suavity to disarm the ladies and the latest refinements in weapons and spy trickery to dispatch enemies, Bond was the lethal edge of the Enlightenment. In No Time to Die, the Christian knight makes a comeback.

The cars, the tuxedo, and the Omega are all still there, but the whole is an exposition of John 15:13: Greater love hath no man than this, that a man lay down his life for his friends.

The change had been coming. Skyfall, the most poignant and best of the Daniel Craig films, dwelt on mothers. After decades away, Bond returns to his rustic Scottish country estate. There, he visits the grave of his father and mother, Andrew and Monique Delacroix Bond. Orphaned as a young boy, the plot twist of Skyfall is the rivalry between Bond and former MI6 agent Raoul Silva for the attention of M (played by Dame Judi Dench). Silva feels betrayed by his “Mummy” M, who abandoned him when captured, leaving him no choice but cyanide. The capsule failed, save to eat away half of Silva’s face. In Skyfall—the title of the film is the name of Bond’s family estate—Silva is out to get “Mummy” and finally gets his chance. Bond is also estranged from M, but reconciled, she dies in Bond’s arms, a reverse Pietà.

No Time to Die opens with the killing of a mother, the assassin a man in a spooky mask, the hint of a facial disfigurement showing. The disfigured killer and criminal mastermind this time is Lyutsifer Safin, who will cross Bond in the most chilling way.

No Time to Die is a very good film that wears its two and three-quarter hours lightly. The pace of the film barely slows save for the tender moment when Bond prepares breakfast for a little girl. His domestic skills are severely tested as he peels an apple for her. He has just met the girl and it is dawning on him that he is her father. In No Time to Die, Bond’s life has come full circle. Son of a French-speaking Swiss mother, Bond has a daughter whose mother tongue is French. The film begins with Bond in Italy breaking up with Madeleine Swann (Léa Seydoux). Five years later, having learnt that Madeleine did not betray him, he visits her and discovers they have a daughter, Mathilde. Lyutsifer kidnaps mother and daughter. The chase is on.

Falling from the sky into the sea, the gravity glider morphs into a torpedo-like submersible that slides quietly into a Soviet-era missile installation upon that classic Bond set, the obscure island. The installation is now a bio-chemical factory and, a brilliant touch, is staffed with Soviet-era-looking women in pinnies and kerchiefs. The change from glider to submersible references Wet Nellie, Bond’s Lotus sports car that delivered one of the franchise’s most iconic scenes. In The Spy Who Loved Me (1977), the Moore Bond, helming the Lotus-cum-submersible, drives out of the sea onto a busy beach. Moore, grinning at the astonished sunbathers, tosses a fish out of the car window and speeds off. In No Time to Die, Bond emerges from the water baptized, the very model of the ordo caritatis. In traditional moral theology, the Bible’s greater love hath no man is a call to solidarity, in a strict order of obligation: family, nation, and humankind. Bond is bent on saving his family, but he will lay down his life for his country, and humanity, too.

Bond dies successfully rescuing his family. The brand is famous for the most improbable escape stunts, but unless the most outrageous deus ex machina extends its hand into the fireball of British naval rockets landing on top of a badly shot-up James, then the 007 that was James Bond is dead. Bond has been reincarnated many times but never actually killed off. There is a hint that a ludicrous escape was somehow pulled off. At the end of the film, the inner circle of MI6 gathers to pour out a glass of Scotch in remembrance of Bond—given government budgets, likely not Bond’s favourite 50-year-old Macallan at 80,000 USD a bottle. Amidst the grief, Moneypenny looks decidedly distracted.

The setting of the film is the end of the liberal international order. Obscure powers have replaced the known rules and regulations of neo-liberal globalization and state order. As M (Ralph Fiennes) explains, the friend-enemy distinction is now blurred. It is this mistiness that sets the plot going. That staple of Bond movies, the opening graphics sequence, shows Britannia with shield and trident falling over and being covered by the sands of time. This has been a theme of the Craig years: Bond’s beloved land receding from the world stage. The twist for this film is that M has an off-book bioweapons programme, because even the British government has been infiltrated. M does not know who to trust: Britannia is rotting from within. All too believably, the off-book bio lab is housed in an anonymous office high-rise in central London. The lab is raided, its most potent weapon stolen.

Given the hot water he is in, M hesitates to tell the British PM. Hoping to take advantage of M’s indecision, the CIA reaches out to a retired Bond and hires him as a private contractor to get the weapon into US hands. Bond agrees to freelance because he wants back at his old enemy, Blofeld, and his crime organization, Spectre. It is a fatal intelligence failure: Spectre does not have the weapon and will be its first victim. The old guard is giving way to the new. The film will end with not only Bond, but his old CIA buddy Felix Leiter and Blofeld dead, too, and all of Spectre wiped out. Lyutsifer takes them all down. Change, too, for the infamous Bond girls. They have morphed into agents. Paloma of the CIA (Ana de Armas) and Nomi of MI6 (Lashana Lynch) are as effective state-trained killers as Bond. There have been vapours about Bond becoming woke, but make no mistake, this film is still all about Bond. Bond might be retired and piqued to learn his “jersey” has not been retired, but when meeting the new 007 he pulls her up short. When Nomi cheekily sits on his bed, and speaks offhandedly to him, Bond promptly reminds her of rank. He is to be addressed properly: “It’s Commander Bond.” Hierarchy and British starchiness are not done for yet.

On a London street, M and Bond talk. The British establishment is unreliable, but the fight must go on: M juts out his chin to point, “for this.” A populist gesture towards the High Street, the British way of life needs to survive. In a conversation with Safin, Bond tells him tyrants can be beaten. Alluding to Bonaparte and Hitler, Bond recalls “other small men” the British fought and reminds Lyutsifer, “history isn’t kind to men who want to play God.” Britannia might be on the mat, but there is no KO, yet.

In No Time to Die, the establishment is reeling, subversion is everywhere. Even the ideal of the Zen Garden is punctured. Lyutsifer’s father, he tells us, was a gardener, but the Zen Garden he carries Mathilde around is not about serenity. There are plants that can heal, and those that can kill, in Lyutsifer’s poisoned Eden. It is not only the Garden of Eden that has been corrupted but that other great symbol of order: science. In a nod to science’s recent troubles with integrity, M’s chief scientist is in league with Safin. His motive is not greed, but vanity and curiosity: working for Lyutsifer means unregulated freedom to experiment. Under M’s secret cloak, science perfected a weapon with utterly precise targeting, only killing those whose DNA signature has been coded into the weapon. M’s goal was a weapon with no “collateral damage,” but the corrupt scientist has modified the coding to kill those with close DNA: entire families, ethnicities, and races. The opening graphic sequence shows strands of DNA and Bond, family man and agent of the Crown, will lay down his life to stop genocide.

The plot is quite terrifying, the bells and whistles of explosions and chases are subtended by a potent point about the blending of the biomedical and big data in all our futures. That blend is used by Lyutsifer to make Bond a leper to his family. In the final confrontation, Bond gets the better of the fight but not before he’s been poisoned by nanobots. Through Bond’s earpiece, Q breaks the news to Bond that the nanobots cannot be flushed from his system. Even if Bond were to live despite his wounds, he would be forever exiled by biology from his own child. The nanobots flooding his body ensure that being near his daughter, given the DNA connection, would mean killing her. A tragic figure, stuck on an island and his daughter safely away from him, all Bond can do is wait for the missile strike.

No Time to Die breaks new ground in a number of interesting ways. It is an adroit extension of the brand. A Bond villain sitting down with a psychotherapist (Madeleine) to talk about mothers was a surprise. Bond movies are cultural and fashion events as well as marketing campaigns. Jaguar must rue the day it passed on having its E-type kitted out as a Bond car. Aston Martin, by contrast, has never looked back. Dating to the `70s, the AMV8 looks especially striking in the film.

Beyond the glitz, No Time to Die should be commended. Safin is an example of Adam Smith’s “man of system,” who thinks people can be moved around like chess pieces on a board. He tells Bond that his will be a “neater” world, that “people want oblivion and a few of us are born to build it for them.” By contrast, the message of the film is that liberty requires our vigilance, lest we sleepwalk into seductive fresh tyrannies. And in making moral theology glamorous, No Time to Die wants us to remember that obligations to family, nation, and humankind are the pivot points of the good. The knightly Bond does remember and nobly dies trying to restore a little of the Garden of Eden.