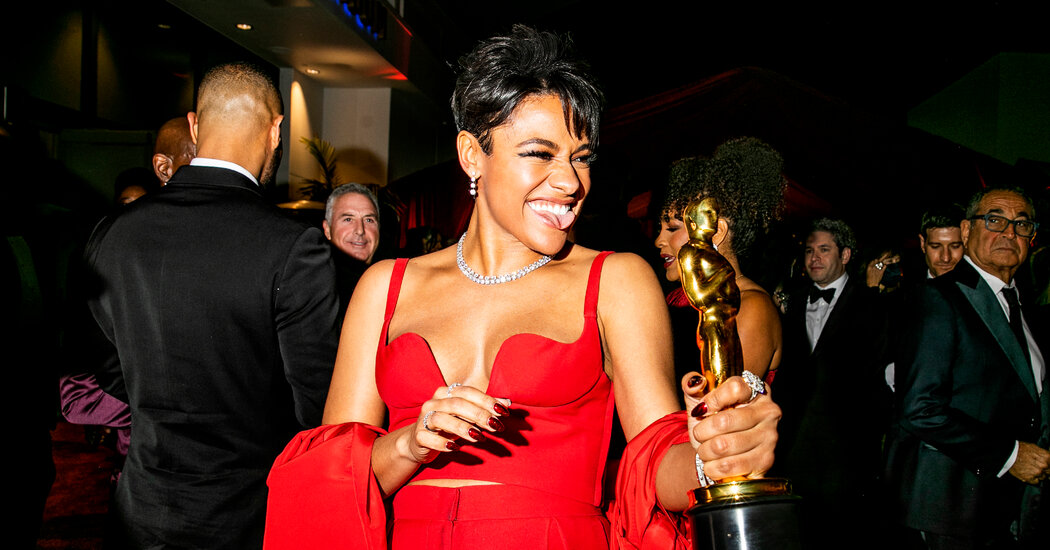 The Governors Ball is the first stop of the final night of an exhausting and bitter award season, where nominees, both winners and losers, can finally breathe, thankful that their months of staying on brand and on message has come to a close.

It takes place just a few escalators up from the Ray Dolby Ballroom itself, a short ride that in most years helps give the party a rarefied feel. Not this year, when all anyone could talk about was the slap seen around the world. It was top of mind for most conversations.

“It hijacked the night,” “It was like watching a car crash in real time,” were just some comments uttered by guests.

Yet not all of the ball’s attendees let the incident ruin their celebration. Anthony Hopkins, who had the dubious honor of winning best actor in 2020 when everyone thought it was going to Chadwick Boseman, took to a relatively empty dance floor with his wife for an energetic salsa.

It was a stark contrast to the Apple team, who skedaddled before you could say “truffle mac ‘n’ cheese.” Jamie Erlicht and Zack Van Amburg, the Apple executives who oversaw the release of “CODA,” which won for best picture, left early with Tim Cook, the Apple chief executive who attended the ceremony for the first time.

The team at Netflix, which was nominated for 27 Oscars and won only one, partied like they were the belles of the ball. Ted Sarandos, the co-chief executive of Netflix, belted out the lyrics to “Ain’t No Mountain High Enough,” while his marketing associate Albert Tello mugged with Jane Campion’s best director Oscar for “The Power of the Dog.” Ms. Campion swayed with Lisa Nishimura, another Netflix executive, while D.J. D-Nice kept the tunes going.

Ari Wegner, who lost out on making history as the first female cinematographer to win an Oscar, didn’t appear worse for wear, thrilled that Ms. Campion nabbed the prize. “All of our nominations are her,” Ms. Wegner said, adding that if it weren’t for Ms. Campion, none of them would have been in that room. “I have nothing at all to complain about.”

Ms. Wegner, who had been in the United States for over a month campaigning, was eager to get back to her home in Australia, comparing the campaign season to being on a movie shoot. “You have no agency over your life for a bit,” she said with a pause. “I would happily do it again.”

D-Nice’s tunes got the cast of “Power of the Dog” onto the dance floor, including Kodi Smit-McPhee, who was holding a rose — either a deliberate or inadvertent nod to his character.

Benedict Cumberbatch found his parents on a couple of high-backed stools, gave them a kiss and escorted them out. It may have served as the cue to leave.

Moments later Ms. Campion began her exit, parting the dance floors with people on either side chanting “Jane, Jane, Jane.” She held up her Oscar in triumph and waltzed out the door.

Tom Cruise in “Top Gun: Maverick” Source: Paramount This weekend Tom Cruise has a chance to do something he’s never done before — open a film to more than $100…

Capital gains may have triggered hundreds of billions more in individual taxes for 2021, analysis shows. How to trim your tax bill