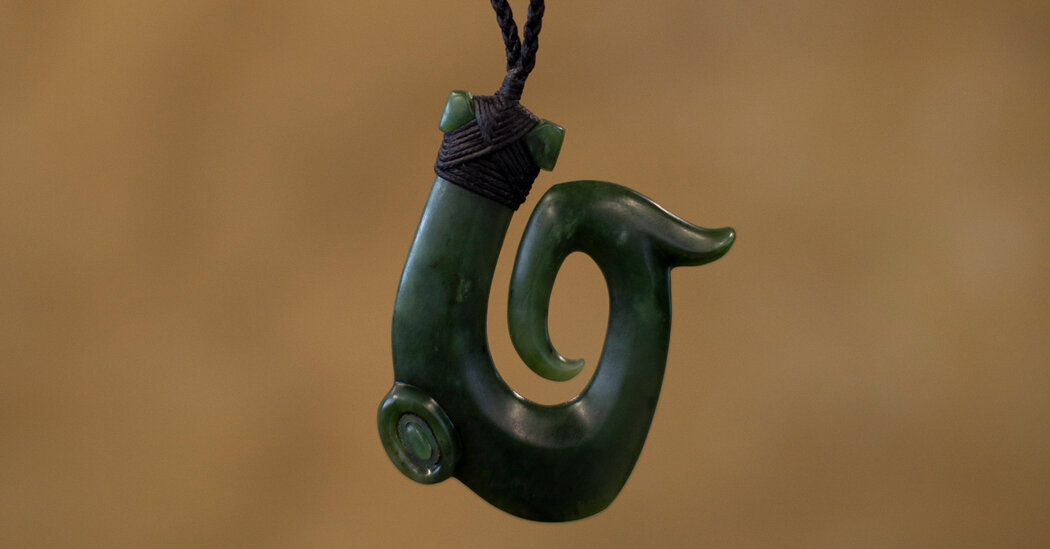 The Maori, New Zealand’s Indigenous people, navigated to the country from Polynesia by sea, some arriving as early as the 10th century. Matau, or fishhooks, were among their tools, fashioned from wood, bone, shell, stone — and pounamu, the Maori name for New Zealand jade or greenstone.

Over time, the hooks became increasingly stylized and now are a popular shape for decorative pounamu pendants called hei matau, the first word indicating that the matau is worn around the neck. Creators say a hei matau gives the wearer strength, safety and good luck for travel, especially across oceans.

There is a common belief in New Zealand that pounamu should be received only as a gift. “We don’t know where that condition came from, but it’s certainly not something from my people,” said Lisa Tumahai, the kaiwhakahaere, or representative, of the tribe Ngai Tahu, based on the South Island. “Since before the settlers came, we were trading pounamu and we were economically prosperous from it.”

The matau has deep roots not only in Maori history but also in some of the culture’s best-known stories. Elementary school-age children in New Zealand learn that Maui, a hero of Polynesian mythology, used a woven fishing line and a hook fashioned from his grandmother’s jawbone to haul New Zealand’s North Island — known as Te Ika a Maui, or the Fish of Maui — out of the sea. Maui was so pleased with his catch, the story says, that he threw his hook into the sky, where it caught among the stars. The constellation Scorpio sometimes is called Maui’s Fish Hook in Maori astronomy.

Pounamu is most commonly actually nephrite, a semiprecious mineral. Nephrite is formed about six miles underground, where the heat and pressure create an incredibly hard stone, making pounamu useful to early dwellers for tools. (Iron and chromium deposits account for its distinctive green hues.) Bands of pounamu were lifted to the surface as mountains formed over millions of years on New Zealand’s South Island, which the Maori call Te Wai Pounamu, or the Place of Pounamu. Over time, erosion has uncovered deposits and the boulders and stones tumble into the island’s many rivers, where they are either gathered or eventually wash into the sea.

In the 18th and 19th centuries, settlers from Britain and Europe pushed Maori off their land and discouraged the use of their language, and by the 1950s laws and regulations prevented their carvers from accessing and working pounamu. Later, pieces of jade jewelry carved with Maori designs sometimes were imported from China. “Our people carried on carving,” Ms. Tumahai said. “Never to the scale that we would have had in the 1800s, but we never lost the craft.” In recent decades, New Zealand’s government has made settlements with iwi, or tribes, to recover what was lost — and in 1997, a law declared that iwi Ngai Tahu was kaitiaki, or guardian, of all pounamu, making it the only privately owned mineral in the country. Today, along with selling or distributing the stone (1,800 pounds every year) to carvers and cultural bodies and managing an accreditation process, Ngai Tahu runs a pounamu jewelry business.

New Zealand’s modern-day laws recognize pounamu (pronounced poe-nuh-moo) as a taonga, or treasure, for the Maori people. “Without the taonga, we don’t have life, so we have to give respect to it,” Ms. Tumahai said. Some of New Zealand’s five million residents wear hei matau, and many of its visitors — 3.8 million in 2019 — buy them as souvenirs. But some tourists have been “horrified,” Ms. Tumahai said, when they realized their purchases did not have the authentication details present on jewelry made of legally sourced pounamu. “We just say a karakia and bless their stone,” Ms. Tumahai said, using the word for a Maori prayer.

As a boy on the South Island’s West Coast, Shannon Mahuika thought carving was the domain of old men but also felt that Maori art ran in his blood. He left school at 15 to work for his father, who made and sold simple pendants, then spent three years in formal training at Te Puia, the national Maori arts and crafts institute in Rotorua, under the renowned carver Lewis Gardiner. He was one of the first students at the institute’s stone and bone carving school, a selective program that accepts applications only from Maori men. (Currently, Ms. Tumahai said, there are 200 to 300 pounamu carvers in the country, about 120 of whom are registered with Ngai Tahu and about 70 of whom are actively working.) Mr. Mahuika, 33, now lives and works in a former school on a lonely stretch of West Coast highway, just minutes from Makaawhio, a river rich in pounamu. “To be on the doorstep of the source of the pounamu, it feels like security of my future,” he said. Mr. Mahuika generally buys his stone supplies, but sometimes he takes his eager nieces and nephews to the river to search for it, as his father did with him.

Traditional pictures and stories — as well as new ideas — inspire Mr. Mahuika, who initially sketches his designs with pencil on paper. He then cuts a stencil to place on the stone, and uses diamond tools to shape it. A bench grinder helps create the curves and detail, and diamond burrs of different shapes and sizes are used to finish the design. Each tool leaves abrasive scratches on the stone, Mr. Mahuika said, and he spends as long cleaning a hei matau — smoothing out the carving marks — as he does crafting it. It is common for a piece to take two days to carve and another two days to clean, like the piece shown here, which will be priced at 720 New Zealand dollars, about $500. “I can’t find it in me to rush it,” he added. His pieces are all one-of-a-kind and he sells through social media and by direct request.

In recent decades New Zealand has experienced a revival of interest in Maori arts and culture — including pounamu jewelry. “There wouldn’t be a day go by when I don’t see people wearing it,” Ms. Tumahai said. But at the same time Ngai Tahu has been battling a growing black market for the stone; on the legal market, it sells from about 30 New Zealand dollars per pound for the poorest quality to about 500 dollars per pound for the best. Raw pounamu cannot be exported legally, but the iwi knows it is being smuggled onto commercial flights and in freight. And despite the fact that many carvers stopped working when the pandemic began and New Zealand closed its borders, the amount of pounamu offered for illicit sale on web forums and social media platforms had increased, Ms. Tumahai said, as people were “desperate” for money. A conservation plan created by the iwi with input from New Zealand’s geological science agency should mean that supplies will not be in danger of depletion — but no one is sure, Ms. Tumahai said, because no one know how much has been removed illegally.

National Endowment for the Humanities Announces $31.5 Million in Grants

A PBS documentary on the 400-year history of Shakespeare’s plays, a New York Public Library summer program for educators on efforts to secure equitable access to education in Harlem in…