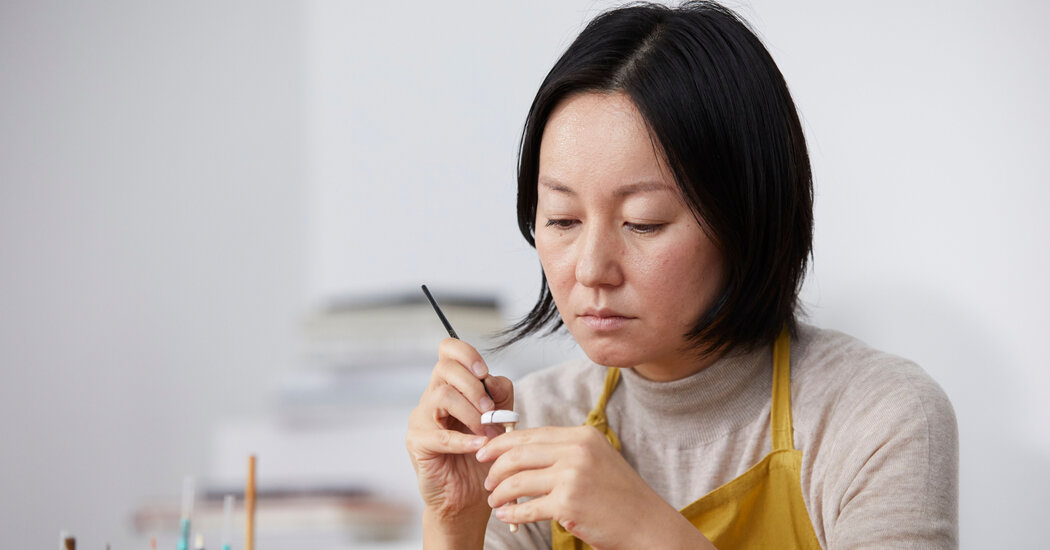 Vincenzo Castaldo, the creative director for Italian jewelry label Pomellato, said he used to call the gems that would break during production “the unlucky ones.” But last year, a few of those specimens experienced a reversal of fortune when they became the focus of a collection highlighting their imperfections.

On a trip to Japan in 2019, Mr. Castaldo suggested a collaboration with Maya Higuchi, a Tokyo-based expert in the art of kintsugi, to apply her skills to gemstones. Kintsugi is a traditional Japanese technique that mends cracked pottery with a lacquer made from the sap of the urushi tree and then accentuates the fractures with powdered gold or other precious metals.

Pomellato is one of several brands that have seized on elements of the process and brought them into the jewelry category. Its Kintsugi collection, introduced early last year, featured damaged jet or cacholong, an opal variety with a milky white color, that Ms. Higuchi repaired, adding 24-karat gold where there were once fractures. The stones then were set in weighty cocktail rings, pendants or drop earrings ($10,350 to $18,400).

“They sold out immediately,” said Mr. Castaldo, but the collaboration has continued as clients now may request custom-made pieces with stones featuring kintsugi repairs. “When we get the prototypes in Milan, we’re never quite sure what to expect. The real value is the interpretation by Maya.”

And the idiosyncratic nature of the pieces are in keeping with the spirit of the moment, he said: “It connects to the present; now, valuing inclusivity and being different is an important part of your beauty.”

The brand also has created a one-off brooch featuring a cameo created in Torre del Greco, long the center of Italy’s red coral and cameo jewelry industry. Acquired by the brand for a special project, the cameo broke while being handled four years ago. It had been kept in the brand’s safe until Ms. Higuchi applied her handiwork, and Pomellato set it in a mounting with a scattering of brown diamonds. It is to be displayed in April at the Pomellato boutique in Venice, to coincide with the Homo Faber fair, a biennial festival promoting artisanal talent, held in the city. (Fortuitously, the theme of this edition happens to be the creative connection between Europe and Japan.)

Theories abound concerning the origin story of kintsugi: According to one story, a Japanese shogun, or ruler, was dissatisfied by the clumsy repair of his tea bowl that was done in China, so local artisans created a more pleasing solution; another holds that samurais devised kintsugi to repair gifts from their masters that became damaged, avoiding what might become grave consequences. “There are thousands of stories like this,” said Iku Nishikawa, a practitioner in Oxford, England, who also teaches the craft. Yet, she noted, it is generally agreed that the practice dates “to about the 16th century.”

Kintsugi is an intensive process, Ms. Nishikawa said. “Urushi lacquer is very difficult to handle and process yourself. It takes a long time to be a proper master.”

George Inaki Root, founder of the jewelry brand Milamore, enlisted one such expert when he wanted to introduce kintsugi in his fledgling brand. (He grew up in Japan, where he first encountered the craft, and now is based in New York.)

He created two one-off pieces using traditional kintsugi technique with help from Kohei Kirimoto, an artisan from the eighth generation of his family to make lacquerware. Mr. Root smashed white and gray mother-of-pearl samples and assembled their fragments into configurations for a pair of earrings and charm, while Mr. Kirimoto applied urushi lacquer to bond them. Only after several weeks’ drying time could 18-karat gold powder be applied to the seams. The final products were patchworks that had the iridescent sheen of mother-of-pearl, the glow of the gold seams and were accented with diamonds.

The Japanese comedian Naomi Watanabe purchased the pendant, and the earrings ($15,600) are for sale at the Milamore boutique in Tokyo.

Mr. Root anticipates creating more pieces in the same vein: “I want Milamore to be a platform to promote and preserve Japanese craftsmanship.” And that may introduce his peers to the craft. “When I first showed the pieces in Tokyo,” he said, “most people my age — millennials — didn’t know what kintsugi was.”

Most of the Milamore Kintsugi collection is inspired by the kintsugi technique without employing it directly. Pieces in 18-karat gold, sometimes with diamonds, feature jagged lines that resemble fissures in broken pottery. Against the skin, the rings, bracelets and other pieces make wearers look as though they have received the kintsugi treatment themselves.

Whether on jewelry or repaired pottery, “the gold emphasizes what was once broken but also strength and resilience,” Mr. Root said. “I have clients who wear them as their engagement rings, or when someone has just gotten divorced, they’ll buy the kintsugi ring for themselves. It is something that applies to every single person.”

Clients’ emotions also have played a role in purchases of jewelry from Edéenne, a Canadian who has an atelier along the high jewelry corridor of Rue de la Paix in Paris. Her largely bespoke projects begin with an extended interview to discover her clients’ stories and, she said, she has employed elements of kintsugi in jewels for clients who “have conquered great challenges.”

In 2021, for example, she crafted a piece that used gold to fill a void in a sliver of oak, making it whole again. “Kintsugi is an art that harnesses emotion,” she said.

For the Seattle-based designer Jamie Joseph, kintsugi-inspired jewels have become a cult favorite for her customers. When an image of a vessel with a kintsugi repair and its accompanying message of “honoring flaws” appeared in her Facebook feed a few years ago, she began exploring how to develop a similar technique for her namesake brand, which includes colored gemstone rings and delicate everyday diamond pieces.

The project had a practical purpose: “We have a bowl that we put all our broken stones into. It was an opportunity to upcycle them.” The resulting collection was called Golden Joinery, one of a few generally accepted English translations for kintsugi. It required reuniting stones that had been broken in half or thirds (“like a jigsaw puzzle”) and developing a manual method to bond the pieces with ribbons of 22-karat yellow gold.

“Working with these pieces is a meditative, thoughtful, labor-intensive process,” Ms. Joseph said. “They take a long time.”

The first time she offered the pieces, in 2015, “they immediately sold out,” she said. But, despite that popularity, she has been creating new pieces only when stones break during production of her other collections. “It is important to me that we are actually upcycling. I don’t want to find a cool stone and cut it open.”

Even without using cracked and broken gemstones, Jennifer Dawes of Dawes Design in Santa Rosa, Calif., found a way to pay tribute to the kintsugi heritage.

Her Fault Line collection “celebrates imperfection and is inspired by kintsugi,” she said. To create the pieces, she uses waxes to trace the course of a stone’s inclusions across a gem’s surface, whether it be slices of watermelon tourmaline, boulder opals, tanzanites, sapphires or others. The snaking shapes are replaced with gold when cast, highlighting crevices and flaws.

“The jewelry world has been so traditional and so conservative. And our society is so obsessed with perfection,” Ms. Dawes said. “I just wanted to do something to get away from that.”