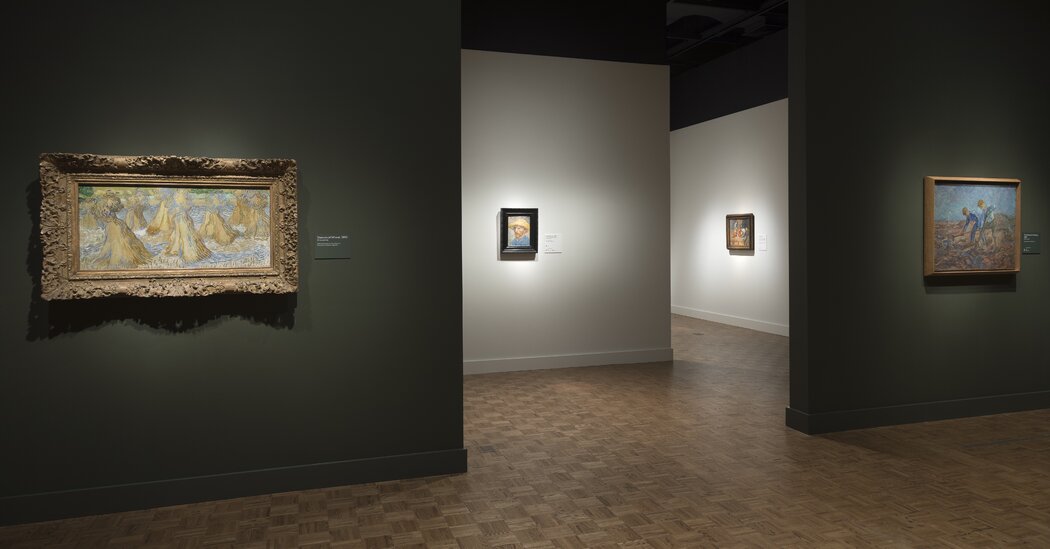 This article is part of our Fine Arts & Exhibits special section on how museums, galleries and auction houses are embracing new artists, new concepts and new traditions.

DETROIT — On a freezing New York evening in early 1922, Ralph H. Booth placed a winning bid of $4,200 for a small self-portrait of Vincent van Gogh in a half-furled straw hat in an auction at the Plaza Hotel.

Mr. Booth was the president of the commission that oversaw the Detroit Institute of Arts, and he had just bought the first van Gogh to be owned by an American museum.

Van Gogh was only beginning to develop a following in America, and buying the self-portrait seemed risky. But a little more than a decade later, van Gogh had become a superstar. Prices for his paintings were rising, and his intense, throbbing work was drawing big crowds to a huge solo exhibition at the Museum of Modern Art.

Now, 100 years after the Plaza Hotel auction, the Detroit Institute of Arts is celebrating its milestone purchase with a wide-ranging exhibition that tracks van Gogh’s rise in America, from near-obscurity to undreamed of celebrity.

The exhibition, “Van Gogh in America,” opened earlier this month, and runs through Jan. 22. It spotlights 74 van Goghs — paintings, watercolors and drawings, along with a lithograph and an etching — plus a half-dozen works by Cézanne, Gauguin, Matisse and others.

The exhibition, centered on the first half of van Gogh’s 20th century stardom, is one of the biggest and most comprehensive van Gogh shows and, the museum says, the first to focus on how he and his work captured the imagination of America.

“We’re not only telling the story of how Americans and American museums collected van Gogh,” said Salvador Salort-Pons, the director and chief executive of the institute. “But also, how the image of the artist was shaped in the minds of Americans.”

The first painting you see in the exhibition is of van Gogh’s yellow-toned, rough wooden chair with a woven straw seat, painted in Arles in southern France in 1888, two years before he died at 37.

The empty chair, said Jill Shaw, the curator of the show, captures the spirit of the exhibition. “It’s his own chair,” she said. “But he’s not in it. He never came to America. He’s everywhere in the show. But he’s not here.”

Van Gogh’s first big break in America came at the Armory Show in New York in 1913, an exhibition of 1,300 works that was America’s introduction to modern art. The show traveled to Chicago and Boston, with van Gogh sharing the walls with Picasso, Matisse, Duchamp and other now-revered artists.

Nearly a dozen van Goghs from that show are in the Detroit exhibition.

Van Gogh got another significant boost when the Montross Gallery on Fifth Avenue mounted a spectacular one-man show of 67 works in 1920, and kept displaying them in different formats for three years.

A half-dozen paintings from the Montross Gallery exhibitions are in Detroit, arranged in a shrine-like gallery around a portrait of van Gogh’s sister-in-law, Johanna van Gogh-Bonger, holding her son, Vincent Willem van Gogh.

Ms. van Gogh-Bonger played a powerful behind-the-scenes role in the two New York exhibitions and in many other shows, as the owner of hundreds of van Gogh paintings and drawings, passed on to her when Vincent and his closest brother, Theo — her husband — died a few months apart, Vincent in 1890 and Theo in 1891.

Van Gogh had sold only a handful of his paintings. His sister-in-law, a 28-year-old English teacher, took it upon herself to get recognition for him and his work. At first, she got the cold shoulder from the art world. But dealers, collectors, artists and other early van Gogh fans started helping her.

The work began catching fire in Europe, and she talked up van Gogh in New York. She provided about half of the van Goghs in the Armory Show and, after moving to New York in 1915, she supplied all the paintings and drawings for the Montross exhibitions.

In 1921, she and the gallery placed four van Gogh paintings in the Metropolitan Museum of Art’s first exhibition of Impressionist and Post-Impressionist art.

Not one of van Gogh’s works sold in the Armory exhibition, and only three were sold after all the Montross Gallery campaigning. But tens of thousands of Americans saw their first van Goghs.

She died in 1925 just before her 63rd birthday. When the Museum of Modern Art mounted a big solo van Gogh exhibition in 1935, her son, Vincent Willem van Gogh, and a Dutch foundation supplied most of the works. The exhibition traveled to eight American cities and Toronto.

Van Gogh’s great-great-grandniece, Janne Heling, the chairwoman of the Vincent Van Gogh Foundation in Amsterdam, and her mother, a former chair of the foundation, Josien van Gogh, attended a dinner of about 200 sponsors and lenders of art for the exhibition shortly before the official opening of “Van Gogh in America” on Oct. 2. Josien van Gogh is one of the voices on the exhibition’s audio guide.

The museum’s self-portrait of van Gogh — the reason for the show — gets a wall of honor to itself, followed by paintings by Gauguin, Cézanne, Matisse and other modern artists that it exhibited in March of 1922 along with its new acquisition.

By 1935, museums in Chicago; Kansas City, Mo.; St. Louis; and Toledo, Ohio, had acquired van Goghs. The museums and some of their van Goghs are saluted as pioneers in a gallery to themselves. Now, dozens of American museums own van Goghs.

Three galleries trace van Gogh’s painting life — very much as the landmark 1935 Museum of Modern Art show did — starting in the Netherlands; passing through Paris, Arles, and the asylum in St. Rémy where he lived for much of a year; and ending in the village near Paris, Auvers-sur-Oise, where he died from a gunshot wound. Whether he committed suicide is still debated.

Hollywood has had a big impact on van Gogh’s place in the minds of Americans. And the final gallery is all about Hollywood and van Gogh.

One of the most influential movies, art historians say, was the 1956 production, “Lust for Life,” starring Kirk Douglas as van Gogh. The makeup crew used the museum’s self-portrait of van Gogh as their guide for making the actor look like the artist.

In the film, based on the best-selling 1934 biographic novel of the same name, the camera lingers on van Gogh paintings. “They are like characters in the movie,” Ms. Shaw, the exhibit curator, said. Most of the van Goghs in the Hollywood gallery played roles in the film.

Art historians say the movie sensationalized the worst moments of van Gogh’s life. But the novel and the movie touched Americans and added a shot of adrenaline to his celebrity.

One of the most prized van Gogh paintings, “The Starry Night” — owned by the Musée d’Orsay in Paris — shares a riveting scene in “Lust for Life.” It is the last painting you see as you leave the exhibition.