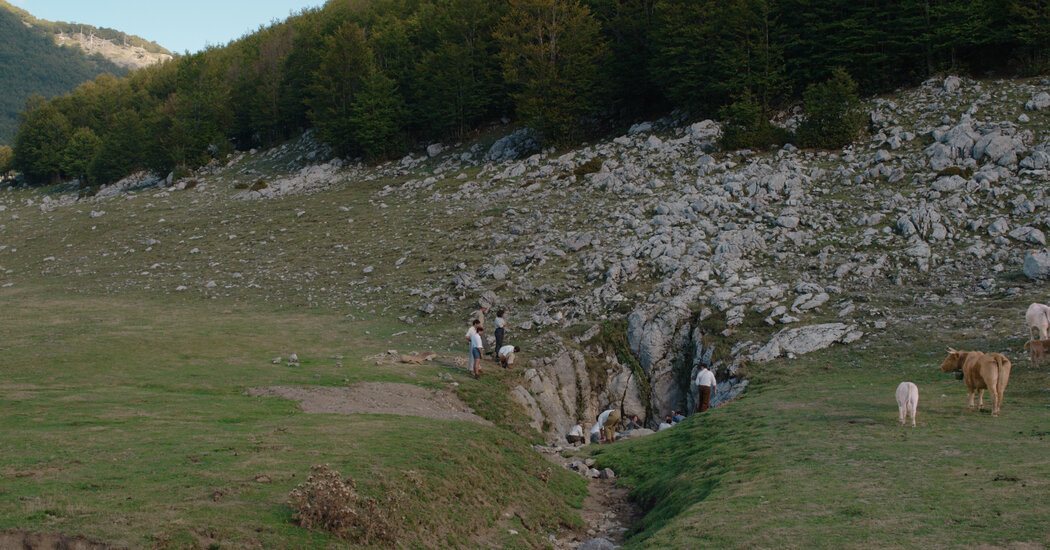 In the first shot of “Il Buco” — the title, accurate and perhaps overly modest, is the Italian word for hole — the camera, positioned underground, gazes upward at a patch of sky fringed with grass. Cows poke their heads into the frame, setting a tone of quiet rural rumination that the director, Michelangelo Frammartino, will sustain for the next hour and a half.

The opening also establishes a perspective that is at once straightforward and philosophically complex. “Il Buco” is a historical film, carefully reconstructing the 1961 exploration of a previously unmapped cave in Calabria. It’s also a landscape film, mesmerized by the sublimity of this verdant, rocky stretch of countryside.

Like Frammartino’s previous feature, “Le Quattro Volte” (also shot in the Calabrian countryside), this one adopts a rigorously objective, pointedly nonhuman point of view. Whether you are looking up from mouth of the cave, down into its murky, winding depths or across the cloud-swept valley whose floor it scars, you are seeing the world as it might look through the disembodied eyes of nature or time itself. That effect is established through slow, static, long-distance shots and a sound design that treats human speech as no more significant than bird song, dripping water or rustling leaves. Frammartino connects the physical with the metaphysical. The world as he renders it is an anthology of concrete objects and unrepeatable moments that are somehow infused with abstract, even spiritual meanings.

There are people in this movie: a team of speleologists who have come down from the North to descend into the cave and chart its shape; residents of the village at the edge of the valley; a wizened herdsman who lives alone in a cabin on a hillside. But with the exception of that solitary fellow, who occasionally appears in close-up, none of these human figures function as characters in the usual sense. We don’t know their names. The Italian dialogue is unintelligible, and no subtitles are provided.

Well, almost none. Early on, some of the locals gather to watch a television in a small piazza outside a bar, taking in a jaunty news broadcast about the recently completed Pirelli Tower in Milan, at the time the tallest skyscraper in Italy. A reporter, traveling up the side of the building on a window-washing platform, peeks in at the office workers and tire-company executives going about their routines, offering a packaged spectacle of urban capitalist life as something both marvelous and banal.

The Calabrian semiwilderness is the antithesis of Milan, Frammartino’s methods are the opposite of television, and the spelunking expedition offers a reverse image of the architectural ambition that erected the Pirelli Tower. Speleology is about digging down instead of reaching up, reflecting an ambition grounded in humility rather than hubris. The explorers descend on rope ladders into a damp subterranean maze, sketching their path on notebook pages. They sleep in tents on the valley floor, their campsite occasionally visited by grazing cows.

“Il Buco,” in recounting a visit to the actual underworld, carries a hint of mythology, an awareness of old mysteries and superstitions. But rather than evoking the tales of Orpheus or Persephone, it excavates their deep sources in the actual world. The bottom of the cave isn’t a metaphor; it’s where metaphors come from.