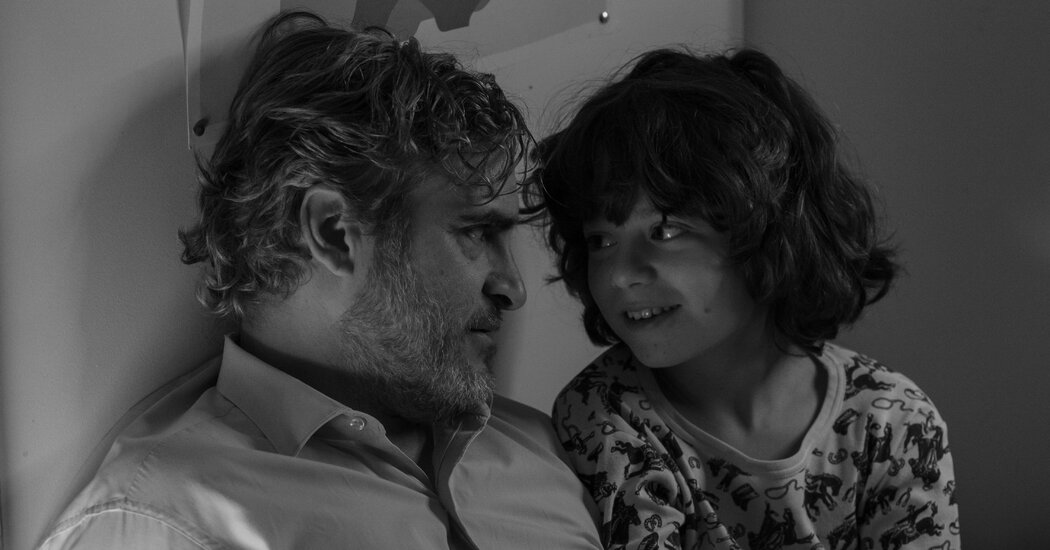 “Hello, everyone. My name is Mike Mills, and I’m the writer/director of C’mon C’mon. So this scene’s between Joaquin Phoenix’s character, Johnny, who is an uncle to a kid named Jesse, who’s played by Woody Norman. He has never had kids himself. And so in this film, he’s thrown into being the sole caretaker of this kid for a while, and has to learn parenting very quickly. And in this scene, they just came from their first night in New York City, and the kid outsmarted him and ate a ton of sugar during dinner. And they’ve come home, and he’s trying to just get him to go to bed, which is impossible. So in a way, it’s almost like a romantic comedy, the story. Like, they meet. They have almost, like, a meet-cute, right? And the love affair starts. And this is where the love affair starts to have complications, and harder layers start to work in. I wanted to show a scene that seems inconsequential. Like, the kid lied to me about their toothbrushing, the kid ate more sugar than they know how to handle, the kid won’t go to sleep, the kid won’t stay in their bed, the kid keeps coming into my bed, right?” “Are you O.K.?” “My friends don’t talk with me, because I don’t really have friends. I mostly hang out with adults.” “No. Jesse, no. Back to bed.” “I think all parents will really relate to that. And that happens a lot. But then the kind of deeper level that happens is maybe because of the kid’s exhaustion or exhilaration from the sugar, starts asking all these kind of really intense questions about his mom, who, obviously, the Johnny character knows in a different way, because it’s his sister, right? And they start to get into, like, these heavier layers, more complicated layers of their relationship. That’s what I was trying to get to.” “Can you tell me about mom when she was a little girl?” “I said she was cute. He said—” “I heard about her boyfriends. And she ran away, and she got in trouble all the time. And I heard that she got an abortion.” “And this thing that often happens to me as a parent— you’re trying to share something intense and complicated with your kid, and you just feel like you’ve failed. You just feel like you did not do a good job of showing up or articulating something.” “You know, a woman’s body is— like, I mean, every person— you have the right of your own body. And a woman certainly has the right— like, it’s called the right to choose.” “And actually, this young little person has judo flipped you in, like, three different ways, and you’re just sort of knocked out by the end. So I wanted to show that feeling of, like, being just stretched beyond what you know how to do.” “Rest your legs.” Rest your hands.” “There’s another really cool part to this. So that’s intercut with Joaquin talking into the mic, right? He’s doing kind of— he’s a radio journalist, and he’s doing his diary, or something like that. He’s trying to remember things, and he’s just discussing this night, which we’re seeing. So the scene kind of plays out in two different times, right? When you see him doing that part of the scene where he’s talking in the microphone, we shot that a day or two afterwards. And he’s actually remembering, and sometimes doing something that I wrote, but often, just, like, his memory of what that scene was like.”