Pete Davidson was initially slated to be the next headline-grabbing name to take flight aboard the suborbital space tourism rocket developed by Jeff Bezos’ company, Blue Origin, after the commercial space-faring company launched several other famous faces on its previous flights.But the comedian abruptly dropped out of the mission after a schedule change pushed the flight back by a week. His seat was given to longtime company employee Gary Lai, the chief architect of the very rocket he’ll fly on. Lai will be joined by five paying customers who had the means to dish out an undisclosed sum for one of the coveted crew capsule seats.Liftoff of the New Shepard launch vehicle is slated for Tuesday at 8:30 am CT from Blue Origin’s facilities near Van Horn, Texas. Those interested in catching the action — which is expected to look much like Blue Origin’s three earlier suborbital jaunts — can tune into Blue Origin’s webcast Tuesday morning. 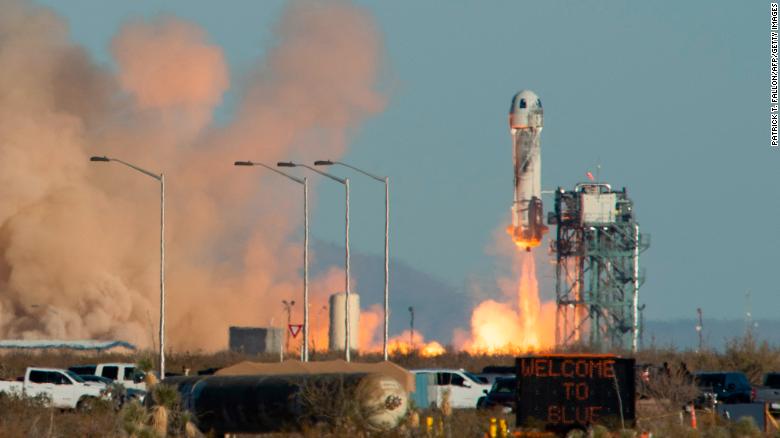 A Blue Origin New Shepard rocket launches on December 11, 2021, in West Texas near Van Horn.The flight will be brief. It’s an approximately 10-minute up-and-down excursion that will kick off with the rocket firing up its engines and reaching more than three times the speed of sound as it propels the crew’s capsule to more than 60 miles above the Earth’s surface. The passengers will experience a few minutes of weightlessness and sweeping views of the planet below, before gravity drags them back to Earth and the capsule deploys parachutes to ensure a gentle landing near the launch site.

It’s not immediately clear how much the paying customers on this mission forked over, and Blue Origin has not disclosed a fixed ticket price. But we do know at least one would-be passenger won an auction for a ticket to fly alongside Bezos last year for a whopping $28 million. (That passenger, however, did not end up flying on Bezos’ flight.) We also know another player in the suborbital space tourism game, Virgin Galactic, is selling its seats for $450,000 a piece. Whether the passengers paid a few hundred thousand bucks or a few million, it’s safe to say that these missions won’t be affordable for the average consumer anytime soon. 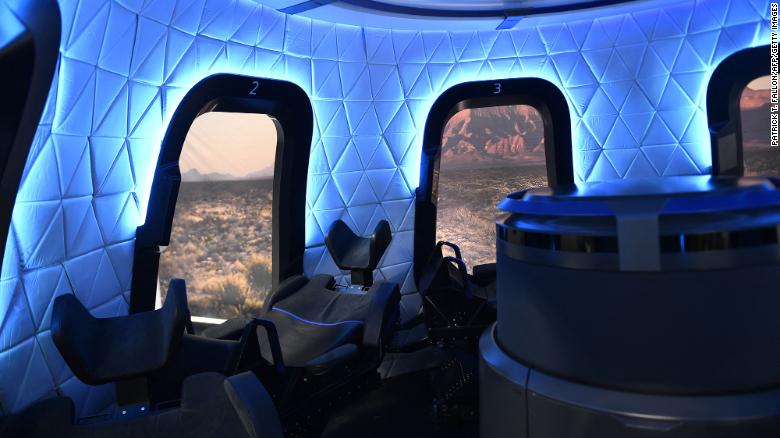 The interior of a Blue Origin capsule on display on December 11, 2021, in Van Horn, Texas.Here is a look at some of the next space tourists set to launch on Blue Origin’s mission next Tuesday.

Lai, the only non-paying passenger on Tuesday’s suborbital flight, was among the first 20 employees at Blue Origin after joining the company in 2004.
He’s been credited as the “architect of the New Shepard system,” and holds multiple patents related to the launch vehicle, according to a statement from Blue Origin. During his time as an undergraduate at Cornell University, Lai studied under the prolific late astronomer Carl Sagan.

Lai will be the second Asian-American passenger to voyage to the edge of space on a suborbital spaceflight, after Virgin Galactic employee and Indian-American aeronautical engineer Sirisha Bandla joined Richard Branson on his spaceflight last year. The industry is running abruptly into societal issues for largely being accessible to the white, male and wealthy, so far.

Marty Allen is an angel investor and former chief executive of a party supply store and a closet design company.The Pennsylvania native now lives in California. In an interview with Philadelphia-based local news station WPVI-TV, Allen said that visiting space has been a dream of his since childhood.”I’ve loved aviation from the time I was a kid,” he said. “I used to build rockets and play with them as a kid. I always dreamed about space.”Allen added that each passenger was given a small bag to take aboard the suborbital trip, and revealed that he is packing his with an American flag that is 60 feet by 10 feet to bring along on the journey.”I’m going to take it up with me, and when I come back home, I’m going to erect a really big flagpole on my property and fly that flag,” Allen told the local news outlet.

Jim Kitchen is an entrepreneur and faculty member of the University of North Carolina’s Kenan-Flagler Business School, where he teaches classes on how to start “social entrepreneurial ventures and raise funding,” according to his university bio.An avid traveler who documents his trips on Instagram, Kitchen has visited all 193 U.N. member countries. But like the other passengers, he says visiting space has been a longtime dream.”One of my earliest childhood memories was sitting in my mom’s lap at the beach in Florida and watching an Apollo mission launch, just looking up and seeing that rocket go up to space,” Kitchen said in an interview with a UNC business school publication.While he’s already seen much of Earth from down below, he said he’s really excited about viewing the planet from above.”Given everything that’s going on right now in the world, seeing this borderless planet from space is really important to me,” Kitchen said.

George Nield is the president and founder of Commercial Space Technologies, a company that aims to promote and facilitate commercial space activities. He previously worked as an associate administrator for the Federal Aviation Administration Office of Commercial Space Transportation, according to Blue Origin, where he was responsible for licensing and regulating commercial launch activities.While he spent much of his career on the regulatory side of the budding space tourism sector, Nield expressed excitement about finally being able to experience the “magic” of the journey firsthand.”Some folks have asked me why I would want to go on a suborbital spaceflight,” he wrote in a March 14 tweet. “Here’s my answer: To see black sky and the curvature of the Earth, and to experience the ‘magic’ of weightlessness.”

Sharon Hagle will be lifting off alongside her husband, Marc Hagle, on Tuesday’s flight — making them the first married couple to jointly fly on a commercial spaceflight.

She is the founder of SpaceKids Global, a nonprofit that works to encourage students — and especially young girls — to pursue careers in science, technology, engineering, art and mathematics (so-called STEAM programs). The organization hosts national essay competitions and organizes speaking engagements at schools aimed to inspire the the next generation to pursue careers in the space industry.Sharon Hagle has the goal of experiencing spaceflight via all three companies currently operating in the arena: Blue Origin, SpaceX and Virgin Galactic, per per her SpaceKids Global bio.

Marc Hagle is the chief executive of a residential and commercial property development firm based in the Orlando, Florida area.Some fifteen years ago, the Hagles reserved tickets to fly on a future Virgin Galactic flight after they celebrated a wedding anniversary by experiencing near-weightlessness aboard a Zero Gravity Corp. jet, he told his local newspaper Florida Today.

Now that the couple’s longtime dream of experiencing spaceflight are coming into fruition, Marc Hagle told Florida Today, “I can’t even begin to tell you how excited we are.””We’re very honored to be able to do it,” he added. “And we’re having a lot of fun with it.”

Every day, data and analytics touch our lives in ways that we can’t begin to imagine. As an example, it can be seen when you log on to a video…