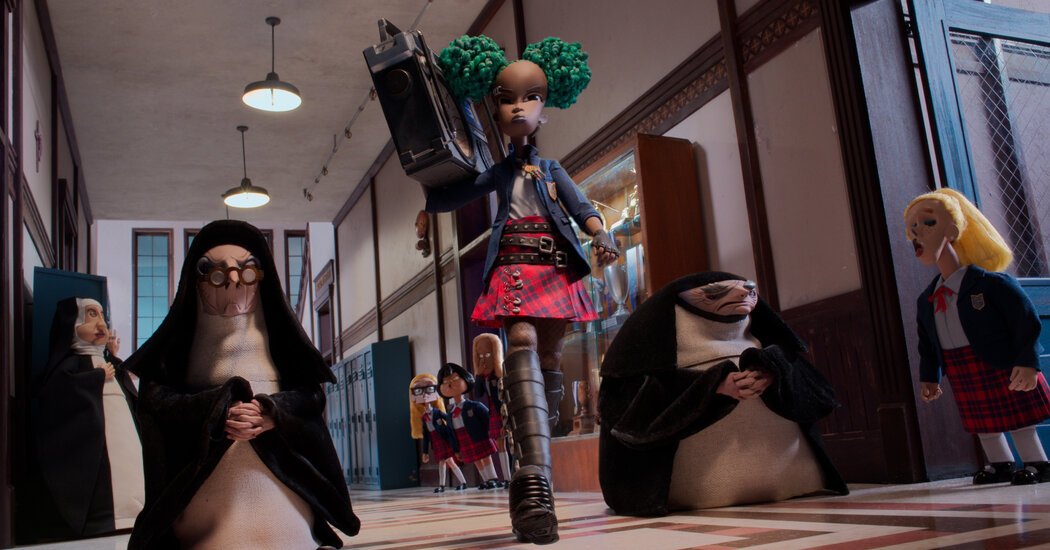 Nearly two decades ago, the uncanny forces inside Henry Selick’s own home inspired him to summon the original concept for “Wendell & Wild,” his first stop-motion animated feature in 13 years, which is streaming on Netflix.

“My two grown sons were once little kids who acted like demons sometimes, so I did a loose drawing of them as demons,” Selick, 69, said by phone. Based on that personal doodle, he wrote a seven-page story about the mishaps of two diabolical brothers, Wendell and Wild, trying to escape hell and come to the land of the living to become rich.

To materialize this idea many years later, Selick, an accomplished animation veteran whose credits include “James and the Giant Peach” (1996) and “Coraline” (2009), joined talents with the comedian-turned-director Jordan Peele, long before “Get Out” positioned Peele as a hit-making genre storyteller. Their shared ability for weaving horror and comedy cohesively in their work made for great synergy in their artistic partnership.

“The best thing about Jordan, besides that he’s a genius — as a comic, a writer and now as a horror director — is that he loves stop motion animation and he knows all about it,” said Selick. “Even the logo for his company, Monkeypaw Productions, is stop-motion animation.”

In 2015, Selick approached Peele and Keegan-Michael Key about collaborating. A fan of their Comedy Central sketch show “Key & Peele,” the filmmaker thought the duo would make the perfect Wendell and Wild. They were both interested, but Peele wished to become further involved by helping to shape the narrative. He shares screenplay credit on the film with Selick.

“When Henry reached out, he didn’t know I was already a huge fan of his, ever since ‘The Nightmare Before Christmas,’” said Peele during a recent call. “He is a modern-day Roald Dahl in how he can weave the humor and the horror into a whimsical and perfectly inappropriate package.”

Originally, Sister Helley (voiced in the film by Angela Bassett), a nun battling supernatural entities at an all-girls boarding school, served as the protagonist of Selick’s story. But because of Peele’s desire for this creation to look and feel unlike any stop-motion vision he’d ever seen before, the spotlight shifted to Kat, one of the young pupils at this institution who lost her parents in an accident.

Selick worried that after directing “Coraline,” making another humorously frightful fable centered on a young heroine would seem as if he were repeating himself. Ultimately, Peele’s argument to not only make Kat the lead but also to make her Black convinced the animator. Kat became the angsty Hell Maiden who ushers Wendell & Wild into our realm.

Lyric Ross, who voices Kat, understood the unique significance of her character.

“I thought her style, her hair, even her mean mug was dope,” said Ross. “I personally had never seen a little dark-skinned Black girl being in a stop-motion picture and being the star of it. I loved everything about her, down to her sick boots.”

“I knew that if I had seen a film in Henry’s style featuring someone who looked like her, it would’ve been really life-affirming of my place in the world as a kid,” noted Peele.

But when it came to the look of the characters Wendell and Wild, at first Peele and Key were hesitant of Selick’s intentions to use their likeness. It wasn’t until the director showed them the designs by the Argentine artist Pablo Lobato, who specializes in unique caricatures of celebrities, that their perspective changed.

“Keegan and I spent so much time dressing up and doing all these characters on ‘Key & Peele’; in a way, becoming these animated demons felt like the ultimate dress up,” said Peele.

From the conversations between Peele and Selick, another subject also grew in prominence in the film: the prison industrial complex as a malevolent force. As with his live-action efforts, Peele never sought to sermonize but only to spark dialogue about important social topics.

“What we owe the younger generation is the ability to have the language and references that we didn’t have, so they can discuss all things,” said Peele. “I believe in pushing the boundaries of the art form for the sake of creating a bigger pool of understanding.”

Although they didn’t set out to receive a PG-13 rating from the Motion Picture Association of America, Selick admits that they hoped for that classification because of the creative freedom it offered them. He recalls facing pushback from executives who argued a PG label would enable them to reach a wider audience. But he disagreed.

“Let’s face it, a 10 or 11-year-old does not necessarily want to watch a PG movie,” said Selick. “They want to watch what their big brothers and sisters watch.”

Kindred devotees of the bizarre, both Selick and Peele credit their mothers for their affinity for offbeat animation. Selick remembers his mother’s love for Halloween and watching “The 7th Voyage of Sinbad” and the “Night on Bald Mountain” segment of “Fantasia” with her.

Similarly, Peele holds dearly to the memory of the night his mother took him to see Selick’s “Nightmare Before Christmas” as a teen. “My mother knew that this was going be a special film,” he said. “She even got me the toys for it, even before the movie came out.”

With “Wendell & Wild,” Selick didn’t try to advance stop motion on a technical level but instead went back to basics. In aiming for a more raw aesthetic that showed how these worlds and characters are physically manipulated by the hands of artists, he decided to keep the face seams on the puppets instead of digitally removing them, as they did on “Coraline.”

“I wanted to retreat to what’s at the heart of what we do,” said Selick. “We touch these things and we breathe a performance into them.” Peele agreed with that sentiment, describing stop motion as a technique that “appeals to something innate, magical and childlike in all of us.”

“The craftsmanship Henry and his puppeteers perform is something very special that only few people know how to do,” added Peele. “He’s the best in the world at it.”

Selick believes that it was Peele’s success with “Get Out” that allowed them to set up this movie at Netflix — the only company that promised them the resources to make it as they had envisioned it.

“We’re cousins in a way,” Selick said. “Jordan is much younger than me, but he has a worldly knowledge of cinema and likes a lot of unusual, weird and fun things.”

For Peele, the foundation of their fruitful bond was the mutual and sincere admiration between them. “We’re each other’s biggest fans,” said Peele.