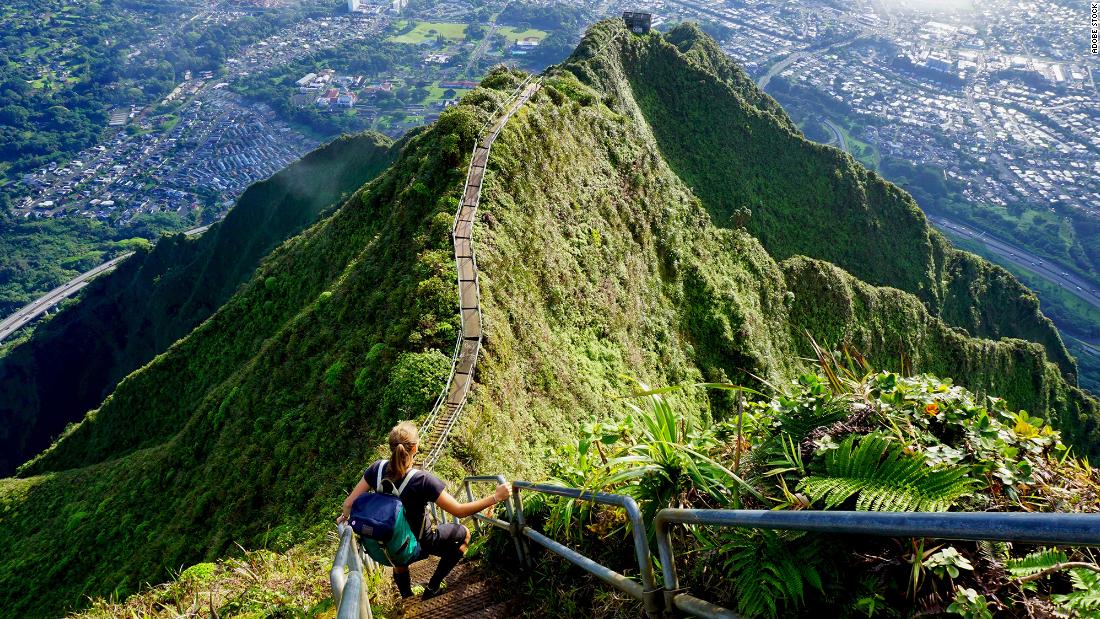 (CNN) — Hawaii’s famous Haiku Stairs, sometimes called the Stairway to Heaven, are likely to be removed next year following a Honolulu City Council meeting to discuss ongoing issues with the site.

The stairs, whose 3,922 steps wind through a 2,800 foot mountain trail in Kaneohe, on the eastern side of Oahu, were originally built by the US Navy in the 1940s.

The stairs reach a dramatic apex through the clouds and many locals consider the view to be the best in all of Hawaii.

In 1987, the stairs were permanently made off-limits to the public. But that didn’t stop hikers, YouTubers, thrill seekers and other tourists from sneaking into the site. There have been numerous injuries there over the years, most recently a 24-year-old who hurt his knee and had to be airlifted out in April.
“Due to rampant illegal trespassing, Haiku Stairs is a significant liability and expense for the city, and impacts the quality of life for nearby residents,” councilmember Esther Kiaʻāina told CNN affiliate Hawaii News Now. Kiaʻāina, whose district includes Kaneohe, authored Resolution 21-154, the proposal to remove the stairs.

On September 8, the Honolulu City Council voted unanimously in favor of removing the staircase for good.

The measure was then sent to Honolulu Mayor Rick Blangiardi. He is expected to approve the removal of the Haiku Stairs and allocate $1 million of the city’s budget to cover the expense. He has 60 days to make a final decision.

“Fundamentally, it is inappropriate to have a high-use tourist attraction entering through this residential neighborhood, which lacks the capacity to provide appropriate facilities or parking,” the mayor wrote in an email to local outlet the Honolulu Civil Beat.

“In addition, there is no unrestricted access to the stairs and the primary landowner at the base made it clear it is not interested in providing access. Consequently, my administration is aligned with the City Council’s resolution to remove the stairs and we intend to move forward with the necessary plans.”

Once the measure is formally approved, the mayor’s office must establish a timeline for the stairs’ removal and destruction.

Currently, there is a maximum $1,000 fine for people caught trespassing at the Haiku Stairs.

CNN has reached out to the Honolulu Board of Water Supply, which owns and manages the site, for comment.