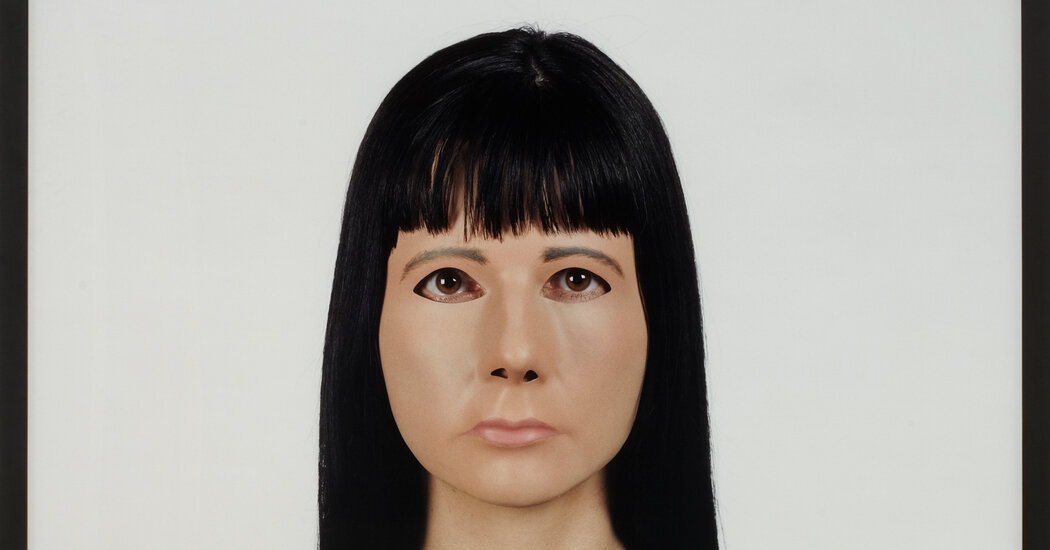 Gillian Wearing, one of the Young British Artists (or Y.B.A.s) of the early 1990s, sailed to success on a tide of provocative confessional work. The confessions weren’t her own: Using masks, cue cards, and other distancing devices, she has been able to convince a stream of ordinary people to disgorge their most shameful secrets on camera.

Since 1997, when she was awarded the Turner Prize, Wearing, now 57, has covered a lot of ground. She’s continued to amass confessions in photographs and on video, and she’s made elaborate self-portraits in which she, too, appears in disguise. She’s also been commissioned to make public sculptures of average citizens, constructed ingenious lightbox videos that look like still photos till they startle you by moving, and even, during Covid lockdown, run off a smattering of paintings.

Samples of all this work are now installed in an expansive new retrospective at the Guggenheim, her first in the United States. Aptly, if inevitably, the show is called “Wearing Masks.” Despite its variety, though, everything in it revolves around a single question: Who are you, and can I ever really know you?

It’s a question she addresses to her family, friends, strangers and herself, and it could, given a chance, lead into rich psychological, philosophical or even theological discoveries. But Wearing is so fascinated by the question that she’s never willing to let it go that far. She typically strips the stories she amasses of their context and makes sure that when she does appear on camera herself, it’s never too revealing.

When her approach works, it powerfully destabilizes the way you understand what you’re looking at, and can even enlarge your sense of what’s possible in art. When it fails, it feels exploitative and suffocating. Frequently, it’s all of the above.

Wearing first becomes entranced with the challenge of getting to know strangers — a stand-in for empathizing with people in her own life — in “Homage to the woman with the bandaged face who I saw yesterday down Walworth Road,” a short video from 1995. Seven minutes long and narrated exclusively with subtitles, the video purports to document a memorable London encounter and Wearing’s own curious reaction to it. Catching sight of a paperwhite face, Wearing realizes it’s a woman wearing a mask of bandages; later, unable to forget the image, she dons bandages herself and sets out to record strangers’ reactions to her inhuman new visage.

It looks like a true story of Wearing’s own, a sincere account put together with hand-held camera work and patchy sound — and indeed, she did really see a bandaged woman. But the video is more sophisticated — and less trustworthy — than it lets on. Is Wearing an actor or a character? And when a subtitle claims, “I was tormented by adverse reactions to my appearance,” even as you watch her deliberately provoking responses, the contradiction seems designed to underline the deceptiveness of the medium.

For a striking photo series she made around the same time, titled “Signs that say what you want them to say and not Signs that say what someone else wants you to say,” Wearing shot people holding large sheets of paper lettered with a panoply of political slogans, religious messages, fragmentary non sequiturs, and dire disclosures that they chose themselves. (Wearing made more than 100 of these photos; 63 are shown here.)

The images alone are full of information — facial expressions, bodily postures, clothing choices, all sorts of handwriting and ways of holding a sign — but the written content itself is fascinating, too. “Today is a wonderful day because Krishna made it,” one man wants you to know, while another presents the gnomic advice, “Cut off the head and the body will die.” A confident businessman says simply, “I’m desperate,” and a woman smiles as she presents the sentence, “I’m depressed at the moment.” However suggestive the details, though, they all point to so much more unsaid that in the end you’re left with the unsettling suspicion that you can never really know what anybody is thinking.

In two large series from the mid-aughts, Wearing meticulously recreates family photos (“Family Album”) and art-historical portraits (“Spiritual Family”), using highly realistic silicone prostheses to play every role. As explorations of artistic or genetic ancestry, they’re not especially compelling. But as meditations on the limits of both photography and empathy, they’re quite effective.

Walking past Wearing’s parents and siblings, or her artistic forebears, you might take the images, so to speak, at face value. But once you notice the eyeholes, and realize you’re looking at masks, you can’t help searching Wearing’s gaze for expressions. Are her eyes really colder and more ethereal when she plays the German social portraitist August Sander? Does she manage to make them look warmer in a mask of the New York street photographer Weegee? Or are you just attributing human expressions to plastic faces you happen to recognize?

Still, there’s a slippery line between exposing epistemological uncertainty and imposing it. In a series of polyptychs, “A Woman Called Theresa,” Wearing pairs photos of the woman in bed with seven different lovers, all “street drinkers” like Theresa, with actual notes the men have written about her, most of them disparaging. Because Wearing lets this information, however partial and edited, speak for itself, the results are heartbreaking.

“Fear and Loathing,” the latest in a series of videos in which people divulge their secrets while wearing creepy masks, is different. A man with a doll’s head describing his inexplicable mayonnaise phobia is kind of funny, though the joke may still be on him. A woman recounting horrific sexual abuse she’s suffered — in a similarly off-putting plastic face — is simply infuriating, less an exposure of our inability to understand the woman’s pain than Wearing willfully refusing to let us try.

In her most recent works — a vitrine of Polaroid selfies, a wall of computer-aged self-portraits, and a faux-advertising video in which actors wear digital Gillian Wearing masks — Wearing dives headlong into self-portrait as conceptual performance, but the sheer number of poses muddy the idea without adding any real substance.

Photographers of the past, like August Sander and Weegee, or like Diane Arbus, had distinct voices because they had particular aesthetic preferences and points of view. You get the sense of who they were as artists from what they chose to shoot, and how they shot it. But they were also genuinely interested in the people they were photographing, and that interest came across. What Wearing does — and it’s both her strength and her weakness — is to use people’s stories, and even her own, as material to illustrate high-concept ideas. What is identity? What is authenticity? What kind of media can you trust? Without answers, these questions are fascinating, and maddening, and eternal.

Through April 4, Guggenheim Museum, 1071 Fifth Avenue, Manhattan; 212 423 3500; guggenheim.org. Timed tickets are required for entry. Visitors over age 12 must show proof of a Covid-19 vaccination to enter the museum, and masks are required.

Cramer’s lightning round: NextEra Energy is a buy