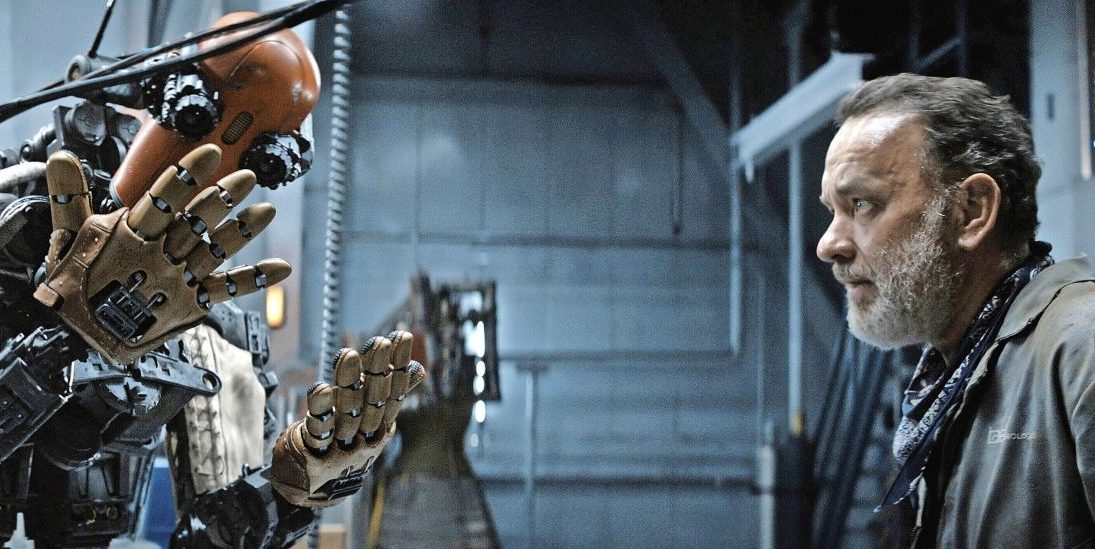 On its surface, Finch is a cute, saccharine, journey epic—an oh-so-predictable father/son discovery saga made only marginally more stirring with its post-apocalyptic landscapes and the fact that the “son” is an android. If it were simply that, however, as Samuel Johnson would say, “it would be worth seeing, but not worth going to see…” Though the latest blockbuster to star Tom “Hankie” Hanks is being predictably fêted by audiences, I was at first puzzled why. Beyond the syrupy getting-to-know-each-other routine and the urge to trick out an RV and stock up on canned food, I wasn’t sure what the movie was trying to impart. Upon reflection, however, I believe the movie works well at two levels: at the superficially emotive level as well as on a deeper, more spiritually symbolic one. It is, I would say, worth going to see…

If you’ve not made the box-office pilgrimage, suffice to say the world as we know it has ended due to ecological collapse. Rest easy, this isn’t another Hollywood “global warming” harangue—this time, the magnetosphere and ozone layer have been shredded by a solar flare, which, in the grand scheme of things, is a more plausible concern. The producers make a subtle nod to this, giving us a glimpse of Al Gore’s laughably irrelevant An Inconvenient Truth in the midst of a cosmic catastrophe outside of our control. The only person in the movie, Finch Weinberg, must hightail it away from a biblically ominous 40-day storm system converging (damn the luck…) on his St. Louis, Missouri laboratory. He’s not, we discover, doing this to save his own irradiated and doomed hide, but that of his wiry rescue mutt “Goodyear.” Adorable. Oh, and he builds an adaptive AI robot that names itself “Jeff” to open cans and throw tennis balls for the hound when he’s gone. Great fodder for Family Movie Night it would seem.

But there’s more to this than meets the eye. The names, for one thing, beg us to pay attention: a great deal of emotional and comedic film-time is devoted to names and naming: Might Finch be an allusion to Darwin’s evolutionary-theory annus mirabilis (Finch’s robot, after all, is an evolving entity). Could the ambiguously Jewish “Weinberg” be a nod to Steven Weinberg, the famously atheistic Nobel physicist (snippets of Don McLean’s American Pie float in and out of the score, asking us repeatedly about our “faith in God above”)? Could “Jeff” be a closeted reference to the tall, red-headed know-it-all of Monticello? Is “Goodyear” an ironic nod to a very bad year, or just a ham-fisted product placement? If these clues are an exercise in esoteric screenplay, it’s going over a lot of our heads, but the movie very definitely radiates a haunting subtlety.

What the movie is clearly not, despite the audience gushing to the contrary, is a simple paean to “Trust” in the Francis Fukuyama vein. While it’s easy (especially with Tom Hanks) to assume a moral lesson about trustworthiness, the movie’s elements clearly contradict this. Finch, for all his on-screen decency, trusts no other human soul—we are told that out east “there are people” who presumably have survived global calamity, but he avoids the prospect with a curt “no thanks.” Robot Jeff’s maturing language algorithm constantly stutters over the word “t-t-trust.” Finch is an avowed loner, mocking collaboration as “wink-wink…teamwork.” And so on.

It’s why, if we watch carefully, Finch bursts into a fit of question-silencing coughing at the conclusion of a “quite hard to follow” parable about trust. The darkest scene in the movie, in fact, is Finch’s frantic escape from humans: a pair of ominous headlights in a cross-country chase scene is as close as we get to a close encounter of the human-kind. How do we know it’s not a needy family seeking help? The movie cleverly forces us to trust Finch, whose crabbed perspective is all we get to see, that the world has turned into a Hobbesian war of all-against-all. But do we really know this? It’s a subtly open question, and to that extent, it is indeed a movie about trust, just not in the superficial way it’s being widely received.

Finch never knew his dad, we find out. Perhaps this is the real thrust of the movie—dystopian action sequences and 150-degree temperatures notwithstanding. Finch lies to Jeff that it’s an “uncle” he received a cherished postcard from—and the rest of the story is about pursuing the worldliness the absent father-figure hints at in the dog-eared card:

Passing through San Francisco next year, maybe we can meat up? I know that I have not been much of a FATHER, but I would vwery much like to meet you and tell you about the world. There is so much to sea.

Spelling wasn’t Finch’s dad’s strong suit, and evidently neither was sticking around, but a worldly perspective seems to have been. This deeper subtext puts Finch’s “trust” issues into high relief: it’s probably why, in the first tottering moments of Jeff’s learning to walk, that he stands passively by while the robot topples backward in helpless disarray. It helps us understand Finch’s climactic showdown with a petulantly adolescent Jeff: “I know you were born yesterday, but it’s time for you to grow up!” It puts Finch’s postcard collection—bridges of the world—into a symbolic light: the father he never knew would, perhaps, have been the link to a socially integrated life. It’s easy to miss, but early in the movie, Finch smiles fondly at an inscription “To my little prince—Mom” in a copy of Saint-Exupéry’s Le Petit Prince. Themes of solitude, rationality, questions, and adulthood support the plot throughout, and the book’s iconic image of a lone figure on a lonely planet could hardly be better tailor-made.

Finch, Jeff, and Goodyear make it out west in their up-armored RV where they stumble into a region where radiation levels are tolerable. If you know your geography, it is the volcanic remnant at Shiprock, New Mexico—another Saint-Exupéry evocation. It is here that Finch knows his end is nigh. Butterflies and a thin green carpet of grass evoke hope in the resiliency of life, even as Finch coughs blood onto the suit he dons—a suit he bought so his father would be “proud of him” if they ever met. His father “had Viking blood” and traveled widely—while Finch always found some pressing reason not to make it far from Missouri. As Finch struggles to his deathbed, happy in the knowledge that Jeff can finally take care of Goodyear, it is the haunting sense of the road-not-taken that pervades the powerful moment. Later, alone and unbidden, Jeff sends Finch to his creator on a Viking funeral pyre…

As a movie, Finch does something to you. It’s not a particularly “feel-good” movie, as my kids rightfully point out. Its overt message about humans being capable of being awful to each other is hard to dismiss, even if we try to peer beyond Finch’s troglodyte standpoint. It leaves us with glaringly open-ended questions: is the abbreviated decalogue Finch programs into Jeff intended to be contradictory? The first directive is never to harm a human being—but the fourth says that looking after the dog Goodyear “supersedes” all other directives. Are we to infer that Jeff’s AI, tainted by Finch’s monomaniacal programming, would justify a Terminator-like spree to “protect” Goodyear from other humans? Early in the movie, when Finch first flips the switch on his lovable android, he mutters that it’s “one small step for man…one giant leap for Finch Weinberg.” Dr. Frankenstein could hardly have said it better.

But these questions are, I think, intentional, and for that, the movie is to be credited. It’s difficult to do things on multiple levels, but Finch does it, and does it well. It subtly pays homage to deeper spiritual motifs of doom, redemption, and hope without beating us about the head and shoulders. It’s action-packed and fun, but with a deeper layer of detail that makes it worth watching more than once. Despite its somewhat contradictory messaging, the one takeaway that seems unequivocal is this: Get out, do something, see the world. Enjoy yourself, for this world can be fleeting. Most important of all, enjoy others.

Go to see this movie—with a loved one.