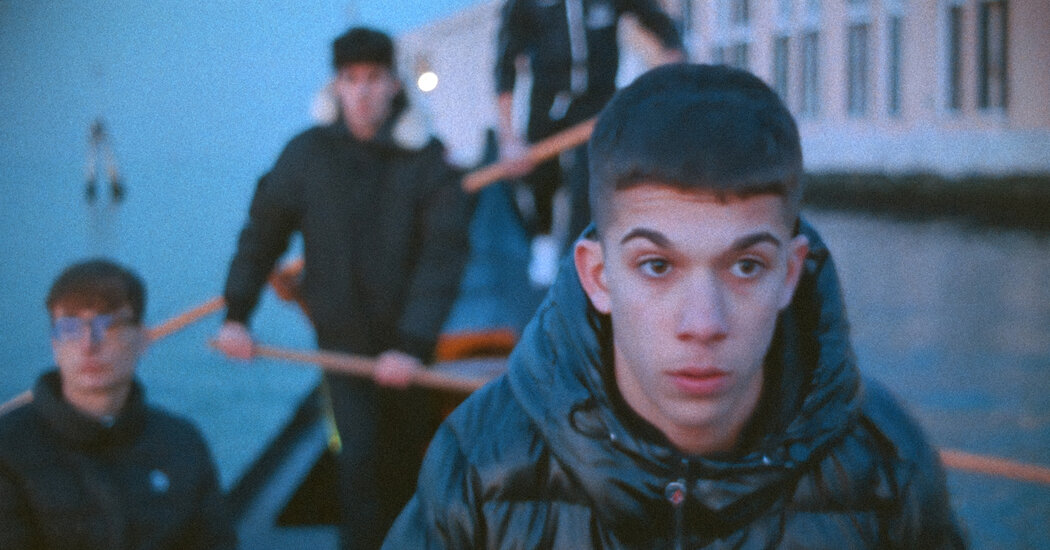 The premise of “Futura” could not be simpler. In late 2019, three filmmakers — Pietro Marcello (“Martin Eden”), Francesco Munzi (“Black Souls”) and Alice Rohrwacher (“Happy as Lazzaro”) — set out to interview groups of high-school- and college-age Italians in various parts of the country.

Their questions, sometimes audible from behind the camera, had mostly to do with the dreams, anxieties and ambitions that are part of the landscape of youth in every place and time. Some of the answers you hear in the finished film are concrete and personal: a career in farming or cosmetology; travel or children. Others are abstract and collective, involving the fate of the nation and the nature of happiness. There are inklings of complex emotion and tremors of political subtext.

Before your eyes, though, the forward-looking intentions of the project, captured in the title, are complicated by present-tense developments. Not long after shooting started — and not far into “Futura” — in the spring of 2020, Covid-19 arrived in Italy, leading to a nationwide lockdown and tens of thousands of deaths. Eventually, the filmmakers were able to resume their work, and for much of the movie the subjects wear masks, gather outdoors and reflect on the catastrophe that has disrupted and rearranged their lives.

“Futura,” then, is a document of the pandemic, a film that will be examined in the future for clues about what’s happening now. But it isn’t exactly a documentary about Covid. Like Michael Apted’s “Up” cycle, which revisited the same handful of British schoolchildren every seven years from 1964 to 2019, “Futura” is attuned to social particulars and open to the universe.

It’s about contemporary Italy, which is also to say that it’s about the divisions of class, region, sex, nationality and ideology that striate the peninsula. A sociologically inclined viewer will gather a lot of information concerning agriculture, vocational education, gender roles, the role of the state and the state of the South. An aficionado of Italian cinema might be reminded of treasured stories of family conflict and adolescent friendship, of farm labor and factory work — of Pasolini, Olmi, Fellini and De Sica. Anyone with a heart will be stirred by the generous, critical, humanist spirit shared by the kids in front of the camera and the grown-ups on the other side.

There is no plot, and the characters aren’t identified by name until the final credits. The pandemic may have prevented some return visits. Early on, I was charmed by a feisty cluster of boxers at a gym in Sardinia — perhaps the only young men in Italy who dislike soccer — and I waited in vain to see them again. On the other hand, checking in with a class of cosmetology students in Calabria and a gaggle of beachgoers in the North was like meeting up with old friends.

Not that the conversations are overly intimate. The young people will sometimes disclose details of their family or personal lives, but most of the questions and answers are pitched in a safe zone of generality. Neither politics nor sex is explicitly discussed, though both subjects hover in the air. At a Genoa school that was the scene of violence during anti-globalization protests in 2001, current students either don’t know much about the incident or don’t want to talk about it, offering diplomatic platitudes about the need for change and the importance of moderation.

It would be a mistake to impose too much coherence on such a kaleidoscopic, open-ended collective portrait. Some youngsters who seem to come from privileged backgrounds — like a trio of equestrians near Turin — express contentment with the status quo. Others, in university settings, speak in the language of theory. You hear a strong desire for change, and also skepticism as to how it will be achieved. Perhaps the most passionate political statement is one young man’s vague but ardent plea for tax reform.

A sense of futility pervades many of the conversations. The idea that the country can’t provide a future for its rising generation is heartbreaking. At the same time, there is something in the solidarity among these young men and women, and in the affection many of them express for their parents, that testifies to the tenacity of Italy’s bedrock institutions and traditions.

And “Futura” is above all an affirmation of the durability of an approach to moviemaking predicated on curiosity, democratic principles and the idea that people can speak for themselves. None of us knows what the future holds, but a film like this is a reminder of why we should care.

Futura
Not rated. In Italian, with subtitles. Running time: 1 hour 45 minutes. In theaters.