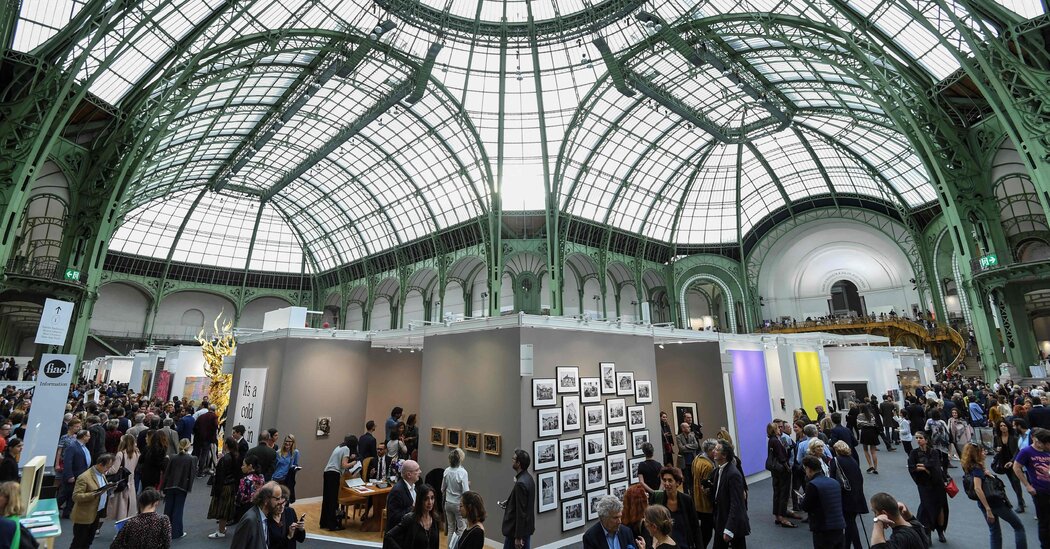 In January, the group that manages the Grand Palais made the shock announcement that the international art fair giant Art Basel, owned by the Swiss-based MCH Group, would replace FIAC in its annual fall slot. FIAC had since 2006 occupied the spectacular cathedral-like exhibition hall for a week each October, but relations had soured between the fair’s owners, the Anglo-Dutch group RELX (which also owns Paris Photo) and the Grand Palais’s management. FIAC moved last year to a temporary site near the Eiffel Tower while the historic Grand Palais is closed for renovation.

Today MCH announced details of the new event. Grand Palais management, keen to protect the distinctive character of the French capital’s art scene, stipulated in its seven-year contract with MCH that the fair should not be branded “Art Basel, Paris.”

In response, the Swiss-based organizers, in collaboration with the French branding firm Yorgo & Co., came up with “Paris+.”

Is that pronounced “Paree ploos,” like in French, or “Paris plus?”

“The official name of the fair is ‘Paree ploos,’ but people will translate it as ‘Paris plus,’” said Marc Spiegler, Art Basel’s global director, in a telephone interview. “We wanted something small and minimal because a big part of what we want to do is work with other entities within the art world and outside,” added Spiegler, echoing previous interviews in which he said MCH wanted to create a dialogue between the fair and other cultural industries in Paris.

Paris+ will launch in the Grand Palais’s temporary site with a roster of about 170 dealers, and remain there until 2023, before moving in 2024 to the Grand Palais itself, with its capacity for more than 200 exhibitors, Spiegler said.

The director of the new event is Clément Delépine, the former co-director of Paris Internationale, a highly regarded fair for emerging gallerists that was held in a different distinctive venue each year during what used to be called “FIAC week.”

“We want to develop its historical continuity and take advantage of the cultural context,” Delépine said in an interview. “We will have a V.I.P. team of more than 30 people from Art Basel,” he added, emphasizing that the organizers of the new fair were committed to maintaining FIAC’s distinctive French flavor. “We’ve agreed from the get-go that 25 to 30 percent of the galleries will remain French,” Delépine said.

In a statement, Art Basel said that three of the seven gallerists on the fair’s selection committee, which chooses new exhibitors and maintains quality control among existing participants, were based in Paris. Jennifer Flay, the long-serving director of FIAC, will join Paris+’s management team as president of the fair’s advisory board in March 2023, the statement added.

“Clement Delépine will bring freshness to the fair, which is welcome,” said Christian Ogier, a Paris-based art adviser and private dealer specializing in the 20th century art for which Paris is famed. He added that fair exhibitors focused on historical pieces shouldn’t be forgotten.

“There are plenty of fairs for up-and-coming artists. If you want heavy-hitting American collectors to fly across the Atlantic, you have to give them something to fly for,” Ogier said. “That’s what Paris is about.”