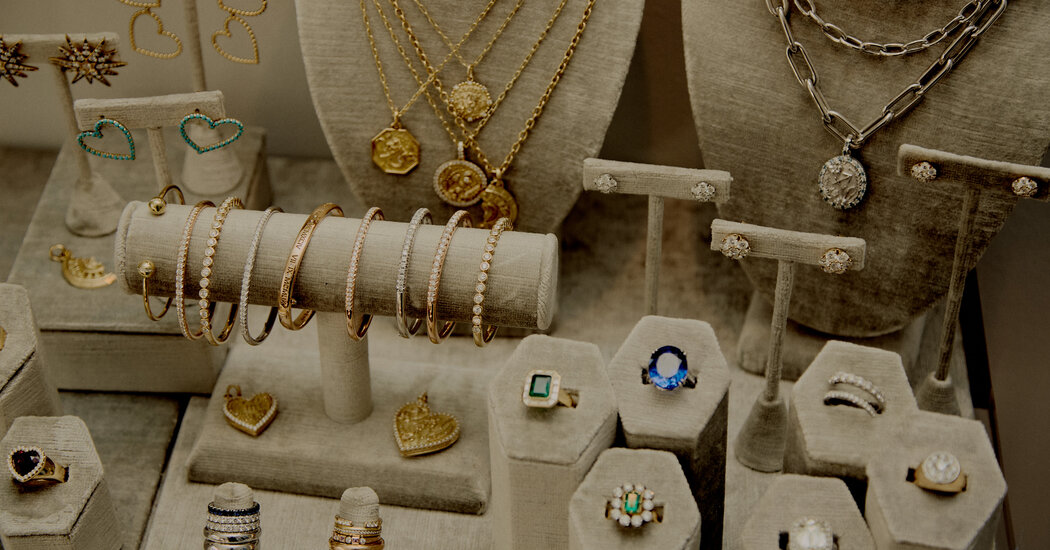 IN BRIONY RAYMOND’S Upper East Side atelier, the décor is as extravagant as the jeweler’s designs: custom Marine Toile-patterned Schumacher drapes flank a large window, there are George III chairs upholstered with pale blue leather and two rows of Baccarat champagne flutes rest on a sterling silver tray. But among those lavish furnishings and her high-end creations — signet rings set with diamonds and lapis; gold lockets embellished with pearls — sits something decidedly less refined: a cluster of tiny plastic bags lined with Bubble Wrap.

Their contents, wax samples of medallions and rings, bits of newly made chains and other assorted unfinished pieces awaiting Raymond’s approval or tweaking, are made about a mile away by artisans working on a few crowded blocks in the stretch of Midtown Manhattan that’s interchangeably known as the jewelry district and the diamond district. These craftspeople — including so-called bench jewelers, who make pieces by hand, typically while sitting at a small bench — fabricate jewelry for multiple brands. Their independently owned workshops are frequently staffed mostly by families, whose members use skills that have been passed down across generations.

On a sunny afternoon a few weeks ago, Raymond stopped by the workshop where most of her pieces are made, as she quite often does. (She chooses, like many of her peers, to keep its name a secret, and that discretion works both ways.) In a low-key office building, in three small, no-frills rooms behind a subtly marked door, a group of nine jewelry makers — three brothers and some of their adult children among them — were hard at work. Their tasks consist of, among other things, executing CAD work, or computer-assisted design that helps create multidimensional models of Raymond’s pieces; bending and shaping thin pieces of gold into bracelets, rings, earrings and necklaces; setting diamonds and other stones into precious metal; and polishing. At one workbench, an artisan flattened small pieces of white gold with a hand-cranked machine that resembles a pasta maker, thinning them down so he could then meticulously twist and stretch them into parts of a chain. “If I don’t have them and I don’t have this level of quality,” says Raymond, 40, “I have nothing.”

Several components of Raymond’s jewelry, such as earring backs and the occasional clasp, aren’t made here, and casting — the process of creating a mold from a jeweler’s design — is handled nearby. But for the most part, this is where the action happens. Two full-time employees of Raymond’s are stationed in a small room nearby to help facilitate communication between the teams. “Is this the most economical way to do things?” asks the designer. “No. Is this the most efficient? Not necessarily.” As a result, many other jewelers produce their creations in China or Thailand, a streamlined and less expensive process. But, Raymond continues, “Is it the only way I could ever possibly do it and put my name on the piece? Yes.”

And she’s not alone. Verdura, started by Duke Fulco di Verdura in the 1930s, with a little financial help from the musician Cole Porter and the real estate tycoon Vincent Astor, friends of the designer’s, makes the bulk of its pieces in New York. Indeed, for many jewelers, the proximity to Midtown’s workshops allows them, as the designer Brent Neale Winston puts it, “to be really in control of what things look like,” while also instilling a buoyant sense of community. Winston’s studio is a short walk from the jewelry district, and she frequently pops in to sit with a stone setter. (She tends to use vividly colored gemstones, like coral and turquoise, in her designs.) “The fact that you can be so hands-on is extremely appealing,” she says.

“For an independent jeweler, especially one who doesn’t have a large team, that’s something of a convenience,” says Bella Neyman, a founder of NYC Jewelry Week. “If you need someone to do the CAD, if you need someone to do the casting, the polishing, the engraving, all of that can be found in one place.” Matthew Harris of Mateo, a line that includes a wide selection of pieces that combine stones such as malachite and turquoise with precisely set diamonds, agrees. “It’s nice to run around the district and go to a diamond dealer, a gemstone dealer, a pearl dealer and a caster,” he says. “It’s time-consuming, but it’s a beautiful process.” Even though Harris now splits his time between Houston and Lisbon, he still employs the same handful of jewelry district dealers and craftspeople he has since starting his company in 2009 and sees them on regular visits to the city.

Some of the bench jewelers with whom Wing Yau, the founder of Wwake, works are closer still: She employs five of them full time at her label’s Greenpoint, Brooklyn, headquarters. Thus many of her pieces, like earrings with lines of delicately strung freshwater pearls that resemble an abacus, are made entirely in house. Some of her less expensive pieces, such as small stud earrings or slender gold rings, get outsourced to Manhattan, mostly with volume in mind. But the more complex designs are always crafted by her Brooklyn staff. “For us, it’s just not worth the risk, because I know my jewelry is hard to make,” she says.

FoundRae’s jewelry, which includes fastidiously detailed pendants and bold rings that offer a luxe take on a cigar band, is similarly crafted by a mix of staff members — two bench jewelers, a polisher and a hand engraver, who work on the lower level of the brand’s TriBeCa boutique — and artisans in Midtown and Brooklyn, with bits and pieces, like clasps and chains, coming from farther afield. A typical piece, says the label’s creative director, Beth Bugdaycay, especially one that necessitates demanding details like champlevé enameling, can pass between six to nine artisans with different types of expertise.

NEW YORK CITY might seem like a surprising place for jewelry making, especially given its prohibitively expensive rents and the creative exodus over the past few years to cities like Austin, Nashville and Miami. Far less clothing is made in the city than once was; the same goes for handbags. It also lacks the worldwide renown or mainstream cachet of, say, Paris. Still, insiders know that it’s one of the world’s jewelry capitals, and one with its own rich history.

At the end of the 18th century, diamond dealers in New York City were centered downtown on Maiden Lane; jewelry makers soon followed, and the industry thrived in this era, when the city was a hub for business owners and their families. “The presence of diamonds in New York is what created the presence of jewelers in New York,” explains Kim Nelson, the assistant chair of jewelry design at the Fashion Institute of Technology. “They’ve always been inextricably connected.” In time, the stone specialists and artisans gradually moved, like the wealthy families, farther uptown.

Tiffany & Co., for example, was founded in 1837 at 259 Broadway, where it remained for 10 years. It’s had craftspeople at its Fifth Avenue flagship since 1940; because the store is being renovated, they’ve temporarily decamped to a large facility not far from Manhattan. In a typical year, though, luxurious one-of-a-kind pieces for what Tiffany calls its Blue Book Collection, which frequently incorporates extra-large diamonds and the designs of the legendary jeweler Jean Schlumberger, are made there. David Webb has made its bold jewelry by hand in New York City since the brand was started in 1948. It was originally based on West 46th Street, near the jewelry district, and popularized by trendsetters, including Diana Vreeland, who often wore a Webb bracelet with hand-set diamonds and rubies. For about a dozen years now, its workshop has been located atop the brand’s Madison Avenue shop. Twenty-three full-time craftspeople, ranging in age from 30 to 77, currently work there. Even Van Cleef & Arpels, a brand so closely associated with Paris, has done some jewelry production in New York since 1939. Raymond worked as a salesperson at the brand’s Fifth Avenue boutique, which first opened in 1942, for nearly a decade before starting her own line in 2015. “Van Cleef was so instrumental in teaching me about all the layers underneath the beautiful objects,” she says.

These heritage brands, then, along with New York’s new wave of jewelry designers, are helping to ensure the survival of a long-established industry. Tastes and expectations have changed — consumers are more conscious of the environmental and ethical impact of their purchases, for example, but that only makes the way these jewelers create their pieces more resonant. “I truly believe in investing in local production,” says Jean Prounis, who grew up in New York, where her line, Prounis, is based. Its offerings, from delicate gold and diamond earrings to bold pendants with green or blush tourmaline, are also mostly made by Manhattan-based jewelers, with some chains put together in nearby Paramus, N.J., and polishing handled in house to achieve the collection’s distinctive patina. “The jewelry district is so historical,” she adds. “And it’s so New York.”