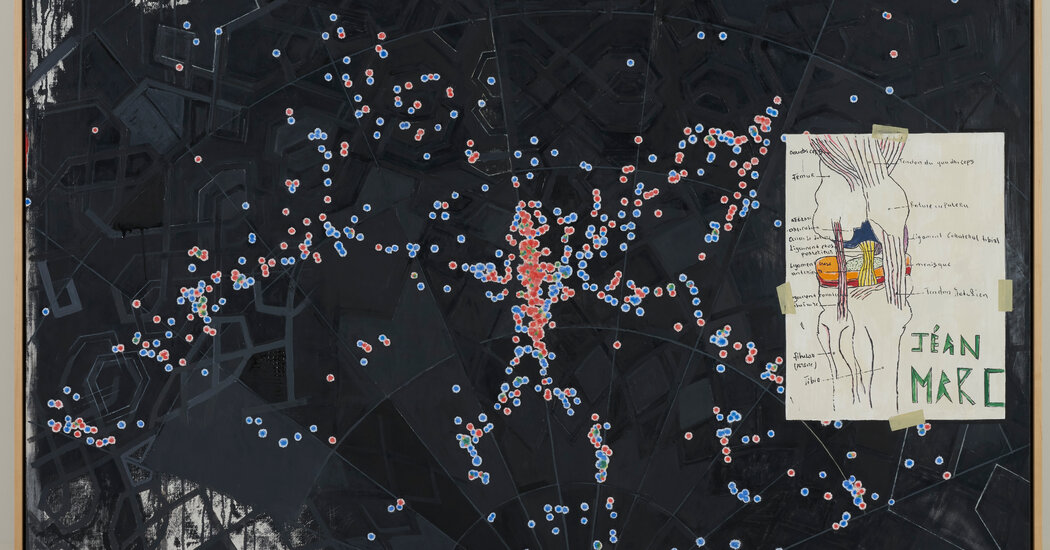 Early in 2020, Dr. Geller received another letter from Johns, one that startled her. “He told me that he was thinking about making a painting, and since he was old he wasn’t sure if he would finish it. And if he finished it, I would be partly responsible for this painting.”

He had always found inspiration in pre-existing images. You can start with his early “Flag” paintings and his debt to the seamstress Betsy Ross. His use of commonplace subjects, as art-history textbooks point out, spawned the Pop Art movement of the ’60s. But unlike the Pop artists, with their Campbell’s soup cans and comic-book women crying on the phone to their boyfriends, Johns is not interested in satirizing consumer culture. He is a more interior and poetic artist who shows how objects can be entrusted to express feelings and ideas, conjuring presences and absences.

“Slice,” in the end, does borrow from Dr. Geller’s map, as viewers can see when the painting makes its debut in the Whitney half of “Mind/Mirror.” There he is: that funny stickman dangling in the sky, his body rendered in red, blue and green dots rimmed in white pigment.

Other elements are no less important. The painting derives much of its power from its tarry, visceral surface. On the left side, black pigment thins and drips, exposing patches of bare canvas as well as a linear pattern (which happens to be based on Leonardo’s drawings of knots). Light fades. Something is vanishing.

The right side, by contrast, is dominated by a hand-drawn illustration of a knee. It is fixed in place with four little pieces of masking tape that look so real you might be tempted to peel them off the canvas, but they’re just a trompe l’oeil illusion. Johns found the original knee drawing, which was done by a high-school student from Cameroon named Jéan Marc Togodgue, in the office of an orthopedist whom the artist sees for his longtime knee problems.

All in all, “Slice” captures the haphazardness of life, with its mix of the achingly personal (a throbbing knee) and the coldly impersonal (the infinite expanse of outer space) and no clear connection between them. The artist seems to be saying that even his paintings are mere objects, as separate and eternally silent as the maps and illustrations and other oddities they depict.