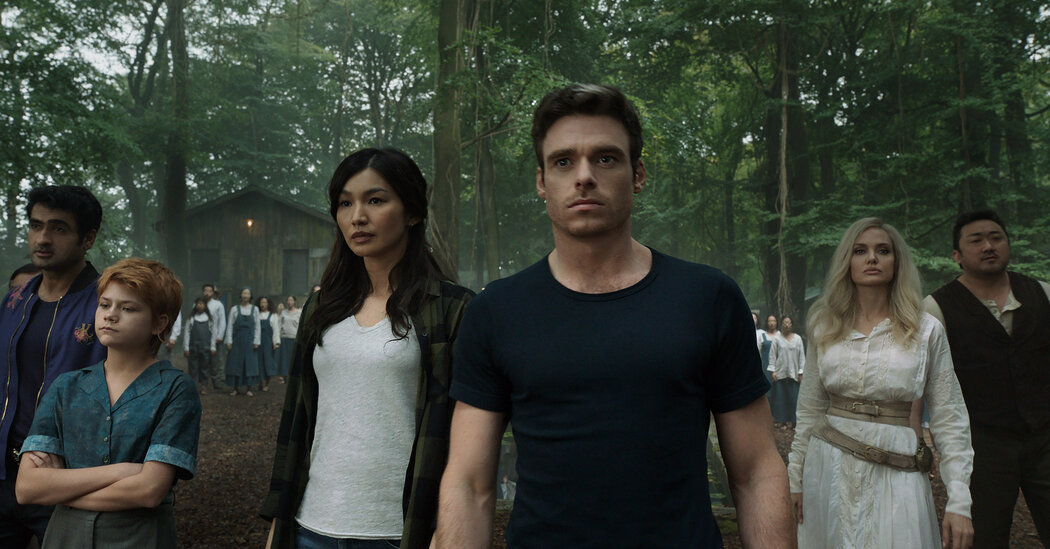 “Eternals,” the latest addition to the Marvel Cinematic Universe, is a two-and-a-half-hour epic that introduces nearly a dozen new characters, hops back and forth through time over thousands of years, and begins with an opening text crawl that reveals a previously unknown origin of the human species. Even the most ardent MCU fan may be perplexed.

For some back story on Marvel’s newest heroes, from their comic origins to their movie powers, here’s a brief guide.

The Eternals comic debuted in 1976 after its writer, Jack Kirby, returned to Marvel following a five-year stint at DC. The comic is widely considered a thematic continuation of a group of stories he had worked on at DC that mixed science fiction and myth and were known as the “Fourth World.” But since Kirby could no longer use the same characters from his time at DC, he created new ones for Marvel.

The Eternals reveals that thousands of years ago, a group of giant extraterrestrials known as the Celestials came to Earth and experimented on apes to create three new species: humans, Eternals and Deviants. The Eternals are an immortal race of beautiful superpowered beings, and the Deviants are ugly, unstable creatures that resent their creators. The series follows the conflicts that arise when the Celestials return to Earth to judge whether their creations are worthy of life. The Eternals was not a particularly successful series at the time, and it was canceled after 19 issues.

Chloé Zhao’s movie (which drops the “The”) makes some key adjustments to Eternals lore: The Celestials are responsible for all intelligent life in the universe, and they created the Deviants to protect humans from predators. The Deviants rebelled, so the Eternals were created to fight the Deviants and help guide humanity in its evolution. Set after the events of “Avengers: Endgame,” the film reveals flashbacks to how the Eternals interacted with humans over the course of history while in the present, they try to stop a cataclysmic event from destroying the Earth.

An idea featured in the original Eternals comic and in the film is that the Eternals are secretly the inspiration for humanity’s greatest myths. Many of the characters have names resembling mythological figures, and in the film, Ikaris (Richard Madden) even says he’s responsible for creating the Icarus story (though he also gets mistaken for another modern mythic figure: Superman).

The Characters and Their Powers

The movie features 10 Eternals, including Ikaris, who can fly and shoot laser beams out of his eyes; Sersi (Gemma Chan), who can transmute matter into other forms; Sprite (Lia McHugh), an eternally adolescent girl who can create illusions; and Thena (Angelina Jolie), a skilled warrior who can conjure weapons out of energy. The leader of the Eternals is Ajak (Salma Hayek), the only one who can communicate with the Celestials. All these characters were introduced in Kirby’s initial run on The Eternals, albeit with some notable differences. Ajak, Sprite and their teammate Makkari (Lauren Ridloff), male characters in the comic, were changed to female for the film. The cast is also more diverse than their characters’ original depictions.

While the Eternals have had a relatively small cultural footprint compared to other Marvel superheroes, they count at least one infamous villain among their ranks: Thanos, who previously menaced the MCU for the last decade, is a mix of Eternal and Deviant in the comics.

Spoiler alert: The remainder of this article includes revelations about characters that appear in the post-credits scenes of “Eternals.” For those who have seen the film and are curious about who these characters are, read on.

“Eternals” briefly introduces two other notable Marvel characters in its post-credits scenes. Eros (Harry Styles) appears aboard the Eternals’ ship at the end of the film, revealing he is Thanos’s brother. Eros is a fellow Eternal who is mostly known for being a womanizing, carefree party boy. In the comics, he teamed up with various heroes to take down his genocidal brother and joined the Avengers for a time, but he tends to be invested in more worldly pleasures.

Additionally, Dane Whitman (Kit Harington), who previously appeared to be Sersi’s non-superpowered boyfriend, is seen opening a box containing a sword at the end of the film. In the comics, Whitman is a scientist who discovers that his uncle Nathan is secretly a medieval-themed villain known as the Black Knight. On his death bed, Nathan asks Whitman to take up the mantle of the Black Knight and use his weapons and research for good rather than evil. Whitman has been a member of the Avengers, and he most commonly wields a magic sword known as the Ebony Blade.