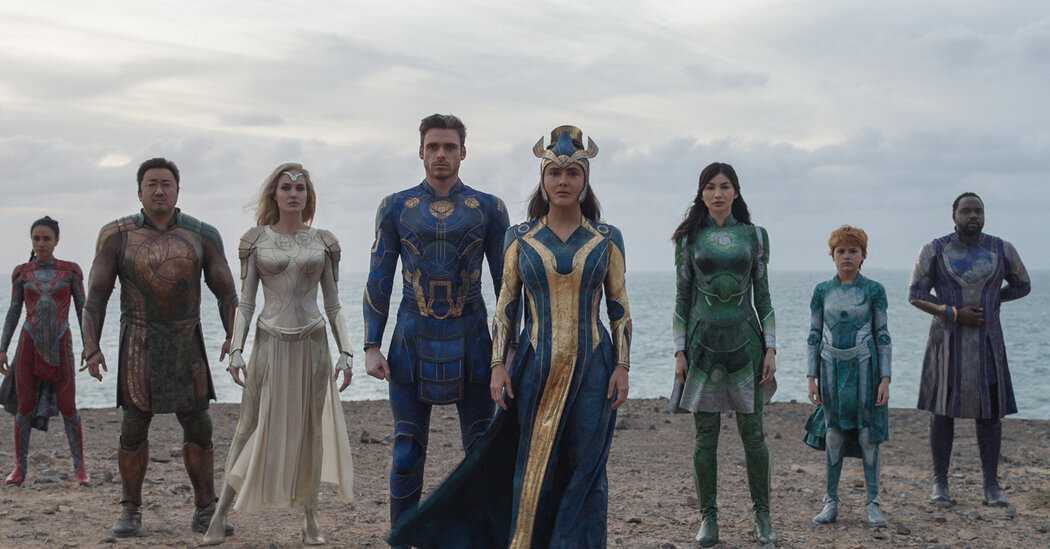 Throughout “Eternals,” the latest — though certainly not the last! — from Marvel Studios, you can see the director Chloé Zhao fighting to cut this industrial-strength spectacle down to human size. Her efforts are mostly evident in the sincerity of the performances, and in the heartfelt moments that punctuate the movie, creating pinpricks of warming light. But it’s a titanic struggle. And as Zhao keeps lubricating the machinery with feeling and tears, her efforts seem to mirror the battle that her likable superheroes are waging against a force seeking to thoroughly control their destinies.

Created by the comic-book seer Jack Kirby, the Eternals first swooped onto the page in 1976 (“When Gods Walk the Earth!”) and have been resurrected a few times since. With Marvel bringing the Avengers movie cycle to a close (for now), it was a given that it would dust off another group of potential super-franchisers. To that end, Marvel brought in Zhao (“Nomadland”) to start the engine with a cast culled from across the entertainment world. Angelina Jolie is here, with sad hair and glamour-puss makeup, and so are Gemma Chan, Salma Hayek, Don Lee, Kumail Nanjiani, an indispensable Brian Tyree Henry and two dewy heartthrobs from HBO’s “Game of Thrones.”

Among Kirby’s lesser-known creations, the Eternals are godlike humanoids primarily borrowed from Greek mythology but with oddball spellings: Thena, Ikaris, Sersi and so on. They have an elaborate history and a charge to safeguard humanity. (To judge from the wretched shape we and the planet are in, they haven’t done a very good job.) As a character explains in the movie, they interfere in human conflicts when need be, a role that evokes that of the United Nations Peacekeepers. But since humanity keeps getting attacked by snarling enemies called Deviants, the Eternals keep stepping into the fray, an interventionist habit that more strongly suggests that of the United States.

Written by Zhao with several others, “Eternals” follows the Marvel house style visually and narratively. It’s busy, borderline clotted, and by turns works as a war movie, a romance, a family comedy and a family drama. It’s best categorized, though, as a getting-the-band-back-together flick: A group of former playmates reunite — warily, eagerly — to make music again or, in this case, kick cosmic butt. Unfortunately, the movie spends an inordinate amount of its two-and-a-half hours revisiting the group’s greatest hits, all while the Eternals explain a lot of stuff. The flashbacks interrupt whatever momentum Zhao builds, while the yammer only further muddies an already convoluted story.