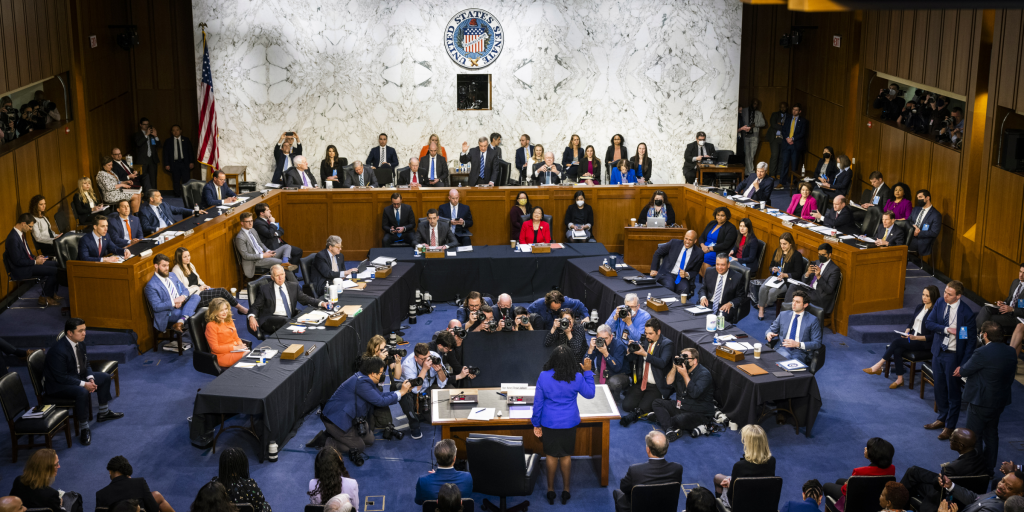 Judicial philosophy is rarely the centerpiece of a Supreme Court confirmation hearing. Politicians always act in the shadow of the next election. Thus, it was not surprising that many Republican senators questioned Judge Ketanji Brown Jackson about her opinions on child pornography and her service on the board of trustees of a school that appears to expose young students to critical race theory. Even if these lines of questions do not do much to illuminate her jurisprudence, the issues of crime and education will influence the coming midterm elections. And at least two of the members of the committee, Senators Ted Cruz and Josh Hawley are widely mentioned as candidates for the 2024 Republican nomination. The hearing provides an excellent opportunity to reach voters.

But that political prism does not differ from most previous televised hearings. When considering Amy Coney Barrett, Democrats harped on health care, even setting up huge pictures of ill people in the committee room, because health care figured in the election a few weeks after the hearing.

Confirmation hearings nevertheless provide a rough but useful measure of where the nation is jurisprudentially. In this case, they have shown that originalism is becoming our law, even if its precise contours are still open to debate.

The Jurisprudential Value of Hearings

When asked about her judicial philosophy, Judge Jackson stated that “The adherence to text is a constraint on my authority. I’m trying to figure out what those words mean, as they were intended by the people who wrote them.”

Hers was a concise statement of originalism. Indeed, these words capture in shorthand form the two requirements with which Professor Larry Solum has defined originalism. The first is the fixation thesis: The meaning of the words is to be determined at the time of enactment. The second is the constraint thesis: A judge is constrained by the meaning of those words.

Now it might be thought that Judge Jackson bobbled her description a bit by confusing public meaning originalism (“adherence to text”) with original intent originalism (“as they were intended by the people who wrote them”). But it is possible to take a charitable reading of that aspect of her answer. As Mike Rappaport and I have argued, it is entirely possible that the intent of the Framers was to follow the rule of interpretation at the time of enactment. And those rules privileged the text over intent. Or as Chief Justice John Marshall said about constitutional interpretation: “the intention of the instrument must prevail and …this intention must be collected from its words.”

At another point in the hearing, Jackson said that the Court itself has “clearly taken the historical perspective, the originalist perspective” in its constitutional analysis. Here she was implicitly embracing the positive law claim for originalism—that we should be originalists because it is the law. That assertion exceeds one that I would make, because the Court has often failed to use originalist methods, making it less clear what constitutional law is, even if originalism remains a contender. But her affirmation is performative. Because she says originalism is the law, it is more likely to be true in the future.

Now it is true that she left herself some outs. She said that sometimes the language of the law is not clear, in which case she might consider other matters. But here too she is following some originalists in suggesting that there may be a “construction zone” where interpretation runs out and jurists must resort to other methods. It is unfortunate that no Republicans tried to pin her down on how often she thought this would be the case and what priority should be given to various methods to fill the construction zone.

Indeed, a key question for legislators should naturally be what gives the Court any authority to invalidate statutes if they do not violate the meaning of the Constitution? In any interstices of an irreducibly ambiguous or vague text, why should the law be determined by using the judiciary’s values or methods as opposed to the legislature’s? It would have been more useful to spend time exploring these questions rather than the questions that many senators did ask. But most senators are inevitably going to focus on what is electorally rather than jurisprudentially salient.

The Importance of Jackson’s Embrace of Originalism

Except in cases where the language is clear and there is no precedent, a future Justice Jackson can wiggle out of much of her commitment to originalism. Nevertheless, her decision to fly the originalist flag is important, contrary to the claims of some.

First, there have been consequential cases in the past where the language is clear, and yet the Court has not followed it. Judge Jackson will be constrained by her remarks in such cases. This point is clear from recent history in debates about the Constitution. For instance, when originalism had largely disappeared from legal discourse in the 1960s, left-liberals argued that the Constitution contained welfare rights.

Second, even if she evades these commitments, her public statement at the hearing contributes to a culture where originalism grows ever more respectable. As a result of its respectability, scholars will write more articles exploring the original meaning of clauses. These will be translated into briefs and oral arguments at the Supreme Court.

The legal jurisprudential culture matters. The reasoning of Roe v. Wade was only possible in a jurisprudential culture that did not put the meaning of the text front and center. Of course, not everyone will agree on what constitutional provisions mean, but a culture of originalism assures that such empirical debates, rather than appeals to values, will settle the law.

Certainly, politicians recognize the power of this culture. That is why in response to Amy Coney Barrett’s nomination, which eventually created a majority of originalists on the Court, senators opposing her nomination took to the floor to denounce originalism. For instance, Senator Ed Markey attacked originalism as “homophobic and sexist.” Senator Patrick Leahy called it a “spurious” philosophy that protected the powerful. Senator Wyden said it was dedicated to taking away “the people’s rights.”

At last week’s hearing, Democratic senators seemed confused about what to do when Judge Jackson suggested originalist commitments. Both Senators Sheldon Whitehouse and Chris Coons argued that one did not need to have a judicial philosophy at all to be a good judge. That is a weak political stance: Just as in academics, it generally takes a theory to beat a theory, so in politics, it takes an articulable position to beat another one.

And today’s progressives, like their predecessors, are right to recognize that originalism is often not congenial to their interests. Social democratic in economics and libertarian in lifestyle rights, they realize that the original Constitution and the Reconstruction Amendments were not enacted at a time when these philosophies had any political purchase. For instance, unlike many modern constitutions, the original meaning of ours does not instantiate a platform of welfare rights. And by decentralizing power and constraining government through the separation of powers, the original Constitution makes national social democracy harder to build out.

Why Originalism Did Not Face Pushback

Given that Democratic politicians sense that originalism is not the best jurisprudence for their agenda, why did their nominee so readily accede to originalist talking points? First, originalism has a common-sense appeal. And the audience for the hearing is not composed of law professors but the American people for whom common sense positions have some resonance. Some Republican senators, like Ted Cruz and Mike Lee, had the ability to make life difficult for a nominee who said otherwise.

Even academics tend toward originalism when they testify before Congress, leaving their more recondite academic theories behind. For instance, during the hearings about whether President Clinton was subject to impeachment for lying and obstruction of justice, even liberal professors who opposed impeachment made wholly originalist arguments against it.

Second, Judge Jackson would not have been an effective messenger for nonoriginalism. She has spent her career as a lawyer and as a judge, not an academic. To change the culture of originalism now becoming dominant, one would have needed more ammunition than her experience had provided. There are only a few possible candidates who would have combined the requisite Supreme Court qualifications with the ability to publicly challenge the ascendency of originalism. The best would have been David Barron, a judge on the First Circuit, and Pam Karlan, a professor at Stanford Law School and currently a high-ranking official at the Department of Justice. But, of course, neither Barron nor Karlan could have been nominated because they did not meet President Biden’s litmus test of being an African American woman. Choosing on the axis of identity limits the left’s ability to pursue other objectives. Here, it cost an opportunity to challenge originalism.

Instead, the jurisprudential significance of the hearings was the deeper entrenchment of an originalist legal culture.