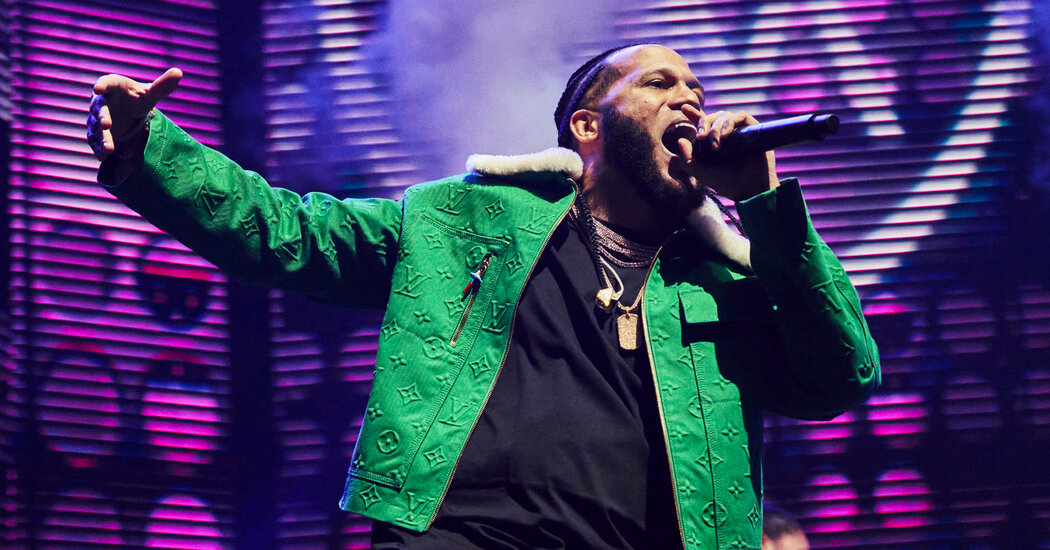 “Who said the Dominican Republic couldn’t go global?” El Alfa announced in Spanish from the stage halfway through his first concert at Madison Square Garden, as red and blue Dominican flags fluttered across the crowd of thousands. The 30-year-old performer, born Emanuel Herrera Batista, had good reason to celebrate: On Friday night, the global ambassador of dembow became the genre’s first artist to sell out the storied venue.

It wasn’t just a personal success, but a watershed moment for the dembow scene he has spearheaded for over a decade — a street sound that contains the spiraling histories of the Caribbean. Dominican dembow is an Afro-diasporic music genre born in the Black and working-class neighborhoods outside of Santo Domingo in the late ’90s and early ’00s, reimagined from Jamaican dancehall riddims (from the Patois for “rhythm”), which form its foundation. But rather than lingering in a slow liquid haze, dembow producers crank the tempo up to lightning speed, stitching and alternating different riddims while rappers deliver breakneck, electric bars. Then, beatmakers chop up and duplicate hooks in the chorus, yielding supreme quotability and catchiness.

Lyrically, dembow is a creative playground where artists are constantly inventing their own slang and vocabularies of becoming. The genre embraces the euphoria of everyday pleasures, like sex, dancing and partying. Unsurprisingly, it is often used as a scapegoat for Dominican social problems, a critique informed by racism and classism. Elites malign dembow as a breeding ground for crime, drugs and “sexual deviance,” characterizing it as pure vulgar expression — like the history of most music genres born out of struggle. The Dominican government regularly censors dembow songs it deems “explicit” and “obscene.” Also like many genres, dembow must contend with its patriarchal past and present, but it’s too simple, too narrow-minded to reduce it to plain raunch or misogyny. Dembow is also a gesture of defiance — a refusal to submit to colonial, “proper” ways of being, speaking and living.

And honestly, it’s also just a lot of fun. El Alfa is a maximally charismatic performer, a comedian whose charm can transcend the stage and saturate an arena. Over the course of the night, he repeatedly demanded audience members scream if they were proud to be Dominican, conducted thousands of concertgoers sitting on different sides of the venue in a competition of volume and jokingly dedicated a song to parents who buy Louis Vuitton and Gucci for their children. When he brought out the merengue icon Fernandito Villalona, who strolled onstage in a shimmering silver jacket encrusted with red and blue rhinestones in the shape of the Dominican flag, El Alfa got on his knees in a gesture of deference and referred to Villalona as his father.

Under El Alfa’s command, the Garden, an already carnivalesque venue, became bacchanalian. At every turn, the artist reveled in excess and humor. He performed his laugh-out-loud summer hit “La Mamá de la Mamá” not once, but twice, a cabal of dancers in matching costumes gyrating behind him. Featured artists El Cherry Scom and CJ joined him onstage, a spectacle that ended in El Alfa climbing a monitor and the lime-haired Cherry taking his pants and shirt off, twerking passionately in his boxers in front of thousands. Before the show’s end, El Alfa claimed that he and his team had been fined for having too much fun and letting the show run over time.

But focus too much on the wisecracking banter or the playful antics onstage, and you’ll miss the artistry. El Alfa has staggering control of his voice. On “Mueve La Cadera,” he sculpted it into percussive babbling; on “Tarzan,” it was ululating yells; on “Suave,” high-pitched baby talk. During his rendition of “Acuetate,” El Alfa had his D.J. cut out the track so he could spit the lyrics a cappella in double-time, effortlessly showing off his dexterity as a rapper. On “Sientate en Ese Deo,” his D.J. slowed the tempo so the lyrics could land with decelerated precision. It was a sublime display of El Alfa’s ability to stretch the boundaries of speech and language. For some, his voice might call to mind the falsettos of the Bee Gees; for others, the yelps of Atlanta rapper Young Thug. But let it be known: This is a distinctly Dominican way of speaking and manipulating language.

Detractors often dismiss dembow for being repetitive, but that critique fails to recognize the creativity embedded in iteration. Repetition is part of why El Alfa can turn anything into a hook, and make listeners cackle in the process; quotable, recurring punch lines are an essential part of his brand. “La Mamá de la Mamá” is a song rooted in double entendre about oral sex, a gag that fully reveals itself once the chorus hits. When El Alfa performed it on Friday, the lyrics flashed onscreen in neon colors: “Dale cuchupla-pla-pla, cuchupla-pla-pla.” To an unsuspecting ear, this sounds like gibberish. I paused briefly and giggled to myself, wondering how I would translate the cleverness of this addictive, onomatopoeic hook into English. I realized it was futile, and that was precisely where the ingenuity bloomed.

While the concert was a display of El Alfa’s agility and showmanship, it will go down as a celebration of a movement. A few minutes into the show, he set the tone for the evening, declaring, “This isn’t my success; it’s my country’s success.” He pointedly shared the spotlight, bringing out a parade of other Dominican artists (the pink-haired Kiko el Crazy, the playboy vocalist Mark B, the tough talking dembowsero Shelow Shaq) and a crew of non-Dominican collaborators who’ve helped him along the way (the Colombian pop star J Balvin, the New York radio personality Alex Sensation, the Puerto Rican reggaeton artist Farruko). Notably, none of the women who have helped push dembow forward were present. But the gesture still felt like a gleeful jab to those who said dembow would never travel beyond the borders of its birthplace.

One of Anthony Bourdain’s favorite countries — he said his first trip there was “life-changing” — Vietnam also represents one of Asia’s best value destinations.