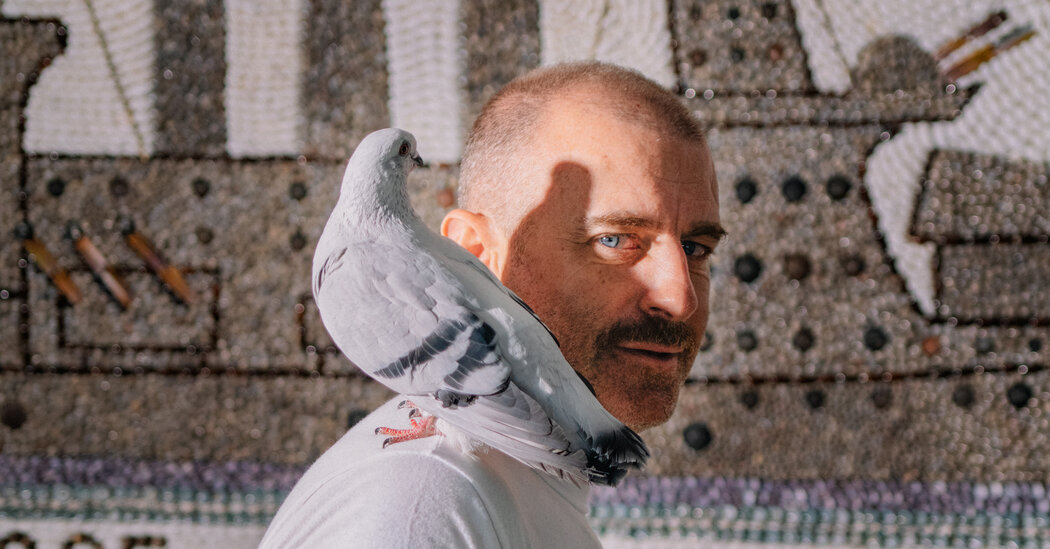 Riley works in many mediums: The Brooklyn exhibition includes films, decorative installations, mosaics and illustrations, like a vast map of Brooklyn’s Gowanus Canal, encompassing its history from precolonial bounty to Dutch settlers through the polluted Superfund site that in 2007 tested positive for gonorrhea. He once took Henry Rollins, the punk eminence, down there, aboard the Turtle, his replica submarine, and spied shrimp through the porthole windows. “That’s how I knew the Canal was getting cleaner,” he said happily.

His mosaics offer one of the biggest wows of the show. Inspired by sailors’ valentines, a nautical souvenir traditionally made of shells, Riley’s are enormous and quite beautiful. Only on close inspection do you notice that the perfect, shiny seashells are interlaid with a rainbow of bottle caps, cigar tips, bits of mechanical pencils, and bread bag clips, all harvested from New York streets and waterfronts.

Though he’s long worked with found objects — he was painting on, and with, garbage in art school — recently, Riley said, “the environmental focus has been more intense,” as he’s watched the shorelines breached by more, and ever tinier, junk.

“As artists, we’re going to have to start thinking differently about the materials that we use,” he said, a few days before the exhibition opened. We were sitting in his studio in the Brooklyn Navy Yard, a pair of female pigeons, Tofu and Asta, rustling in a cage nearby. It’s a cleanish space, stacked with neatly bagged, color-coordinated trash. A trailer outside was filled with more refuse.

Alcohol rehab facilities exist to help people fight addiction. Depending on how long you have been fighting your additions alone, you may want to consider different treatment options and facilities.…