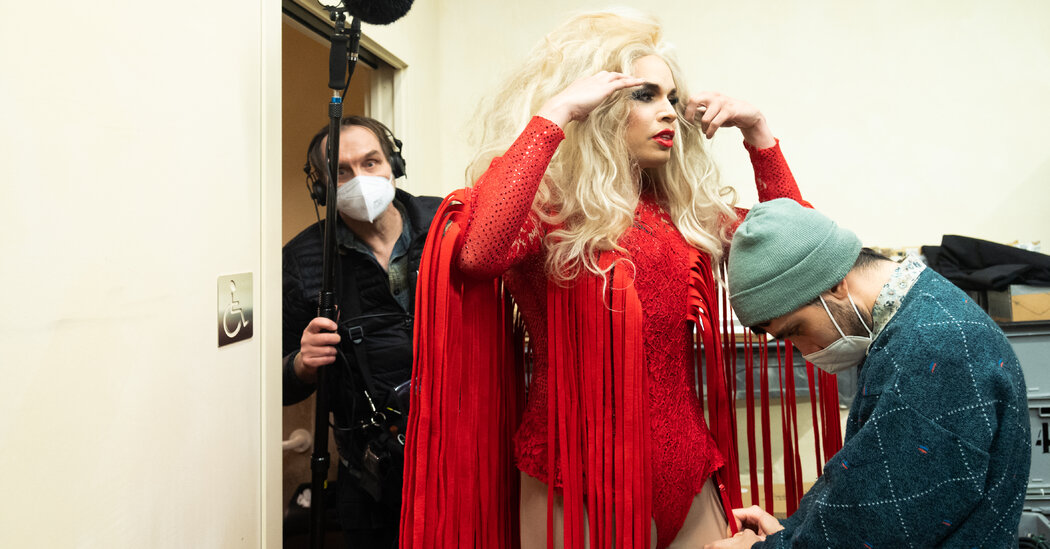 FLORENCE, Italy — Radical queer energy is eternal. For millenniums it has endured suppression, oppression, legal, religious and moral sanction, torture, witch hunts, pogroms, a holocaust, caricature and stereotype and several plagues. Yet it survives and thrives in all its subversive glory, surfacing in the most unlikely of places.

Take, for example, Anna Konda. This character in a leotard, cheap pumps and a tatty blond wig is a persona adopted by Ervin Latimer, a queer designer of mixed race who hails from Finland. Potty-mouthed and as tall as the point guard Mr. Latimer was expected to become, Anna Konda is outlandish in her heart. So much so that she commandeered a spot as special guest designer at Pitti Uomo, the world’s largest fair devoted specifically to men’s wear; rather than exploiting the opportunity to promote Mr. Latimer’s fledgling Latimmier label, his alter ego used it instead to lance masculinity’s big balloon.

Other designers, even other queer designers (Telfar Clemens comes to mind), have lavished the stipends provided by Pitti Uomo to stage spectacles that offered pointed critiques of social norms. Yet to date, Mr. Latimer is the first to have carted to Florence a posse of friends representing many points on the spectrum of gender identification and star them in a fashion show taking its inspiration from vogueing balls.

“It’s about creating a space for yourself,” Mr. Latimer, 33, and the winner of the Finnish Young Designer of the Year award in 2020, said 10 days ago by phone from Helsinki, before packing up his wigs and his tights for the trip to Italy. “The idea that I can make space for my family to be exactly what we want to be is a response to the society we’re a part of and that doesn’t give us room to be. Here, I dictate the rules.”

And here, in a frescoed ballroom of the Palazzo Pucci, just steps from the Duomo, Mr. Latimer staged a Covid-modified version of the elaborate drag throwdowns that first came to public attention that first came to public attention in 1990, when Jennie Livingston’s documentary “Paris Is Burning” began screening at film festivals, and that eventually went mainstream in watered-down fashion with the television melodrama “Pose.” It is difficult now to pinpoint when exactly vogueing became a global phenomenon. Yet it was long after its storied progenitors, people like Paris Dupree, Dorian Corey, Pepper LaBeija and Willi Ninja, went to their graves.

The tragedy is not merely that those people, as well as many other pioneers lost early to AIDS, did not live to see fame and fortune but that death also cheated them of their legacies. It is fair to say that Mr. Ninja could not have imagined a day when a young man of color from Finland would gather around him a diverse group of gay, straight, nonbinary and trans people to reverence and celebrate the unruliness of radical queer identity. Surely, though, Mr. Ninja understood that diversity in its purest sense is, as Mr. Latimer put it, “active, not reactive. It’s not about making the right P.R. move.”

It is about a show of slashed, spliced and supersize suit jackets or trousers with large notches at the shins shown on personages like Caroline Suinner, a Nigerian-Finnish artist who identifies as nonbinary, if at all; or on Jay-Chelle Jimeno, a nonbinary Cuban-Finnish performer; and on Thomas Moose, a transmasculine person who collaborates with Mr. Latimer because “he’s expressing masculinity but not calling it clothes for men or for women, which is important because for a lot of nonbinary people it’s hard to pick one or the other.” It is a show in which the model Marie Grace Iradukunda “can play with masculinity but in a nontoxic way,” as she said.

It is a show emceed by Mr. Latimer, in the guise of Anna Konda, impressively tucked in that red leotard and being filmed in the process by the Finnish director Arto Halonen for a documentary about two Black pro basketball players — Mr. Latimer’s father, Ervin, is one — who shattered color barriers by emigrating to Finland in the 1970s to play for the local leagues. For much of his life, it was expected that the junior Mr. Latimer would follow in his father’s footsteps.

Yet here he was introducing models one by one in categories like “butch realness,” taken directly from American drag balls. It was a modest event, shown before a reduced crowed, in line with health regulations adopted to counter the spread of the Omicron strain of Covid-19. Still, the raucous ballroom spirit remained intact and the music, played by the D.J. Coco Ninja, in a blend of tunes with unprintable titles and MFSB’s 1974 “Love Is the Message,” was as old-school as it gets.

It is true that, by the lacerating standards of legendary D.J.’s like Selvin Mizrahi, Anna Konda’s “reads,” or verbal appraisals, were benign, more cheerleading than murderously fierce. The communalism, however, would have been recognizable to anyone that ever watched two runway contestants battle to the last death drop. And there was ample shade.

“May you all tuck and strut!” Shaban Ramadani, an artist and model from London, told fellow cast members in a backstage ritual before the show began. Then, in line with the canon of radical queerdom, Mr. Ramadani spun the read.