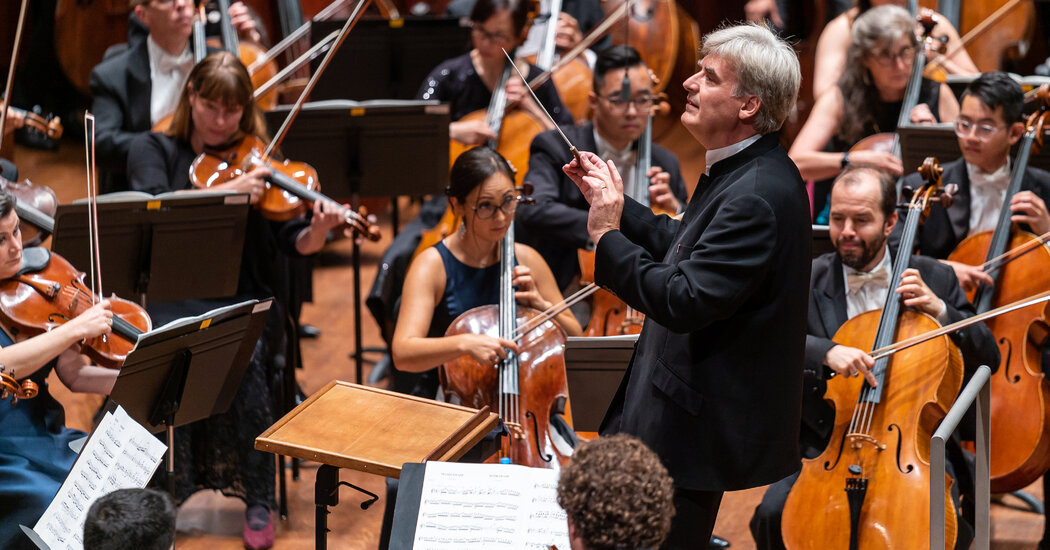 When the Seattle Symphony finally performed before a full audience last month for the first time in a year and half, something was missing: its music director, the Danish conductor Thomas Dausgaard, who could not get a visa to travel to the United States.

The New York Philharmonic had to find a last-minute substitute this week for the esteemed Norwegian pianist Leif Ove Andsnes, who could not get a visa, either. The Metropolitan Opera had to replace two Russian singers in its production of “Boris Godunov.” And the Academy of St. Martin in the Fields, a British chamber orchestra that has been regularly visiting the United States since 1980, had to abandon a 10-city tour.

As the easing of coronavirus restrictions has allowed live performance to return, many cultural organizations are struggling with another problem: their inability to get artists into the United States because of a long backlog of visa applications at American embassies and consulates. The delays have hampered many industries, but they are particularly upending classical music, which relies on stars from all over the world to make a circuit of leading concert halls and opera houses.

Many artists have been caught in the middle, forced to dip into savings to make up for lost concert fees and scrambling to fill their schedules.

“It’s like training for the Olympic Games for four years and then at the last minute learning you cannot compete,” said Arthur Jussen, a Dutch pianist whose engagements with the Boston Symphony Orchestra were canceled this month because of what the orchestra described as “unprecedented delays” in getting his visa, just weeks after a 14-concert tour in China, with his brother Lucas, fell through. “It is a bitter pill to swallow.”

The classical touring industry was one of the first sectors hit by the coronavirus pandemic in early 2020, and now it may be one of the last to recover. Dozens of performances have been canceled in recent weeks in China, Australia, Japan and other countries with sweeping travel restrictions and quarantine rules. The pandemic has served to deepen concerns about the viability of global tours, which have long been considered an essential but expensive part of the classical music ecosystem.

But some of the most acute problems are surfacing in the United States.

While the Biden administration plans to lift a pandemic-era ban on travelers from 33 countries next month — allowing fully vaccinated visitors from the European Union, China, Iran, South Africa, Brazil, India and other countries — the backlog of visa applications remains a problem.

Even in normal times, it can be difficult for visiting artists to obtain the visas they need to perform in the United States. Now they face even longer lines and staff shortages at American embassies and consulates around the world. The earliest available appointments for visa interviews in some cities are for next spring, months after some artists have scheduled performances.

The government has allowed exceptions to the travel ban, which remains in effect until early November, for visitors who can prove their work is essential to the U.S. economy. But consulates have in recent weeks been flooded with such requests, adding to the pileup. And some fear the lifting of the travel ban could yield more visa requests — and more delays.

The State Department, in response to questions about the delays, said the pandemic had resulted in “profound reductions” in its ability to process visas. “As the global situation evolves, the department seeks ways to safely and efficiently process visa applications around the world,” the department said in a statement.

In the United States, the visa woes are injecting uncertainty into a fall season that was already rife with challenges, including tepid ticket sales and the ongoing threat posed by the Delta variant.

Arts groups are calling on the government to fast-track visas.

“The overarching concern is that it would have a chilling effect on international cultural activity and everything it has to offer,” said Heather Noonan, vice president for advocacy at the League of American Orchestras. “When arts organizations can’t rely on the process to work, it makes it very expensive and somewhat risky.”

The problems have dampened some of the reopening festivities. For months the Seattle Symphony had promoted the return of its music director, Mr. Dausgaard, who had been stuck abroad since March 2020, for its opening night gala. But he was forced to cancel at the last minute because of visa issues.

Mr. Dausgaard, who is now on track to get his visa so he can travel next month, said that the restrictions had meant that he and the orchestra had missed opportunities to develop, including by performing new works together.

“It is super painful to see ideas, not least those ideas connected to recordings or touring or something bigger than a single concert, go away,” he said. “The most painful part is the lack of contact with the musicians.”

Even some of the industry’s biggest stars have been affected by the delays, including Lang Lang, the celebrated Chinese pianist, whose visa to enter the United States for concerts last month came through only at the last minute.

In an interview, Mr. Lang said he hoped restrictions around the world would eventually be lifted so that touring could resume in force.

“It is essential to show our audiences that concerts are back,” he said. “The world needs live music.”

Outside the United States, the obstacles for touring artists are also formidable.

China, once a bustling, lucrative market for touring, including for many American orchestras, has also remained closed to most foreigners, including performers.

Wray Armstrong, who runs a music agency in Beijing, said many ensembles cannot afford the time and money spent on quarantines, even if they are able to get visas. “We just have to be patient until the rules change,” he said.

China’s strict quarantine rules, which require isolation of up to three weeks for anyone entering the country, have had the effect of dissuading many Chinese artists from traveling. The composer and conductor Tan Dun has canceled nearly all appearances outside China since the start of the pandemic, delaying the premiere of several works, including “Requiem for Nature,” which he was to conduct in Amsterdam next month.

Travel restrictions have added to pressures on many orchestras, which have traditionally depended on tours for branding and prestige. The pandemic has prompted many to cancel plans to travel overseas or to consider scaling back; some larger orchestras are considering sending smaller ensembles instead.

Zubin Mehta, the renowned conductor, said it was important for American orchestras to maintain robust touring schedules so that they can develop and show off the strength of music in the United States internationally.

“An orchestra always comes back from a major tour a better orchestra,” he said. “A great American orchestra playing in Berlin getting a standing ovation is a reflection on America.”

For artists dealing with delays gaining entry to the United States, the experience has been trying.

Stephen Stirling, principal horn for the Academy of St. Martin in the Fields, said the ensemble’s fall tour would have helped him offset some of the thousands of dollars he has lost in fees when he was unable to perform during the pandemic.

Mr. Stirling said it was jarring to be dealing with travel restrictions at a time when many cultural institutions are reopening across the world.

“Most people’s business is picking up, but we’re still getting cancellations,” he said. “The sooner things can return to normal, the better. We’re desperate to tour again.”