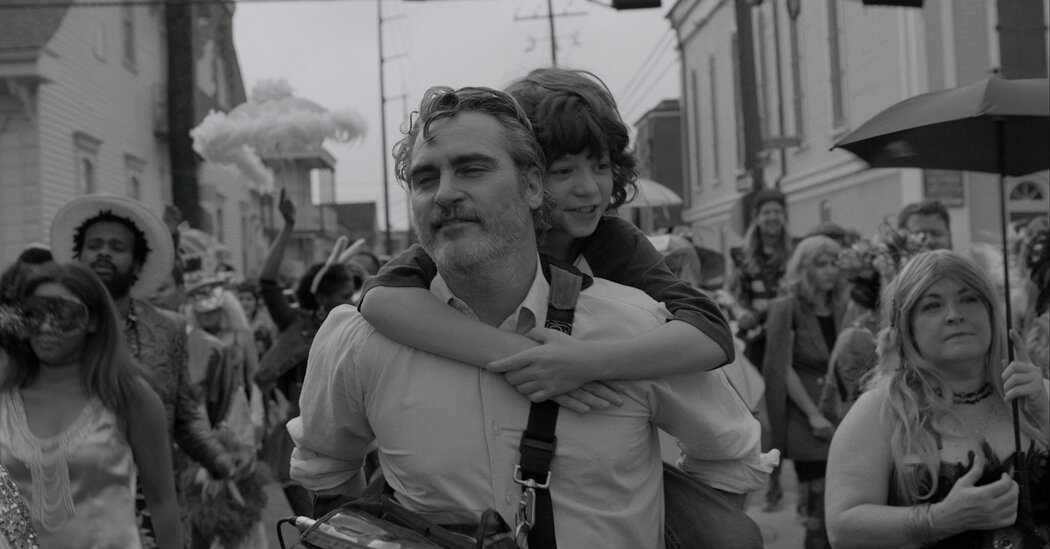 There’s a scene in Mike Mills’s “C’mon C’mon” when a guy talks to his sister about how tough parenting can be. “I have so much sympathy,” he says, with a laugh. It’s a wink-wink moment because everyone knows the challenges. We know them, Mills knows them and so do these characters, who are sensitive and concerned. The brother has been taking care of his sister’s son and is gently mocking himself with his observation — kids are a lot! — though he’s also drawing attention to himself and the work he’s put in.

A story about love and the eternal tug of war between self-interest and caring for others, “C’mon C’mon” is a nice movie about characters who are so nice that I almost feel bad for not being nicely disposed toward them or this movie, even with Joaquin Phoenix as the guy and Gaby Hoffmann as the sister. Their characters, Johnny and Viv, get the story rolling when she says she needs to deal with her husband (Scoot McNairy), who’s suffering a mental-health crisis. Johnny steps in to help with her 9-year-old, Jesse, played by Woody Norman, a charmer who looks a bit like a peewee Mathieu Amalric.

The story tracks what happens when Johnny, who’s single and has no children, steps into the parenting role. Although it’s foreign territory for him, he approaches his new responsibilities with kindness and openness, if rather too much unconvincing, narratively expedient naïveté. Certainly the family’s redrawn geometry proves beneficial for Viv and Johnny, who were estranged and now frequently check in with each other, phoning and texting. Viv misses her son, and is reaching out, but she’s also coaching Johnny, teaching him how to handle Jesse. And, as the siblings talk and talk, their complex past burbles up.

Mills manages the preliminaries seamlessly, creating an instant sense of cohesion and flow: You believe and recognize these people and places. Although he always lavishes conspicuous attention on the visual scheme of his movies — everything is very precise, very arranged — his gift is for the seductive sense of intimacy among characters, which quickly turns actors into people you care about. That’s true even when he’s working with established performers like Christopher Plummer in “Beginners” (an autobiographical movie about Mills’s father) and Annette Bening in “20th Century Women” (about his mother). “C’mon C’mon” was inspired by Mills’s relationship with his child.

Shot in black and white, which gives the visuals a jewel-like shimmer and a patina of misplaced nostalgia, the movie opens with Johnny on the road. He’s in Detroit, gathering material for a radio documentary about children. Now, alone in a hotel room, he speaks into a microphone, cycling through his interview questions. He opens with: “When you think about the future, how do you imagine it will be?” He then turns to nature and cities and families, the scene ending just after he asks: “What makes you happy?” Over the course of the movie, Johnny continues to ask these existentially freighted questions, eventually finding his own answers through his evolving relationship with Jesse.

And so while Viv cares for Paul, Johnny tends to Jesse. Johnny also takes Jesse on the road with him, so he can work on the documentary. There are giggles and laughs, pinpricks of pain and storms of emotion. Over time, as the connection between Johnny and Jesse tightens, their respective wariness gives way to deeper feelings and mutual appreciation. Yet, while the story’s emotional weight is meant to rest in the moments of tenderness between these two, and especially how they effect Johnny — his issues, his growth, his capacity for love — the characters never register as deeply or have the poignancy of the scenes with the nonprofessional children whom Johnny interviews.

Phoenix, bearded and in full shambolic mode (he often looks as if he just woke up), nevertheless makes an appealing center of gravity. That’s useful, because the more Johnny gropes his way through his parenting duties, the more exasperating the character becomes, and the more precious and self-regarding the movie feels. Mills smartly keeps the dramatic incidents in a minor key, and while Johnny and Jesse bond, they also argue over small stuff. Jesse makes sense as a character and periodically acts out — he’s a kid (a person!) and worried about his dad — but Johnny increasingly seems like a storytelling contrivance, as well as a lesson in enlightened gender roles.

At one point, Johnny picks a book up from Viv’s desk. “Motherhood,” he reads in thoughtful voice-over, “is the place in our culture where we lodge or rather bury the reality of our own conflicts, of what it means to be fully human.” As he continues reading, the text shifts to mothers themselves: “Why on earth should it fall to them to paint things bright and innocent and safe?” These are good questions. The answers are also staggeringly obvious, and it’s difficult to know whether Mills thinks these thoughts are revelatory or whether he wants us to think that Johnny — a 21st century, presumably well-educated, ostensibly enlightened bougie, NPR-style journalist — has been living under a rock.

It’s hard not to regret that “C’mon C’mon” isn’t about Viv, a spiky, persuasively honest character who’s actually one of the mothers Johnny reads about. But, much like the children whose words and faces are sprinkled throughout the movie, Viv is mostly on hand to help Johnny on his journey. Unlike her, these kids aren’t fictional, and their inclusion is a terrible miscalculation: “C’mon C’mon” is too slight and too narrow a vessel to bear the intense weight of their reality. These children are tentative, painfully sincere and at times terribly raw. And while their future may not necessarily be bright, unlike Johnny, they manifestly do live in the mind-blowing, heartbreaking great big world.