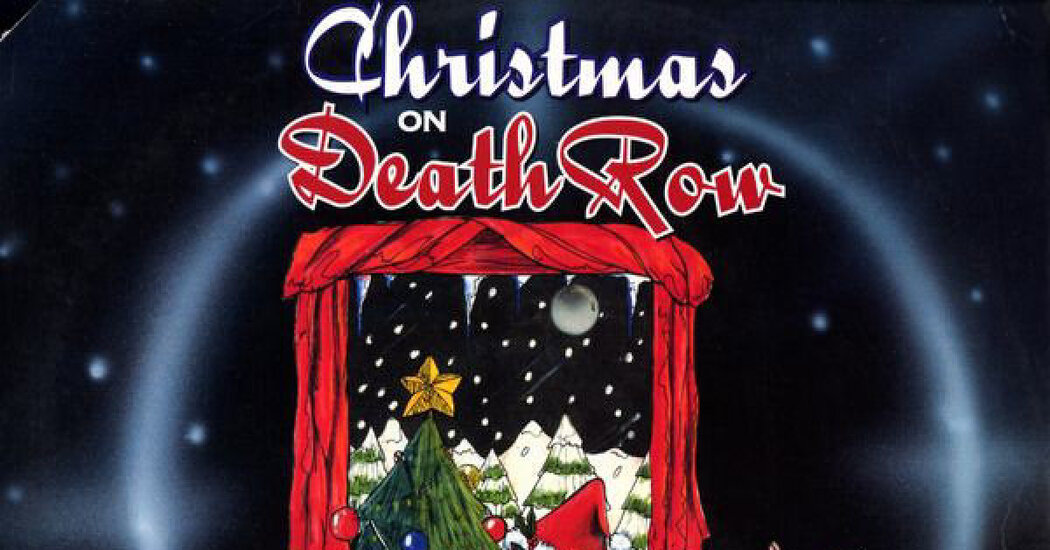 “Christmas on Death Row” broke the streak. Starting with Dr. Dre’s “The Chronic” in 1992, every album released by Death Row Records went at least platinum, but the gangster rap label’s holiday album wasn’t exactly a huge hit. The LP — featuring rap tracks with Snoop Dogg, O.F.T.B. and Tha Dogg Pound surrounded by seasonal favorites performed by the artists who sang the hooks on Death Row’s hip-hop releases — didn’t even go gold when it was released in 1996.

While the LP wasn’t a success, it shouldn’t be reduced to a novelty. “Christmas on Death Row” has more going on than its title suggests — and the story of its creation reveals a lot about a pivotal chapter in the history of one of hip-hop’s most storied labels.

But first: How did this record even get made?

Rap songs about the holidays had come out before. Kurtis Blow’s “Christmas Rappin’” was the first hip-hop record on a major label when Mercury released it in 1979, and the Treacherous Three’s “Xmas Rap,” the Juice Crew’s “Cold Chillin’ Christmas” and Run-DMC’s touchstone “Christmas in Hollis” followed. The full album “A LaFace Family Christmas” arrived in 1993 with Outkast’s first single, “Player’s Ball.” “West Coast Bad Boyz: High fo Xmas,” a compilation from Master P’s label No Limit, came the following year. Death Row, with its mystique built on beefs and gang associations, was different, but a holiday release likely seemed a safe bet.

Daz Dillinger, half of the duo Tha Dogg Pound (with Kurupt), claims credit for the idea. “I saw others were releasing Christmas albums and thought we should too,” he said in an interview.

The singer Daniel Steward, who records as Danny Boy, remembered the Death Row chief executive Suge Knight’s enthusiasm for the idea, and said the two had discussed it more than once “when riding in the car.” Knight is currently in prison and didn’t respond to interview requests.

Tha Dogg Pound cut its track in late 1995, and it set the tone for the album. “I Wish” doesn’t ask for gifts, but circles back again and again to the realization “I wish I had love.”

“The main thing we wished for at Christmas was love, and that’s what we got from our mothers and that’s what we got from our fathers,” Kurupt said in an interview. In his mind, the song and album performed something valuable for a label known for elaborate tales of drugs and violence: “It’s showing people we’re human. We have hearts. We have families. That Christmas album gave us an opportunity to show them a different side to us.”

The idea of having a Christmas song of their creation join those he loved as a child, like the Whispers’ “Happy Holidays to You” and Donny Hathaway’s “This Christmas,” filled Kurupt with pride. “These are classic, classic records that we grew up with,” he said. “I looked at it like, ‘We stars now. We made a Christmas album, cuz.’”

(Snoop Dogg took an alternate route for “Santa Claus Goes Straight to the Ghetto,” in which he counts off a few of the 12 Days of Christmas and how he’ll get intoxicated on each of them.)

Recording continued throughout 1996, even after one of the label’s biggest stars, Tupac Shakur, was shot in Las Vegas in September. Knight booked additional sessions in the Bahamas after Shakur’s death. “Suge wanted to get away,” Danny Boy said.

Kevyn Lewis, the jazz pianist Ramsey Lewis’s son and a producer on the album, pulled together a band and flew to Compass Point Studios to cut additional tracks, including Danny Boy singing versions of Nat King Cole’s “The Christmas Song,” Hathaway’s “This Christmas” and an original tune, “Peaceful Christmas,” which he wrote with Lewis. The song reflected his mood at the time as he sang, “It seems as if it’s the joy that I miss/Santa don’t know me no more.”

“That was really telling the story of what we were going through at that time,” Danny Boy said.

As a whole, the album came together like a hip-hop take on Christmas in Compton — part dark humor, part melodrama — punctuated by traditional songs of the season (“Silver Bells” sung by Michel’le; “Christmas in the Ghetto” performed by O.F.T.B.). Its genre-blending structure, and stretches beyond rap, provide some insight into what Death Row might have been if so much hadn’t changed for the label the year it was released.

Critics often point to the R&B versions of holiday favorites as filler, but those songs reveal a less-heard side of Death Row. Suge Knight famously said that he wanted the label to be the “Motown of the ’90s,” and in 1996, Dr. Dre told Vibe that the label would branch out into rock, reggae and jazz. The soundtrack to the 1994 film “Above the Rim” hinted at a possible different future for Death Row. Warren G and Nate Dogg’s “Regulate” was the breakout single, but R&B acts including SWV, H-Town, Sweet Sable and 2nd II None dominated the album.

“Death Row was very versatile,” John Payne, known as JP, said in an interview. Payne was part of the founding team at Death Row in 1991, and he believes the label became “one-dimensional” by focusing on hip-hop at the expense of the other talent it signed. “There was a whole lot going on that people never realized,” he said. “Look at what’s in the vault. There’s gospel, there’s R&B, there’s all kinds of stuff.”

When “Christmas on Death Row” arrived on Dec. 3, the label was in chaos. There were only three weeks for the album to sell before the holiday, and the label’s team, mourning Shakur, was in no position to promote it.

“We were distraught,” Kurupt said. “Everybody was angry and hurt.”

With Knight incarcerated, the label’s head of security, Reggie Wright Jr., took over operations, despite having little business experience. While Knight kept a sparse release schedule, Wright put out three albums in November 1996 alone: “The Don Killuminati: The 7 Day Theory” by Makaveli (better known as Shakur), Snoop Doggy Dogg’s “The Doggfather” and “Death Row Greatest Hits.” When “Christmas on Death Row” came out a week later, it had to compete with the label’s biggest artists for fans’ dollars.

Bill Adler, a former Def Jam executive and hip-hop author and archivist, said business considerations weren’t the only reason the album failed to connect. “This album was not produced by Dr. Dre, and that makes all the difference,” he said. Without the producer’s signature G-funk, it didn’t sound like Death Row.

The writer Dan Charnas, author of “The Big Payback: The History of the Business of Hip-Hop,” agreed that the loss of Dr. Dre was a devastating setback for the label because his musical credibility and hit-making acumen provided a balance for Knight. “He was an entertainment executive who liked to look hard and play hard,” Charnas said of Knight. “Looking tough and looking scary was a huge part of Death Row’s mystique. That way of doing business tends to implode upon itself eventually.”

In many ways, the arrival of “Christmas on Death Row” coincided with the beginning of the label’s final chapters.

Death Row didn’t end in 1996; it limped on until 2006, when it and Knight filed for bankruptcy. After that, rights to the label and its catalog passed through a number of corporate hands to the label group MNRK, which is now celebrating Death Row’s 30th anniversary, focusing on digital spaces that didn’t exist during the label’s heyday.

The Death Row Instagram account invites visitors to tell the stories of when they first heard key songs or share the tracks they would use to start themed playlists. It also posts vintage photos of Shakur, Snoop and Death Row’s most charismatic stars. Absent from the feed are photos of Knight, who gave Death Row its “unstoppable, undefeatable, diabolical mystique,” Charnas said. (In 2018, Knight pleaded guilty to involuntary manslaughter, for a 2015 hit-and-run after a dispute related to the film “Straight Outta Compton,” and was sentenced to 28 years.)

That’s the tension that “Christmas on Death Row” struggled to overcome then, and it makes the album fascinating now. “This really, really scary outfit applied itself to this pop culture phenomenon, Christmas music, which is incredible,” Charnas said. “It’s a Christmas miracle!”