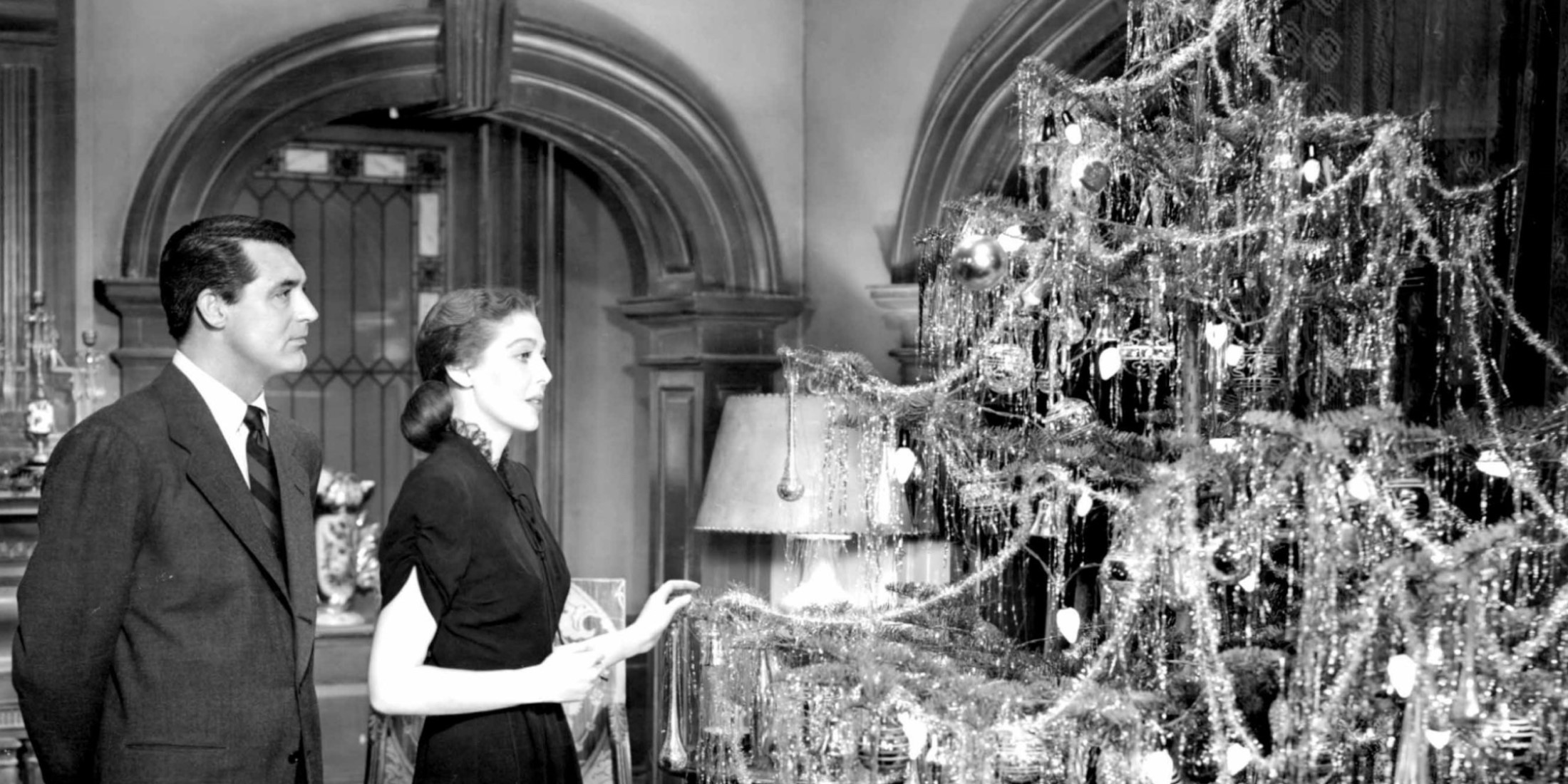 It may seem highly unusual that the suave and gorgeous Cary Grant could play an angel who helps a bishop and his wife find Christmas joy once again, but that is his role in Henry Koster’s 1948 film, The Bishop’s Wife. It is a unique Christmas film, and although it didn’t do as well as expected at the box office, it ended up becoming one of those classics that is a necessary viewing (much like Frank Capra’s 1946 film, It’s a Wonderful Life) during the Christmas season.

The story involves a spiritually troubled bishop, Henry Brougham (David Niven), who is obsessed with building a great cathedral that will reflect the glory of God. But he is running into financial troubles. One of the biggest benefactors, Mrs. Hamilton, is willing to help but only if the cathedral will be built according to her own tastes—and that means creating a shrine to her late husband. Henry is conflicted but is willing to give in. This resolution, however, brings only more tension between him and his wife, Julia.

Julia is a caring wife, who truly loves her husband. She only wants what’s best for him, and begs him to start enjoying life once again. Henry has become so involved in his administrative duties and especially the cathedral project that he cannot see the value of joy and relaxation. It’s clear that Julia has tried everything and is willing to give up. In a moment of pure spiritual exhaustion, Henry prays to God for guidance. Like most people who pray in moments of desperation, Henry has a particular idea of what he wants, namely to successfully build the cathedral. His prayer is answered though not in a way that he expects. An angel appears in his study, but this is not what we would consider an ordinary angel.

Cary Grant plays Dudley, who is at once debonair yet innocent, seeing life through a child’s eyes. This combination might seem strange, but Grant pulls it off, mainly because of his usual charm and the ease that he always brought to his roles. Grant is also a great comedic actor. The short quips and expressive eyes only further contribute to the vision of this unusual angel. Originally, Grant was supposed to take the role of the bishop but the director convinced him that he would be far better as Dudley. And he was right.

As the film unfolds, Dudley enters the bishop’s residence and says that he will work as an assistant. The only person who knows that he is an angel is Henry but he oscillates between belief and disbelief, and grows more and more frustrated with him as time goes on. Everyone loves Dudley, and they enjoy his company—everyone except for Henry, who is convinced that Dudley is trying to take Julia away. This doesn’t seem so far-fetched, and it is Henry’s suspicion, coupled with Julia’s obliviousness to Dudley’s intentions, that keep the audience guessing as to how exactly this romance will end.

Dudley does everything a suitor would do. He takes Julia to her and Henry’s favorite restaurant, Michel’s (a place they haven’t been in for years); they go ice-skating; they take Julia and Henry’s daughter out for some snow fun; they visit Julia and Henry’s old friend, Professor Wutheridge (Monty Woolley); they visit the church in which they listen to the boys’ choir sing a beautiful rendition of Charles Gounod’s composition, “O Sing to God”; and Dudley does some angel magic in order for Julia to buy a hat that she has been admiring in the shop window for quite some time.

Of course, these are all things that Henry should be doing with his family. At times, he is forgetful of it all, but another time, bad luck (or is it Dudley?) intervenes when Henry gets literally stuck on a chair at Mrs. Hamilton’s house. This prevents him from going to the church where they were all supposed to meet. Dudley’s sense of morality and goodness—something every angel is supposed to be equipped with—begins to falter. He finds himself falling in love with Julia, and longs for an earthly life. He wants to feel, touch, and taste. But he knows that he is committing a grave mistake, that it is a “bad sign.” Instead of bringing harmony, Dudley has brought discord (fear not, dear reader, things do work out eventually!).

The production was not without its difficulties. Some were superficial, while others grave. According to Scott Eyman’s Cary Grant: A Brilliant Disguise, “the film felt top-heavy to Grant, and he was clearly not enjoying himself.… As always, Grant worked very hard on the set to make scenes work, although he never got over being rankled about switching parts [with David Niven].” In addition, Loretta Young was simply difficult to get along with, and “was upset by Goldwyn’s insistence on a de-glamourized appearance.”

The most difficult and sorrowful time during the film was endured by David Niven. As Eyman writes, “he [Niven] was still struggling with the tragic death of his wife Primmie. In May 1946 she had fallen down the basement steps at Tyrone Power’s house while playing a party game called Sardines. She tumbled twenty feet headfirst onto a stone floor, and died several days later…. She left two small boys and a grief-stricken husband who spent the rest of his life cheated out of the love of his life.”

Yet Niven (in his usual funny and relatable fashion) breathes depth and nuance into the role of Henry Brougham. Even in his spiritual alienation as a bishop, Niven’s Henry is seeking harmony and goodness. He is a good man, despite his wrestling with faith. As Grant said of his friend, “He [Niven] was still distraught about that [Primmie’s death] when we were making The Bishop’s Wife, and yet there was also still that urge to entertain, to tell stories, not always true stories maybe but marvelous rearrangements of the truth. He was a funny man and a brave man and a good man, and there were never too many of those around here.”

Although the title implies that at the center of the story is Julia because Henry and Dudley are fighting for her, the primary theme of The Bishop’s Wife is longing. Perhaps it is a perpetual and inevitable part of being human, no matter who we are, where we come from, and what our purpose in life may be. Everyone in the film, including Dudley who is not supposed to have any human emotion, longs for something better. This is not without justification.

Julia misses Henry’s joy and humor that made him who he is. Henry appears to be oblivious to what he longs for but he knows that he is not in the right frame of mind or heart for that matter. The professor has been planning to write that great history book, but it’s been decades in planning and he hasn’t written one word. And as it turns out, Dudley becomes aware of his own longing for earthly, enfleshed life.

At the end of the film, Henry delivers a Christmas sermon, which was written by Dudley. Of course, at this point, Henry has no memory of Dudley although he finds it odd that he is reading a sermon that seems wholly alien to him, as if he is reading these words for the first time (which he is). Yet, as he continues to read, he becomes firm in the holy words that are on the page. Nervously, Henry begins: “Tonight I want to tell you the story of an empty stocking. Once upon a midnight clear, there was a child’s cry, a blazing star hung over a stable, and wise men came with birthday gifts.”

But as he continues to read, he begins to gain confidence and faith, not in himself but in God. “We haven’t forgotten that night down the centuries,” he continues.

We celebrate it with stars on Christmas trees, with the sound of bells, and with gifts. But especially with gifts. You give me a book, I give you a tie. Aunt Martha has always wanted an orange squeezer and Uncle Henry can do with a new pipe. For we forget nobody, adult or child. All the stockings are filled, all that is, except one. And we have even forgotten to hang it up. The stocking for the child born in a manger. It’s his birthday we’re celebrating. Don’t let us ever forget that. Let us ask ourselves what He would wish for most. And then, let each put in his share, loving kindness, warm hearts, and a stretched out hand of tolerance. All the shining gifts that make peace on earth.

Everyone in the film is ultimately seeking God, without even truly knowing it, and they are making a mistake of not putting God at the center of their lives. Only then can creativity and joy emerge. But their inspiration cannot remain static or, shall we say, “angelic.” It has to translate into action and human relationality. Henry was so set on building a sacred space of a cathedral that he didn’t think about the sacred and earthly spaces of one’s heart. “You have made us for yourself, O Lord, and our hearts are restless until they rest in you,” wrote Augustine in his Confessions. Our human finitude doesn’t allow for a complete knowledge of the future, or even our own hearts. Henry wasn’t truly aware of what he needed in that moment of desperation and spiritual fatigue, but he ended up being “surprised by joy,” to use C. S. Lewis’s phrase. Henry’s faith has been restored.

Executive Director of the WHO Emergencies Program Mike Ryan speaks at a news conference in Geneva, Switzerland on Feb. 6, 2020. Denis Balibouse | Reuters Covid-19 will never be eradicated,…