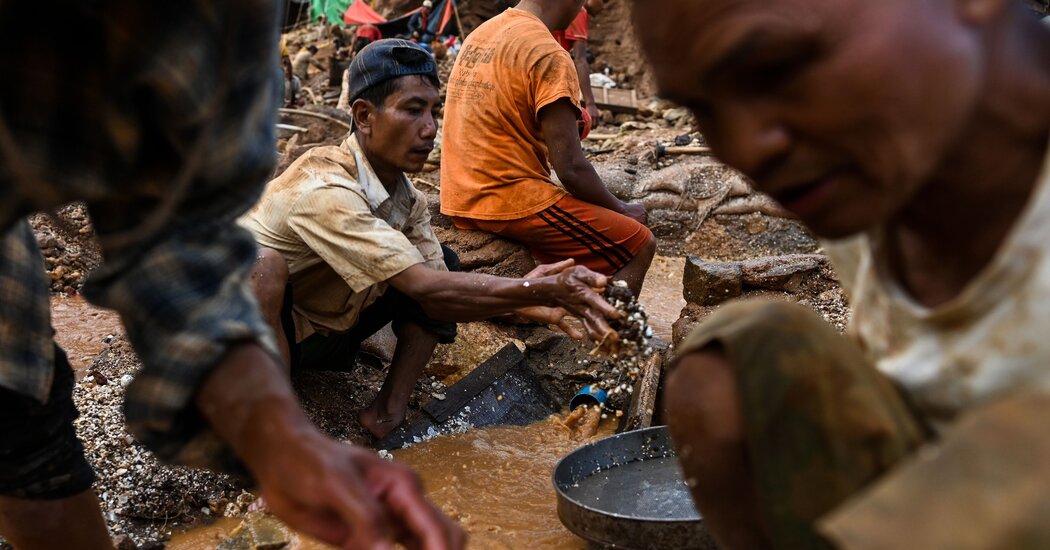 Myanmar, formerly known as Burma, has long been a producer of some of the world’s priciest gemstones: pigeon’s blood rubies. Known by their deep, natural red fluorescence with blue hues, they command higher prices per carat than any precious stone on the global market, with the exception of colored diamonds.

But political conflict and trade embargoes have made rubies from Myanmar highly controversial for more than a decade, creating complicated sourcing problems for jewelers. Many now buy gems mined in neighboring countries or in Mozambique — and routinely require dealers to provide detailed documentation that gems did not originate in Myanmar.

“Today, the mines of Myanmar are no longer producing large or gem-quality stones, but demand is high and supply very limited,” said Vincent Pardieu, a world-renowned field gemologist, explaining that the government suspended mining licenses in 2016. “Today, 99 percent of Burmese rubies found on the market were extracted decades, even centuries ago.”

Rubies, along with jade, blue sapphires, spinels, peridots, aquamarines and a large variety of other gemstones, are found in a rich geological arc straddled by Myanmar, Thailand, India, Pakistan and Nepal. But as mining has been relatively uncontrolled for generations, the yield of gem-quality rubies in the region has significantly decreased.

“To find quality rubies in Myanmar now, you would have to mine in depths of over 600 meters, which is too difficult to be profitable,” Mr. Pardieu said, referring to a depth of around 1,970 feet.

Along with their rarity, “Burmese rubies have a special historical appeal, like sapphires from Kashmir or emeralds from Colombia,” said Laurent Decque, director of Imagem, a gemstone dealer in Paris. “There is a lot of myth around their origin, which makes them more desirable, even though Mozambique rubies are arguably more beautiful.”

Yet the Mozambican deposits were not discovered until the mid- to late-2000s. “If you looked at gemology books predating 2014,” Mr. Pardieu said, “you would find no history on ruby mining in Mozambique. Elizabeth Taylor or British royalty never wore Mozambique rubies, so there is no glamour associated with them.”

And that lack of allure is reflected in prices. François Garaude, a gemstone dealer in Paris, said, “An extraordinary Burmese ruby of 10 carats or more can cost anywhere from five to 10 million euros per carat today,” or the equivalent of $5.7 million to $11.4 million.

“A comparable ruby from Mozambique trades for 10 times less,” he said.

“Sourcing good rubies has always been a challenge,” François Graff, chief executive of Graff, wrote in an email.

“Very rare and difficult to procure, Burmese rubies are mainly found in estate pieces,” he said. “It is not unusual for us to buy and sell the same rubies many times over.”

In 2006, Mr. Graff’s London-based company paid $3.6 million for an 8.62-carat pigeon’s blood Burmese ruby and sold it to a client. In 2014, when the same stone returned to auction, Graff paid $8.6 million for it, more than double the original amount.

Some jewelers, however, choose not to deal in Burmese rubies to avoid business connections with a country where the army, known as the Tatmadaw, has repressed citizens, particularly ethnic minorities, since independence in 1948.

In April, for example, the U.S. Treasury Department placed several entities related to Myanmar’s mining ministry on a “Specially Designated National” list, barring U.S. companies from trading with them.

And between 2008 and 2016, a law banned rubies from Myanmar from entering the United States.

“These measures are ineffective because there are always intermediaries,” Mr. Garaude said. “Also, the biggest market for Burmese rubies is China, and they have no problem with Myanmar.”

Still, with consumers increasingly demanding transparency about the provenance and supply chains of the products they buy, geographic origin has become a central issue for some jewelers.

“Cartier will not buy or sell rubies from Burma for ethical reasons,” said Jacqueline Karachi-Langane, creative director for Cartier’s Prestige division. “We are now looking at new sources like Mozambique, which has exceptional rubies with a purer crystal and fewer inclusions than in Burmese rubies.”

Cartier’s Phaan ring, a highlight of the jeweler’s Sixth Sense high jewelry collection presented in June, featured an 8.20-carat ruby from Thailand set atop a 4.01-carat white diamond in a stacked construction designed to intensify the ruby’s color.

“There are very few rubies from Thailand on the market today, but this one had a rare color density, very close to Burmese, and an interesting violet streak,” Ms. Karachi-Langane said.

Cartier, part of the Richemont group that includes Van Cleef & Arpels and Piaget, is a member of the Responsible Jewellery Council, which sets transparency standards for the supply chains that serve the jewelry and watch industries.

Understanding the Chaos in Myanmar

The coup was preceded by a contested election. In the Nov. 8 election, Ms. Aung San Suu Kyi’s party won 83 percent of the body’s available seats. The military, whose proxy party suffered a crushing defeat, refused to accept the results of the vote.

Ms. Aung San Suu Kyi could face time in prison. She was detained by the junta and secretly put on trial. If convicted of all 11 charges against her, which include “inciting public unrest,” she could be sentenced to a maximum of 102 years in prison.

It also is part of the Colored Gemstones Working Group, an alliance created by Chopard, Gemfields, the Kering and LVMH groups, the Muzo Companies, Swarovski and others, to ensure responsible sourcing of raw materials for the jewelry industry.

To trace the origin of the stones it buys, Cartier — like many of the jewelers headquartered on Paris’s Place Vendôme, the global center of haute joaillerie — requires several reports from reliable gemology laboratories.

“For stones valued over $500,000, the jewelry maisons require two lab reports from their choice of three trusted labs,” said Mr. Decque of Imagem. “If a lab makes mistakes or produces a fake report, it is quickly discredited. As dealers, we cannot risk losing a client by supplying unreliable reports.”

Testing at the French Gemmological Laboratory in Paris, for example, is conducted without information about a gem’s owner or the stone’s mining history.

“We issue an analysis report,” said Aurélien Delaunay, the laboratory’s director, “based on extensive testing using state-of-the-art equipment to identify the nature of the stone, any treatment to enhance its color, and its geographic origin.”

Still, without a direct and trusted chain of custody from the mine to the testing lab, determining a gemstone’s origin is a judgment call. “Only the miner and God know for certain where a stone was extracted,” Mr. Pardieu said.

Stefanos Karampelas, the French lab’s chief gemologist, said: “Origin is a matter of opinion based on our judgment and experience. We come as close to the truth as possible.”

“The difficulty is that frontiers are porous when it comes to gemstones,” Dr. Karampelas said. “If there is an issue with one country, a stone may be labeled from its neighboring country. This happens with rubies, or with emeralds from Afghanistan, if the market has a problem with the Taliban.”

Because there are no laws or regulations requiring a ruby transaction to include a lab report, it is up to a buyer to inquire about the stone’s origin.

“We are not the gem police,” Mr. Delaunay said. “Our reports are fully transparent so clients know what they are paying for.”