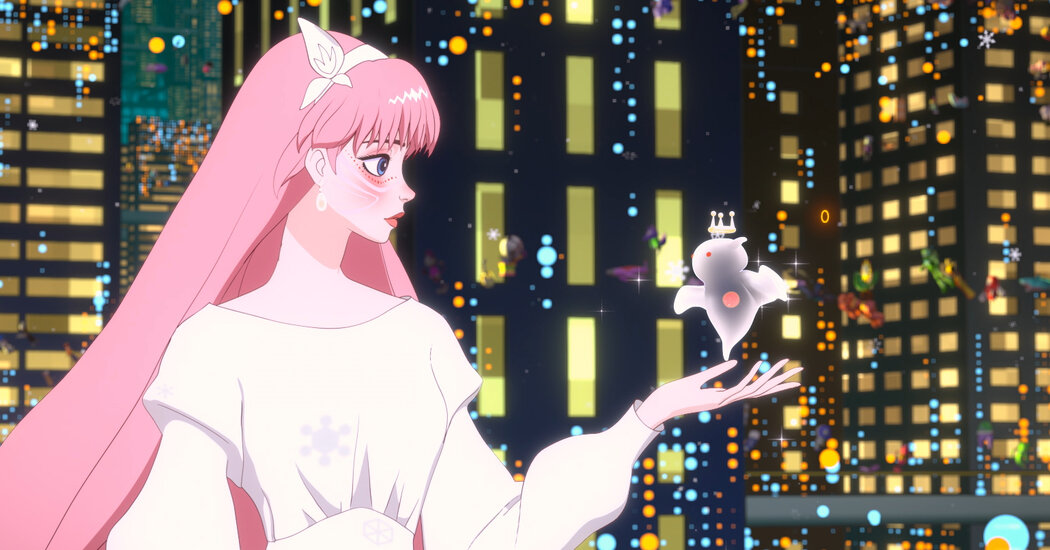 Colors and hearts explode in “Belle,” and your head might too while watching this gorgeous anime. Set in the undefined future, it envisions a reality that resembles our own, with the same drab institutions and obligations, the same confusing relationships and feelings. Suzu (voiced and sung by Kaho Nakamura), a melancholic high school student, lives with her father (Koji Yakusho) and still mourns her long-dead mother. Suzu exists in a miasma of grief, one she fleetingly escapes by entering a computer simulation.

Described as “the ultimate virtual community” and cleverly named U, this other-world is an entertainment but also a refuge. A dazzling phantasmagoria, it allows customers to log out of their reality by slipping into an avatar in the U space. Once inside, users — their real selves obscured by eccentric, sometimes aspirational cartoonish identities — have seemingly unfettered freedom. They can cut loose, bop around like tourists, become someone else or maybe find themselves. “You can’t start over in reality,” Suzu hears when she first fires up the program, “but you can start over in U.” The catch? Everyone is still on social media.

Journeys of self-discovery dominate much of contemporary animated cinema, even if the routes and mileage vary. “It’s time to see what I can do/To test the limits and break through,” as Elsa sings in “Frozen.” Suzu’s pilgrimage is somewhat complicated — certainly visually — but she too needs to “let it go” and cut free of her past and her trauma, an agony that the story doesn’t soften. Suzu is unequivocally, openly sad. Her shoulders sag and her head bows, she blunders and shrinks from others, sighing and weeping. Even so, she also questions, searches and keeps trying to sing. She lost her voice to grief; she wants it back.

Suzu is a poignant, sympathetic figure but there’s a welcome edge to her, a bit of stubborn prickliness that’s expressed through the animation, the character’s churning emotions and Nakamura’s sensitive, expansive vocal performance. The character design employs the pert nose, heart-shaped face and huge eyes that are standard in anime, but these conventions never feel static because Suzu isn’t. Delicately perched on that unstable boundary between childhood and adulthood, she slips from the comically juvenile (mouth agape) to soberly mature. She can seem younger or older than she is, but she’s never less than human.