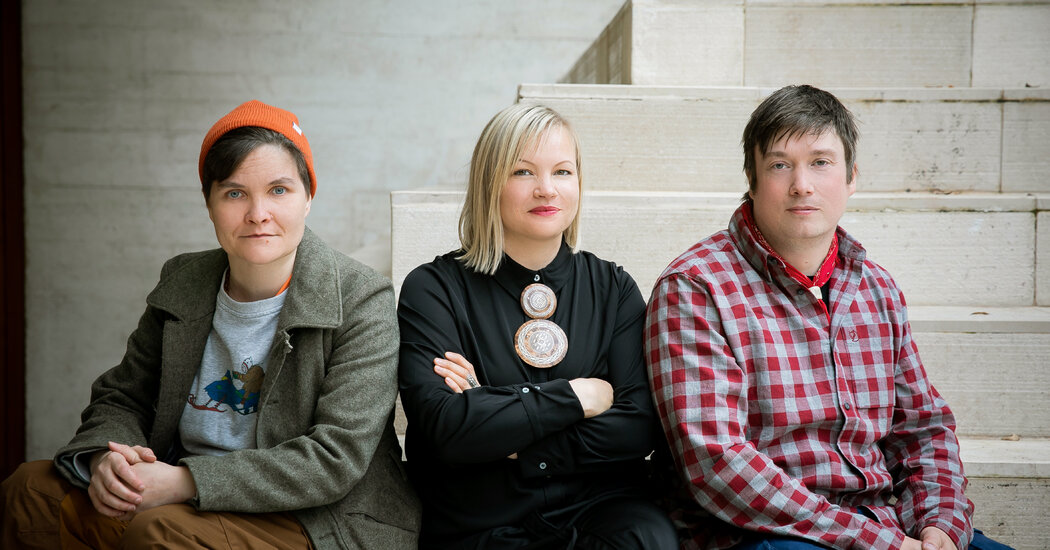 OSLO — Right about now, many members of the Sámi, one of Europe’s oldest Indigenous groups, are embarking on a spring migration, moving the reindeer herds upon which their livelihood and culture depend to grazing areas mostly north of the Arctic Circle. But this year, a handful are headed in the opposite direction. They are going to Italy, where for the first time, a national pavilion at the Venice Biennale will be devoted entirely to Sámi artists.

The Biennale, probably the world’s most prestigious art event, opens to the public next Saturday. It has included Indigenous artists before. But in a show organized along national lines, the decision to devote an entire pavilion to people whose identity transcends the territorial boundaries long imposed on them makes a strong political statement.

Usually, Finland, Norway and Sweden share a space at the Biennale known as the Nordic pavilion. This year, it has been retitled the Sámi Pavilion, in a gesture of recognition from three nations that many Sámi see as their colonizers.

Jolene Rickard, a member of the Tuscarora Nation and a professor of art history at Cornell University who specializes in Indigenous art, said that the decision was significant. “It acknowledges the Sámi as a nation that exists across contiguous borders; it makes space for a different notion of nation,” she said.

A traditionally seminomadic people who number around 80,000, the Sámi are scattered across roughly 150,000 square miles across the northern parts of Finland, Norway, Sweden and the Kola Peninsula, in Russia. In the 19th and 20th centuries, the governments of those countries suppressed the Sámi languages and forced cultural assimilation on the Sámi, denuding the forests where they lived and hunted, and opening their lands for settlement.

In recent decades, the Sámi have fought — often unsuccessfully — to protect their lands against the extraction of minerals and timber, their migratory routes from development and their traditional reindeer herding practices from state control.

And although the Sámi have lived in northern Scandinavia since well before the Vikings arrived, they have little representation in Nordic culture. Katya García-Antón, director of the Office for Contemporary Art Norway, an Oslo-based organization that has overseen the Nordic pavilion, said that she first noticed this absence when she moved to Norway from London in 2014. “I could see that there was a huge gap, a definite divide between the Sámi and the Norwegians,” she said. “So I thought, this seems to be an area where we, as an organization, could try to create bridges.”

The Sámi Pavilion, which García-Antón is curating with the Sámi scholar Liisa-Rávná Finbog and the Sámi handcrafter and activist Beaska Niillas, will feature the work of three artists who are also involved in political activism.

“These Sámi artists are trying to live their lives,” said García-Antón. “But there are obstacles — structural obstacles, legislative obstacles, philosophical obstacles — that aren’t allowing them to do that,” she said. Art, she added, was “a place in which they can operate with much more freedom than they can if they go the legal route, or even the educational one.”

Máret Ánne Sara, a Sámi artist from Norway who will show work in the pavilion, has described her art as “a protest and a symbol.” When her brother brought a case against the Norwegian government in 2016 over the slaughter of some of his herd, she created an installation outside the courthouse of 200 bloody reindeer heads. A later sculpture, called “Pile o’Sápmi,” made from reindeer skulls, was shown at Documenta, another prestigious international art show, in 2017.

Sara has declined to give details of the work that she will present in Venice, but García-Antón said that it would incorporate reindeer, too.

Legal conflicts are also at the heart of works that another Sámi artist, Anders Sunna, will show in the pavilion. From the time he was 6, said Sunna, who is from Sweden, he wanted to be both an artist and a reindeer herder. But, he added, “the artist thing is working better at the moment.”

For the past 50 years, his family has been involved in what he described as a David-versus-Goliath legal battle with the Swedish state over a decision to strip his family of its herding rights and relocate its members from their traditional home.

Early in his career, his paintings addressed broader themes, Sunna said, but when the family began running out of legal options, his work, which now also includes large-scale installations, became more closely focused on those struggles.

“We had tried everything else,” Sunna said. “We had tried the courts; we tried meeting with the minister, but nothing happened,” he added. “So I almost naturally started putting it into my art instead.”

For Venice, Sunna has created a painting series representing significant moments in his family’s legal battle, which he will display with documents and audio from the court proceedings.

The contribution of the third creator whose work will go into the pavilion, the performance artist and theater director Pauliina Feodoroff, is more abstract, but no less politically grounded. Although initially reluctant to accept the invitation, she said, she was persuaded when García-Antón argued that the Venice Biennale was a megaphone that could amplify environmental and Indigenous activism.

“The main core of my work is survival of the forests,” said Feodoroff, who comes from Finland. “And the biggest act of colonial violence against the Sámi was the industrial logging on our lands” that started after World War II, she said. “Our land became the republic’s” and the trees “were chopped down,” she added.

Her Venice contributions will include live and recorded performances. But she has also developed a novel idea intended to protect those forests in a tangible and immediate way: She will auction off viewing rights to specific pieces of land and use the proceeds to purchase the land in question. (Although the real bidding will take place off-site, the auction will be incorporated into the artist’s performance in Venice.)

All three artists expressed hope that their work at the Biennale would not merely raise awareness of the conditions under which the Sámi live, but also change those conditions. There are already signs that the Nordic countries are at least becoming more alert to the issues: When the new National Art Museum in Oslo opens its doors, in June, for example, the first work that visitors encounter will be Sara’s reindeer skull work that appeared in Documenta.

Rickard, the art historian, said that although experience had taught her to be skeptical, she was hopeful that the show at the Biennale would be a meaningful step for Sámi sovereignty.

“I’m not suggesting that the Venice pavilion will translate into real political gains,” she said. “But art is anticipatory. It can generate an awareness of resilience and survival that can lead to a renewal of Indigenous space.”