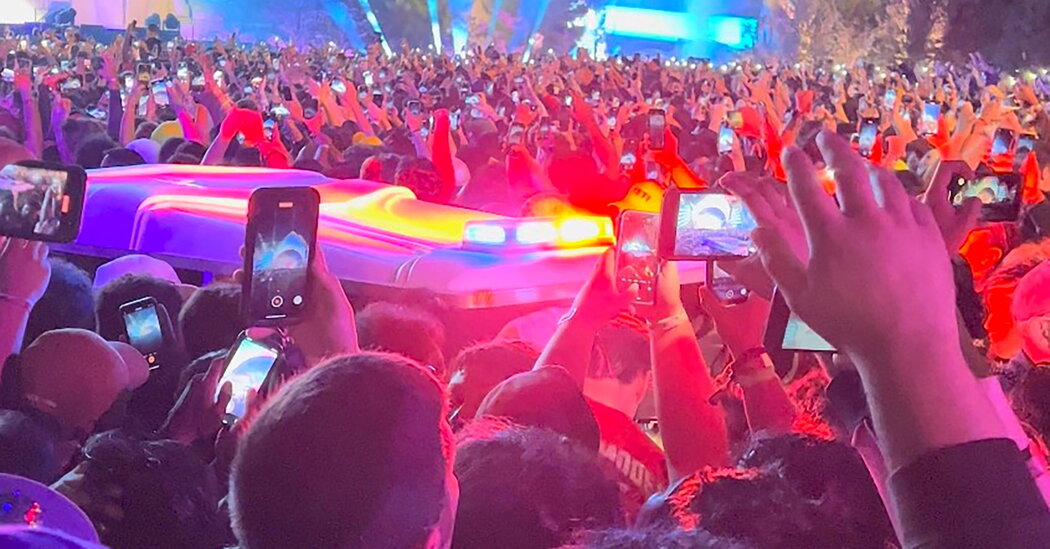 Mr. Scott, who is from Houston, has deep roots in the city and connections to Mr. Turner, who said he had worked with Mr. Scott and his mother over the years. The mayor, who gave Mr. Scott a key to the city in 2019, has celebrated the musician’s career and his foundation’s work on behalf of underserved communities in Houston. “This is a tragic case, and that’s why I want a very, very thorough investigation of this,” he said.

Those who regularly attend large festival concerts — including previous Astroworld events — said something about the crowd behavior on Friday felt different.

“It was crazier than in 2019,” said Vanessa Johnson, 21, who also saw Mr. Scott perform that year, during which similar scenes, though less intense, had played out. “I’ve been to a lot of festivals and people always pass out.”

A 26-second video posted on Reddit showed one person climbing up onto a riser from which a cameraman was recording the concert, and calling for the performance to stop, shouting that people were dying. Other people could be heard insulting him and telling him to “calm down.”

In the separate video of the concert, Mr. Scott could be heard saying, “If everybody good, put a middle finger up to the sky.” The video showed the ambulance in the crowd, surrounded by people holding their phones, many with a middle finger extended.

Then, two men who appeared to be part of Mr. Scott’s entourage approached him on the stage. He shooed them away and turned to the crowd, asking those present to put “two hands to the sky.”

The video showed the performer raising his hands in the air.

“Y’all know what you came to do,” Mr. Scott said to the crowd. Then, as the music resumed, he urged the crowd to make the “ground shake.”

The concert, which continued for about another 30 minutes, ended with Mr. Scott waving to the crowd and jogging offstage as he said: “I love y’all. Make it home safe. Good night!”