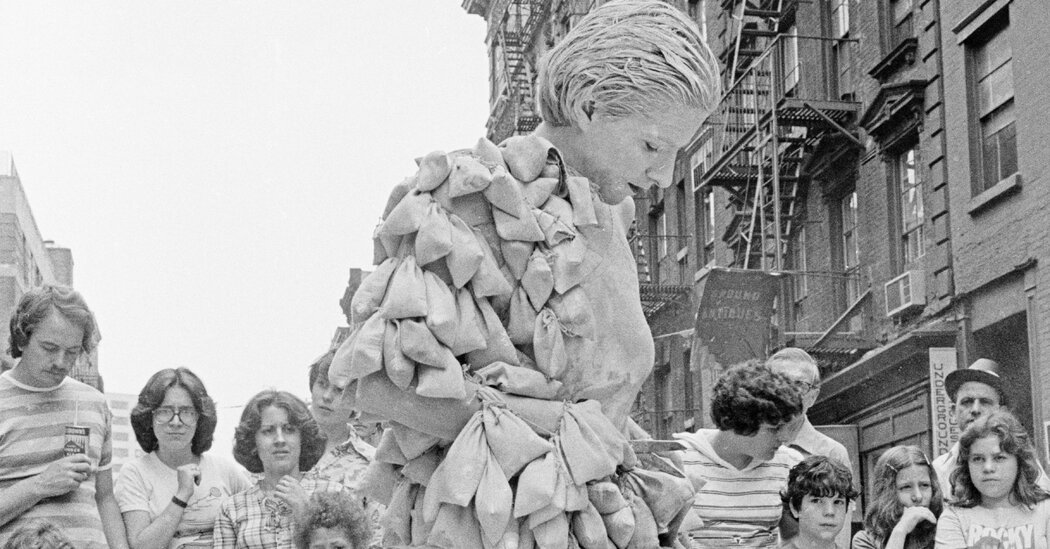 For the artist Betsy Damon, the 1970s were a time for rediscovery: During that decade, she found the feminist movement, left her husband and came out as a lesbian. She also began performing by covering herself in small bags filled with flour and painting her body and hair white, with blackened lips. She called herself the “7,000 Year Old Woman” (1977-78) and walked slowly in a spiral while cutting open the bags with scissors, symbolically freeing herself from the burdens of patriarchy.

Damon has been an eco-artist and activist since the 1990s. Her show “Betsy Damon — Passages: Rites and Rituals,” curated by Monika Fabijanska, spotlights her early feminist performances. Represented mostly by photographs and written recollections, they are radical relics of a time when many artists from oppressed groups were finding their voices through experimentation. Damon’s work seems almost like creative consciousness-raising. In “A Shrine for Everywoman” (1980-88), women were invited to write down their stories and place them in small bags, which were strung up like flags to demarcate a space of communion.

It can be hard to grasp the power of Damon’s pieces secondhand, but what comes through is her embrace of vulnerability and commitment to community. She opened herself up and challenged others to as well — and the photos suggest that she succeeded. One picture shows a group of people watching her performance “Blind Beggarwoman” (1979-80) on Wall Street. They seem to regard the art with skepticism but are also transfixed, a reluctant audience unwilling to look away. JILLIAN STEINHAUER

Born in Mexicali, Mexico, Reynaldo Rivera was in California as a teenager in the mid-1970s. There, working on fruit farms and in canneries, he found a camera and taught himself how to use it. He settled in Los Angeles and began photographing the local rock music scene, but found his most absorbing subject in the city’s drag bars, particularly those that drew a Latino audience.

“Kiss Me Deadly,” his New York solo debut at Reena Spaulings, is made up largely of black-and-white pictures of those bars and their performers: Miss Alex at the Silverlake Lounge; Melissa and Gaby at La Plaza, and Yoshi, the proprietor/star of Club Mugy’s. What distinguishes Rivera’s view of the performers is that he takes them seriously, lets them look as glamorous — as funny, gorgeous, too-much — as they wanted to be, and were. He’s not an outsider looking in, but an insider capturing a world he knows and loves.

It’s good that he did capture it, because the club life of that time — the 1980s and ’90s — is mostly gone. Gentrification, drugs and AIDS took it out. If you want to get a deep sense of it, I highly recommend a book of the artist’s work, simply titled “Reynaldo Rivera” and published in 2020. Edited by Hedi El Kholti and Lauren Mackler, it has many more pictures than in the show. It also includes valuable essays by Luis Bauz and Chris Kraus, and a lengthy email exchange between Rivera and the artist-performer Vaginal Davis, a vital veteran of the history that this photographer has preserved. HOLLAND COTTER