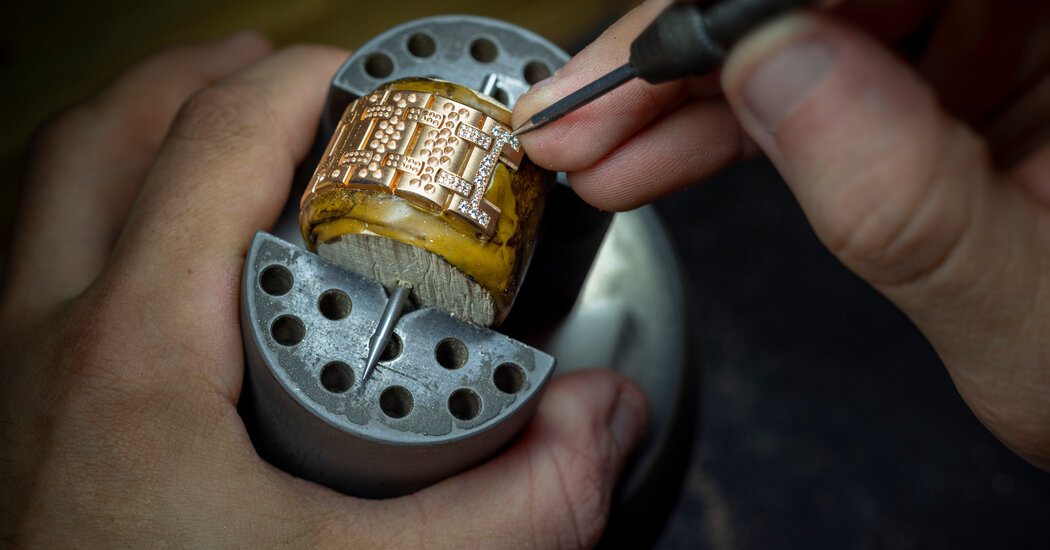 GENEVA — If you’ve never heard of the business called Salanitro, that’s just as Pierre Salanitro would have it.

On the outskirts of Geneva, the name doesn’t appear on the roadway sign listing the enterprises (including two chocolate manufacturers, this being Switzerland) that occupy a nearby office building. Salanitro is not on the building’s directory, or even on the door to Mr. Salanitro’s office. There’s only his logo, a series of circles within a circle, a representation of the disc with various sized indentations used to calibrate the size of gemstones.

That’s even though, as Mr. Salanitro said, he is “considered the most important gem setter for jeweled luxury watches in Switzerland, surely, and some people say I’m the biggest in the world for high jewelry watches.”

Audemars Piguet is one of his clients, and the brand’s chief executive, François-Henry Bennahmias, concurs: “Salanitro is one of Audemars Piguet’s most strategic partners, and their know-how is a reference for the whole industry. Pierre and his team are doing a tremendous job.”

The Salanitro team of 230 employees, including 107 gem setters, adds the sparkle to the watches of Patek Philippe, Audemars Piguet, Hublot, Zenith, Graff, Tiffany & Company and the Unnamed Society, and those are just the companies that gave permission for their names to appear here. The brands that wouldn’t allow their names to be used, and there are dozens of the very best, are just as illustrious.

Salanitro S.A. could be a business-school case study on how success can be achieved without promotion, but by doing a good job with passion.

Mr. Salanitro, 56, was born and grew up in Geneva and, after graduating from business school, worked in commercial banking. It was not a love match. One day in the mid 1980s, a friend suggested they meet at his father’s atelier, where gems were set, before going to lunch.

“As I talked for a few minutes with his father, I watched three gem setters at work,” Mr. Salanitro said — then he recalls turning and asking, “When can I start work?”

But by 1988, sales of jeweled watches had declined sharply and the atelier needed to reduce staff. Mr. Salanitro said he volunteered to go because “I always had a dream to be my own boss.”

So with the 20,000 Swiss francs (now $21,775) that he had saved, he bought a desk at Ikea and set up shop. The first couple of years were difficult — he did not get a lot of watch-related work — but there was a silver lining: “I did repairs on jewelry for Swiss companies and learned more about gem setting.”

Then, after two years with “no holidays and no weekends, I got lucky,” he said. “Piaget had too much work” and contracted with him to pick up the slack. Eventually other major brands hired him as well, and, as he said, “all doors were opened.” In 1999, he expanded and now producing watch components and even assembly is a major part of the business.

The business is continuing to grow, and Mr. Salanitro expects to add 27 more gem setters by summer, which would bring the total number to 134. The company occupies three floors, totaling 3,300 square meters (a little more than 35,520 square feet). A visitor walking through the facility may see all the stages of making a watch: designing, metal cutting, polishing, assembly and, of course, setting the final product with gems.

The work requires a great deal of machinery, such as the 3-D printers that create prototypes of parts and the C.N.C. machines — the initials stand for computer numerical control — that are programmed by the company’s own specialists to cut all sorts of components.

“Many watch manufactures have a few C.N.C. machines for jeweled watches,” Mr. Salanitro said. “We have 35, with two more on the way.” Three teams work in eight-hour shifts from Sunday night through to Saturday morning to keep the C.N.C. production going.

When it comes to the gemstones, some brands supply their own, while others rely on Salanitro to source them. There is a room with workers whose job is to assess and sort all the gemstones, by color, cut, size and weight. Properly checked, the piles of tiny dazzling diamonds on each desktop are separated into containers the size of small pill boxes — like 36 diamonds in one, 360 in another — to be set into the corresponding watches. (Mr. Salanitro has 60 big gray metal safes to keep such precious materials, so as to “not have everything of value in one place.”)

There is one room where diamonds are cut, and another room where colored gems are cut. “Diamonds are so hard,” Mr. Salanitro said, “that when they’re cut, if the dust would get into a machine for cutting colored gemstones, it could break it.”

Back out on the floor filled with white-coated gem setters, watches were being created. On one desk was a white plastic disc bearing the 384 colored sapphires of Hublot’s Classic Fusion Takashi Murakami Rainbow watch, waiting for the gem setter to transfer them to a watch dial. At another desk, a gem setter was placing the diamonds onto a Graff butterfly dial. At a third, diamond baguettes were being set in a gold Patek Philippe watch bracelet while, at another, an Audemars Piguet Royal Oak strap was getting bedazzled.

There is another Salanitro service that, when a brand asks, becomes one of the last steps before a watch is finished: All the specifications, such as the brand, the reference number and the metal used, are laser engraved on the back of the case.

It has taken Mr. Salanitro 32 years to get to this level of success, although, he said, if you counted all the hours he has worked in that time “you can add 10 years.”