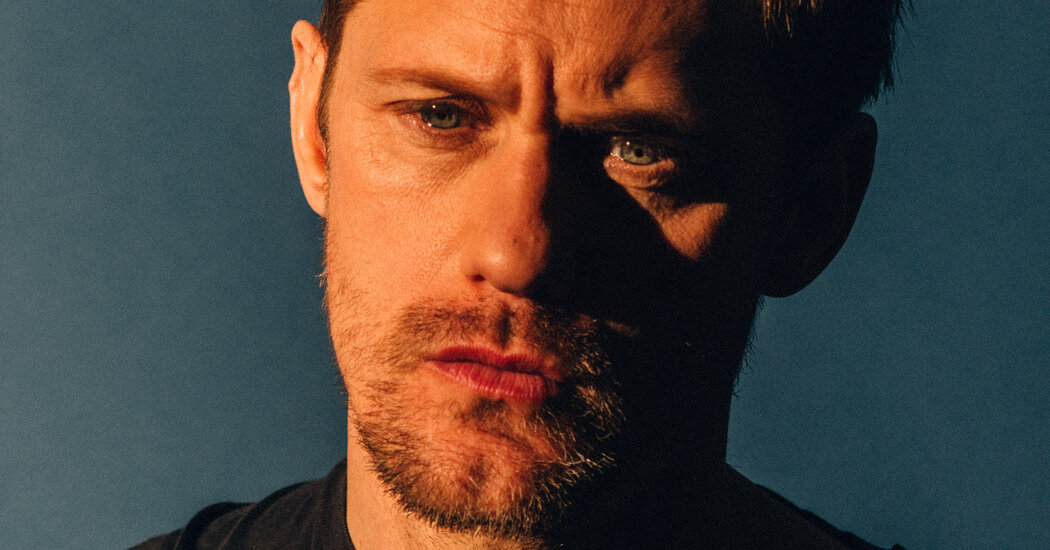 LONDON — In Alexander Skarsgard’s telling, the idea for what eventually became his latest film, “The Northman,” has its roots on a long, slender island off the coast of Sweden called Oland, where his great-great grandfather built a wooden house a hundred years ago.

“Some of my earliest memories are from walking around with my grandfather on Oland and him showing me these massive rune stones and the inscriptions,” he explained on a recent rainy Monday over lunch at a hotel tucked away in central London. “Telling tales of Vikings that sailed down the rivers, down to Constantinople.

“So, in a way,” he continued, “you could say that the dream of one day making or being part of a Viking movie was born in that moment.”

Wearing a gray crew-neck sweater and dark jeans, he was centuries away from the bloody, muddy berserker he plays in “The Northman,” the much-anticipated action-adventure that marks the director Robert Eggers’s leap into big-budget filmmaking.

Six-four, blond and indisputably handsome, Skarsgard would seem a no-brainer to launch a Viking film, but getting this film made took awhile. Skarsgard said he spent years working with the Danish film producer Lars Knudsen trying to determine what shape the project would take. Then, in 2017, he met with Eggers, who had fallen in love with Iceland during a visit two years earlier, to talk about another project.

Skarsgard and Eggers both describe that meeting as “fated,” and it eventually led Eggers, along with the Icelandic poet and author Sjon, to write “The Northman.” Eggers, who said he had $70 million to make the film, took some inspiration from the 1982 “Conan the Barbarian,” which he watched as a kid.

Skarsgard’s character is a Viking prince, Amleth, bent on vengeance after his father is murdered. Skarsgard is a producer of the new film, which opens on April 22 and also features Anya Taylor-Joy, Nicole Kidman and Björk, among others.

“It was a real treat as an actor to be part of the project from the genesis,” Skarsgard said. “To be part of that journey and to be able to continuously have these conversations with the screenwriters as they are shaping the story, talk about the arc of Amleth, the story, the essence of it — that was very inspiring to me.”

The star, 45 and unfailingly polite, has played a Viking before. In fact, he’s played a Northman before: Eric Northman, the proudly undead, ultrasexy Viking vampire on the HBO series “True Blood.” But the title character of “The Northman” is a Viking after Skarsgard’s own heart — one faithful to the medieval lore of the Icelandic sagas, one who doesn’t question fate or faith. And one who, by design, doesn’t have a lot to say.

The sagas on which the film is based are “very laconic,” he said. And the characters “don’t really speak unless absolutely necessary.”

Skarsgard himself is open, with an easy smile. He’s aware of the world around him, including being up-to-date on the latest news from Ukraine and knowing that asparagus season is upon us. He gave questions his full attention, pausing to gather his thoughts before answering — and not once glancing at a cellphone.

Though he grew up hearing Viking stories, Skarsgard read books and watched lectures on them to prepare for his role. He said the most interesting thing he learned was that Vikings believed each person had a female spirit guiding them.

“I thought that was quite fascinating, the juxtaposition between that and the brutality you see when you first meet Amleth,” Skarsgard said. He added, “That he would have believed that there’s a female spirit inside of him that guides him, I really liked that idea.”

His preparation complete, it looked as if everything was coming together on the film. Just as shooting was set to begin, the pandemic hit.

“For about 48 hours we were still moving forward, but everyone was like, ‘Is this happening? Are we doing this? What’s going on?’ And then finally, they pulled the plug and said we have to break and that we’re going home.”

Though Skarsgard considers New York his base, going home meant heading to his hometown, Stockholm.

He holed up with his large family at his mother’s country house. He’s the oldest son of the actor Stellan Skarsgard and his first wife, My, and one of eight siblings. Three of his brothers are also actors, including Bill Skarsgard, who played Pennywise, the creeper clown in the “It” movies; another brother is a doctor who kept them apprised of developments in the Covid crisis. Skarsgard said that despite the frightening circumstances, he enjoyed getting to spend time with his family.

“We cooked dinners and hung out, worked in the garden,” he said, adding that gathering the whole family can be difficult because work gets in the way. “I really enjoyed it. Then I felt almost guilty because it was a pandemic and people were dying.”

Family and Sweden, where Skarsgard grew up and spent some time in the military, are important themes in his life.

“We’re all a very tight group,” he said. “Everyone lives within two blocks of each other in South Stockholm and we see each other all the time when I’m home.” (He is not married but answered with a resounding “no” when asked if he was single.)

He started out as a child actor but took a break beginning in his early teens before fully embracing an acting career in his 20s. He has said in the past that he didn’t like the attention acting brought him when he was young.

His path to “The Northman” runs through dozens of roles in film and TV, some seemingly different sides of the same coin. He’s played an Israeli spy (“The Little Drummer Girl”) and a German man coming to terms with life after World War II (“The Aftermath”). A young Marine who helps the United States invade Iraq (“Generation Kill”) and a sadistic Army sergeant who leads young recruits astray in Afghanistan (“The Kill Team”). An abusive husband (“Big Little Lies”) and an achingly sweet stepdad who steps in to care for his neglected stepdaughter (“What Maisie Knew”).

Mark Mylod, an executive producer on the show who directed Skarsgard in two of the three episodes in which he appears, said the actor “was really the only choice for the character because of the intelligence of his work.”

The makers of “Succession” had envisioned a character with “that kind of Elon Musk” charisma but not necessarily based on the Tesla chief executive. The Matsson character had to have the gravitas to be a genuine rival to the family behind Waystar Royco, the fictional company at the heart of “Succession,” Mylod said.

“He found a way to make that character so fantastic and watchable and totally credible,” Mylod said. “With a small number of scenes, he made such an impact.” (Mylod wouldn’t say if Matsson is returning in Season 4.)

Rebecca Hall, an actor who had worked with Skarsgard on “Godzilla vs. Kong,” said she had struggled to get financing for her own passion project, “Passing,” her adaptation last year of the 1929 Nella Larsen novel about the friendship between two Black women in New York, one of whom is passing as white.

While working on “Kong,” Hall got up the courage to ask Skarsgard to read her script. He did and agreed to play the part of a racist husband. “I got the sense that he cares about good art being in the world and will do what he can to support that,” Hall said in an interview, adding that the character was the kind he had played well. “He’s no stranger to complicated characters who do bad things.”

For Skarsgard, “there is zero strategy or plan” to his career. “The sweet spot is when I’m intrigued by the character, and I understand aspects of him and he makes me curious to learn more,” he said. “That’s superfun because then that means that I’ll probably enjoy diving in and exploring that a bit deeper.”

On “The Northman,” diving in meant bulking up. He is also reunited in the film with Kidman, who played his wife in “Big Little Lies,” for which he won an Emmy, a SAG Award and a Golden Globe. This time she’s his mother.

The two actors traveled with the rest of the cast to Northern Ireland, Ireland and Iceland for the grueling “Northman” shoot. Skarsgard described it as “seven months in the mud.”

Eggers, an exacting and meticulous director, said that he was “not a sadist to be a sadist,” but that he was dead serious about detail and accuracy, which will come as no surprise to viewers of his earlier films, like “The Witch” and “The Lighthouse.”

Skarsgard has spoken in interviews about being shackled and dragged through the muck. But Eggers said that, like him, Skarsgard wanted the best result. “When we embarked on this together, he was after nothing but perfection.”

Eggers added, “Alex has sort of talked about me driving him to the edge, but there were many times that I can remember him asking for another take because he’s just as much of a perfectionist as I am.”

The director acknowledged that the working conditions were difficult. “I am not trying to make things hard for us,” he explained, “but when you’re telling the story of the Viking Age in Northern Europe, you’re going to seek punishing locations, with extreme weather and terrain. And that’s just what it needs to be to tell this story.”

Working with such a large budget and cast were perks, Eggers said, but also meant a great deal of pressure. “If this movie doesn’t perform, that will be a problem,” he said.

After all of the work, Skarsgard said, “I just want people to see the movie, that’s it,” adding, preferably on the big screen.

As is pretty standard fare for a Skarsgard project, he’s naked in parts of “The Northman,” including during a fight scene in a volcano.

Does he ever just say no to taking off his clothes? He said he had recently done just that at a photo shoot after being asked to take his shirt off, saying, “I think there’s enough nudity in the movie.”

Skarsgard, who had spent the morning doing press by Zoom and had traveled around Europe promoting in the days before we talked, had by the end of the interview kind of slid down the banquette, resting his head against the cushion. He said he realized his films tend to be heavy. “I might have to do a comedy soon,” he said, adding that he would like to work with the satirist Armando Iannucci or the British comic actor Steve Coogan.

“‘The Northman,’” he said, “was so intense. It was the greatest experience of my career but, God, it was intense.”