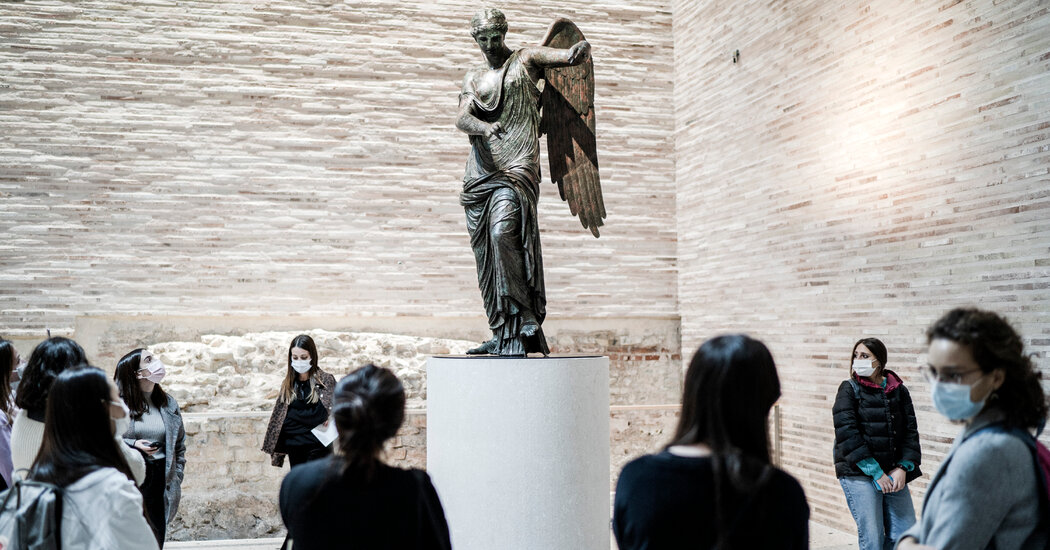 BRESCIA, Italy — Wearing a toga, the woman points out the top attractions of one of Italy’s more underrated cities: Look! Here’s the ancient Capitoline Temple. Over here you have the Renaissance-era piazza. And you simply must check out the side-by-side old and new cathedrals.

Then the tour guide performs a neat trick that would make Ovid proud: She metamorphoses into an winged statue, while a young girl looking on mouths: “Wow.”

The commercial, seen on national TV, encourages Italians to take in the sights of Brescia, an industrious northern city midway between Milan and Verona that is bypassed by most international visitors and whose considerable charms most Italians need reminding of, too.

The city is known for an ancient Roman sculpture that for nearly 200 years has been a symbol of Brescia’s resilience in times of trouble. And the artwork’s return to public viewing, after a lengthy restoration, couldn’t have come at a more apt time for a city, and a region, devastated by the coronavirus.

“The ‘Winged Victory’ is back, and Brescia is flying once again,” the commercial proclaims.

In 2020, Italy was the first country in Europe to have a major outbreak of the coronavirus, and cities in the Lombardy region — especially Brescia and Bergamo, its neighbor 20 miles to the west — became early warnings to the world of just how catastrophic the pandemic would be.

Thousands died here, and few Italians will forget the image of army trucks transporting coffins from Bergamo to remote cremation sites or cemeteries when the city’s morgues were overwhelmed just weeks into the outbreak. At one point that spring, Brescia’s hospitals had more coronavirus patients than any other place in Europe.

It was a time of “real terror,” recalled Brescia’s mayor, Emilio Del Bono, as just about everyone had a friend or a relative or a neighbor who died or ended up in intensive care. The coronavirus had completely infiltrated people’s lives; “you sensed it close by,” the mayor said.

Seven months ago, the virus was still very much an oppressive presence here, with infections traced to the Delta variant stretching the local health system well beyond its limits, once again.

Now, as contagions wane nationwide because of the government’s aggressive vaccination drive, and as coronavirus restrictions on social activities increasingly loosen, Brescia is experiencing a moment of “postwar euphoria,” Mr. Del Bono said.

City officials are trying to capitalize on those good feelings to promote a city better known for its industrial production — mostly machine tools and steel products — than as a cultural hub. And they have adopted the “Winged Victory” as the city’s spur to visitors.

“Life is returning to normal,” but people “still need a little nudge,” when it comes to traveling, Stefano Karadjov, the director of Brescia’s municipal museums, said of the national ad campaign.

Dating to the first century A.D., the “Winged Victory” was rediscovered on July 20, 1826, during an enormous archaeological excavation of Brescia’s downtown. The intact bronze statue was found in a hidden nook of a large temple, where it had been stashed centuries earlier.

The discovery made Brescia a must-see destination for 19th-century travelers on their Grand Tour of Europe, and copies of the statue came to be in high demand among museums and collectors worldwide.

The find revived local pride in Brescia’s Roman heritage, when Brixia, as the city was known in ancient times, was a thriving place, and the “Winged Victory” was a gilded beacon seen from afar by travelers on the ancient Via Gallica, which linked some of the most important towns in northern Italy.

As a cluster of kingdoms, papal states and communes began to successfully shake off foreign influences in the 19th century to be unified as the Kingdom of Italy, the “Winged Victory” became a symbol of civic identity and inspiration during the city’s 1849 insurrection against Austrian forces. The poet Giosuè Carducci wrote an ode to the statue that also celebrated Brescia as the “Lioness of Italy” because of its citizens’ bravery during a 10-day revolt for the cause of Italian unity.

That spirit survives today, residents say. “In general, this is a city of people who don’t give up,” said Nicola Albarelli, the owner of a toy store on a street leading to Brescia’s main hospital, where ambulances raced by nearly nonstop during the first three months of the pandemic.

In 1998, the statue was put on display in a city museum, but a restoration completed last year became the opportunity to reinstall the sculpture in the city’s archaeological park to better showcase the piece.

When President Sergio Mattarella of Italy visited Brescia last May, his first trip outside Rome after the third wave of the pandemic began to subside, he chose to speak from a podium inside the archaeological park to offer words of hope to the wounded city and the nation.

Images of and homages to the statue now festoon the city. Brescia’s main vaccination center has looped videos of the statue’s restoration to help citizens pass the time while they wait. The Italian artist Emilio Isgrò created a monumental installation featuring the “Winged Victory” for one of Brescia’s metro stations that was inaugurated a year ago.

And since the summer, the archaeological site has featured an exhibition of works by the Brescia-born and globally known contemporary artist Francesco Vezzoli, including his version of a better-known winged victory statue: the “Nike of Samothrace” in the Louvre.

The cultural reboot will get a further boost in 2023 when Brescia and Bergamo will share the title of Italy’s Capital of Culture, after other cities pulled out of the race during the pandemic to unanimously crown the hard-hit Lombardy towns.

“It was a gesture of great solidarity and generosity on the part of the mayors of other cities,” Mr. Del Bono said.

After the horrors and mourning of the pandemic’s worst weeks, Brescia’s residents are regaining a rare feeling: optimism.

“There’s a real desire to get on with things,” said Monica Ferrata, who works in a family-owned bookshop. Though the days, and nights, when “the wail of ambulance sirens seemed never to stop” still haunt her, she said, the mood in the city was positive. “I have a good feeling.”