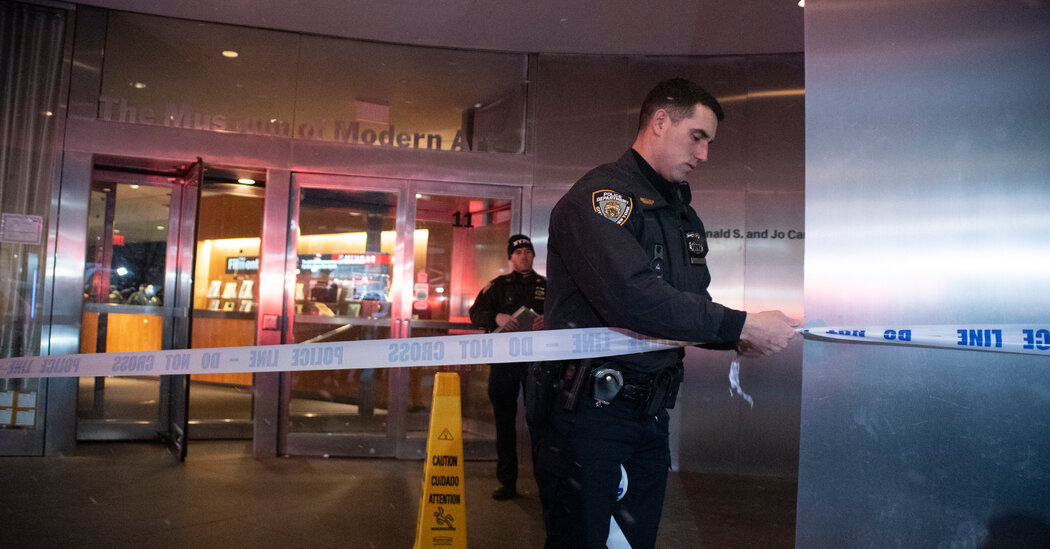 Karissa Francis has seen her fair share of drama in the seven years she has worked as a visitor services assistant in museum lobbies.

Patrons whose tickets have gone missing or don’t agree with pandemic mask requirements have been known to be quite vocal in their frustration. But she had not witnessed anything close to what happened Saturday afternoon at the Museum of Modern Art, where two employees were stabbed by a man after the institution revoked his membership.

“The way it happened felt almost worse than my worst fear,” said Francis, who works at the Whitney Museum of American Art and saw video of the attack. “The way he just rushed into the lobby — there is something so personal about the way he stabbed them as opposed to another sort of violence. It adds an extra layer of terror.”

Given the rarity of violence within museums, most are protected by security guards who are typically unarmed and capable of detecting and responding to events — but they are not equipped to do more than report an intruder with a weapon.

The Museum of Modern Art did not respond to questions about its security arrangements but the guard who responded Saturday — and threw something that looked like a binder at the attacker to distract him — did not appear to have a weapon.

Some cultural institutions have panic buttons at their ticketing locations that alert management and perhaps a few security officers with guns posted near main entrances, said Steven Keller, who has worked in museum security for more than 40 years and advises organizations like the Smithsonian Institution and the National Gallery of Art in Washington. But few guards are armed, for obvious reasons, he said.

“The last thing you want is a gunfight with 5,000 kids present,” Keller said.

As for whether museums might install bulletproof glass around their greeters following the MoMA stabbing, that is also unlikely, he said, given the rarity of such an event and museums’ interest in presenting a welcoming face.

Drew Neckar, a security consultant, agreed that acts of violence are so rare at museums that the industry standard for New York museums -— and office buildings in the city — is that security personnel are typically unarmed.

Guns involve “more risks and huge expenses,” Neckar said. “Scheduling someone with arms is twice or three times more expensive because of training and liability fees.”

Typically MoMA and the Metropolitan Museum of Art have armed New York City police officers outside their main entrances during visitor hours. But security experts said the attack on Saturday by an assailant who entered through a side door unfolded so quickly that there was little time for anyone to react. The man immediately jumped over the ticketing desk, cornering three people behind a desk and began jabbing and swinging his knife, injuring one employee in the neck and another in the left collar bone. The museum guard then attempted to distract him. A witness said that the attacker asked the guard where his gun was before fleeing.

On Tuesday, the New York Police Department announced that a suspect in the stabbings, Gary Cabana, had been arrested in Philadelphia. The museum released a statement hours later, saying, “We’re relieved and grateful that our colleagues are recovering, and the attacker was arrested.”

Though violent acts are rare, officials at several museums around the county said that the MoMA attack had certainly raised concerns. “We are reinforcing our safety procedures throughout the museum in light of what happened at MoMA,” said Norman Keyes, a spokesman for the Philadelphia Museum of Art.

Maida Rosenstein, the president of Local 2110, a chapter of the United Automobile Workers union that includes MoMA’s visitor services employees, said that workers at the museum are still on edge. Next week, union leaders hope to conduct a health and safety inspection of the museum to see what, if any, extra measures might be installed to protect workers from a future attack. Rosenstein said the museum has also hired counselors to support its staff members and is reviewing procedures.

“We want to push for measures that would improve workplace safety,” Rosenstein said, adding that she has spoken to other museums where she represents workers, like the Guggenheim, about security. “Our concentration is currently on supporting our members.”

Like many other museums, MoMA has experienced a staffing shortage in its security department after offering early retirement packages after the coronavirus pandemic hit. It is unclear how many security guards the museum now has because the museum declined to answer that question this week.

In the industry, guards and visitor guides are typically on the lower end of the pay scale and the brutal attack highlighted the potential risk associated with public-facing jobs at a time when many museum employees have joined new labor unions in pursuit of higher wages.

The starting hourly wage for guards at MoMA, who have long been represented by Local 32BJ of the Service Employees International Union, is $21.65. The Metropolitan Museum of Art administrators recently increased the starting wage for guards to $16.50 from $15.51 an hour. A Met spokesman said that over the last month, the museum had bolstered its security staff to 340 with the hiring of 40 new guards, who have been represented for years by Local 1503 of District Council 37, a union primarily for public employees.

Guards at the Seattle Art Museum only announced in January their intention to create a collective bargaining unit to pursue higher wages, better benefits and improved safety protocols.

Josh Davis, a Seattle Art Museum guard and an organizer of a potential new union, said that like museum security staffs around the country, the MoMA attack had led guards at his institutions to review their own protocols. Davis said the system in Seattle for handling potentially dangerous patrons relies on chain-of-command approval that may be too slow for resolving immediate threats. He added that the loss of longtime security officers during the pandemic has prevented new employees from learning best practices from more senior guards.

But the Seattle museum defended its practices, saying in a statement that its safety measures include Plexiglas shields installed as barriers at the ticketing desk, preparedness training for a variety of circumstances, including instructions to “radio for backup support should a visitor become agitated or overtly aggressive.” Next week, it said, staff members will begin to receive de-escalation training.

“The Seattle Art Museum,” the statement said, “takes the safety and security of our staff and facilities very seriously and will continue to do so, especially in light of the horrific incident at MoMA this past weekend.”