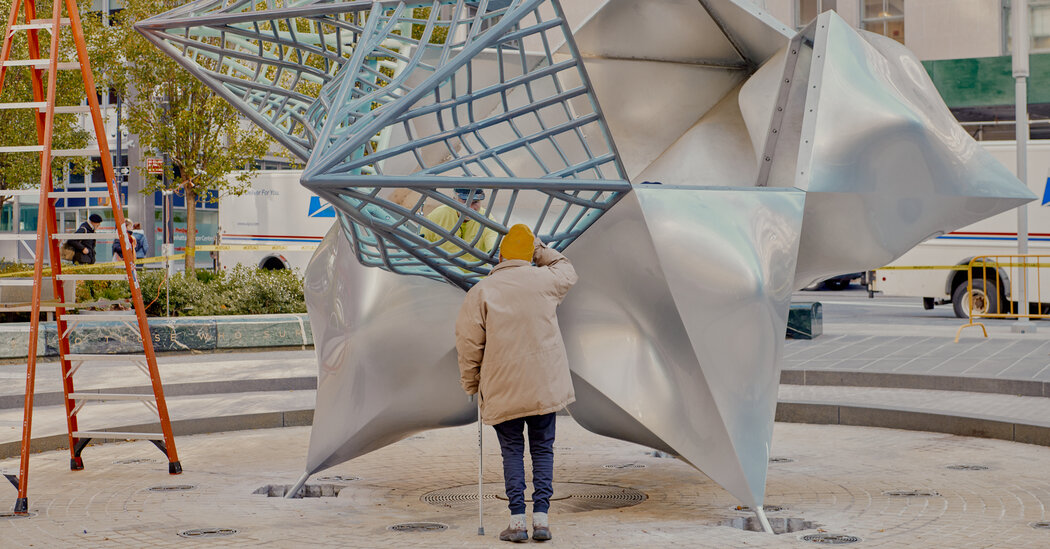 On a chilly Saturday morning last weekend, Frank Stella — 85, bespectacled, somewhat scruffy and holding a cane — was overseeing the installation of a sculpture called “Jasper’s Split Star” in the public plaza in front of 7 World Trade Center. “I’m not in such great shape,” he said more than once, but he still moved about his work with excitement, chatting up the small construction crew that was building out the sculpture using a large crane (though, perhaps tellingly for this part of New York, not the largest crane within view).

They were handling Stella’s work with the ease of seasoned veterans; two of their ranks confidently clutched foil-wrapped sandwiches in one hand as they rigged up a section of the sculpture to the crane with the other. “What’s amazing about these guys is they’re not even wearing gloves,” Stella said, visibly impressed.

“Jasper’s Split Star” is a sculpture from 2017 that Larry Silverstein, the building’s owner, acquired as a replacement for a Jeff Koons work that was previously on long-term loan in the plaza. The Stella piece had previously been exhibited at the Aldrich Contemporary Art Museum in Connecticut and was in Stella’s studio upstate when Silverstein reached out, looking for a new piece for the site. (He declined to say what he paid Stella for the work.)

“Jasper’s Split Star” is constructed out of six small geometric grids that rest on an aluminum base shaped roughly like a flower petal. From a certain angle, it looks enough like a jungle gym that one spectator said aloud, “I’m wondering when the first kid is going to climb on it. I give it three hours.”

It’s a homecoming of sorts for Stella, who had two large-scale paintings grace the lobby of the original Seven World Trade Center. Both “Telepilus Laestrygonia I” and “Telepilus Laestrygonia II” were lost when the building was destroyed on 9/11. The sculpture is loosely based on Stella’s 1962 painting, “Jasper’s Dilemma,” which features two abstract, almost mathematically precise panels, one vibrantly colored, the other rendered in dour gray, and was itself inspired by a quote from Jasper Johns: “The more I paint in color, the more I see everything in black and white.”

“He may have said that,” Stella said of the inspiration behind the work, “but I certainly forgot it.” Of Johns, a contemporary (he’s 91) and the current subject of a retrospective at the Philadelphia Museum of Art and the Whitney Museum, the latter just a couple of subway stops from 7 World Trade Center, Stella added, “I was always tremendously impressed by the way he laid the paint down.”

Stella said that seeing the Johns show at the Whitney had him thinking about the past — namely the Leo Castelli Gallery, the legendary art dealer Stella shared with Johns, and where both had their first solo shows many decades ago. “It was really quiet and comfortable, and you just had to go and see what everyone was doing,” he said. “And then you got to eat Chinese food after that. After 1980, it was over. Or over for me. Jasper was older by then — and it turned out I was old too by then, but I didn’t know it.”

What he liked about Castelli was that “it was so straightforward,” a quality shared by Stella and his work. He once famously described painting as “a flat surface with paint on it, nothing more.” He’s still good for a laconic quip. Asked if there was too much money in the contemporary art world, he groaned and said, “Not enough.” And of the auction houses, Sotheby’s and Christie’s, where his work has sold for up to eight figures — his auction high was $28.1 million, at Christie’s in May 2019, for “Point of Pines,” which he painted at the age of 23 — he said, “By and large, they’re pretty chicken.” (Somewhat surprisingly, he’s a fan of the Oculus Transportation Hub, home to many subway lines, which juts out of the Financial District like a rib cage and is visible from 7 World Trade Center. “It’s a miracle that got built,” he said. “There’s nothing else like it.”)

Stella and the rest of the early Castelli roster — which also included Roy Lichtenstein, Robert Rauschenberg, James Rosenquist and Andy Warhol — were among the most scrutinized artists in history, their aesthetic decisions tracked and decoded as if their work were the Rosetta Stone for understanding American culture.

“People used to talk about artists and say things like, ‘Oh, now he’s lost it,’” Stella said. “And what now seems like minuscule phases and changes in the work were at the time the end of a career. It was kind of a joke. But it was serious in the way people reacted to it.” For a period of time, the star — a shape that recurs in Stella’s work, and which he began using in the 1960s — was something the artist wouldn’t go near. The name “Stella” is Italian for star, and he worried the work was too on the nose.

Of course, that didn’t seem to matter much anymore. One benefit of getting older, he said, is that “you get tired of worrying about those kinds of things, and you just go with it.” Gesturing at his work, he concluded, “I mean, it’s hard to pass this up.”

Silverstein, 90, the developer of the original Seven World Trade Center as well as its reconstruction after 9/11, was responsible for bringing Stella into this environment. During construction of the building, which opened in 1987 and was designed by Emery Roth and sons, Silverstein had become enamored with a certain kind of granite, which he used for the lobby. “I put it on the floors, the walls, the ceilings, the toilets,” he said in a phone call. “Everything! When it was finished, I looked at the lobby and I realized it looked like a mausoleum.”

This caused him and his wife to start looking at contemporary art for the space in order to “make it come alive.” In this way, they stumbled upon Stella, whose work became a kind of center of gravity. People would collect in front of it in the morning on their way up to work, along with other works the Silversteins acquired.

Silverstein and his wife, Klara, now live about a block away from 7 World Trade Center. They moved from Midtown after a realization in their old building’s elevator that all of their neighbors were “a bunch of old fogies like us,” as Silverstein put it. “And I finally said, I think it’s time to get the hell out of here.” This area, lurching back to life after a mass exodus during the pandemic, is noticeably more vibrant. “You’ve got baby carriages and mothers and pets,” Silverstein continued. “I don’t know where they got the money to pay for these apartments, but they’re young. It’s phenomenal.”

And in Stella’s work, they’ll have a new local landmark. “It’s permanent as long as Larry leaves it there,” Stella said with practiced nonchalance. As the crane lowered the final section into place — “the last piece of the puzzle,” he joked — the artist admired the way the sun was hitting the work. The colors were vibrant, but they didn’t hit you over the head. They were subtle. “Like Jasper,” Stella said.