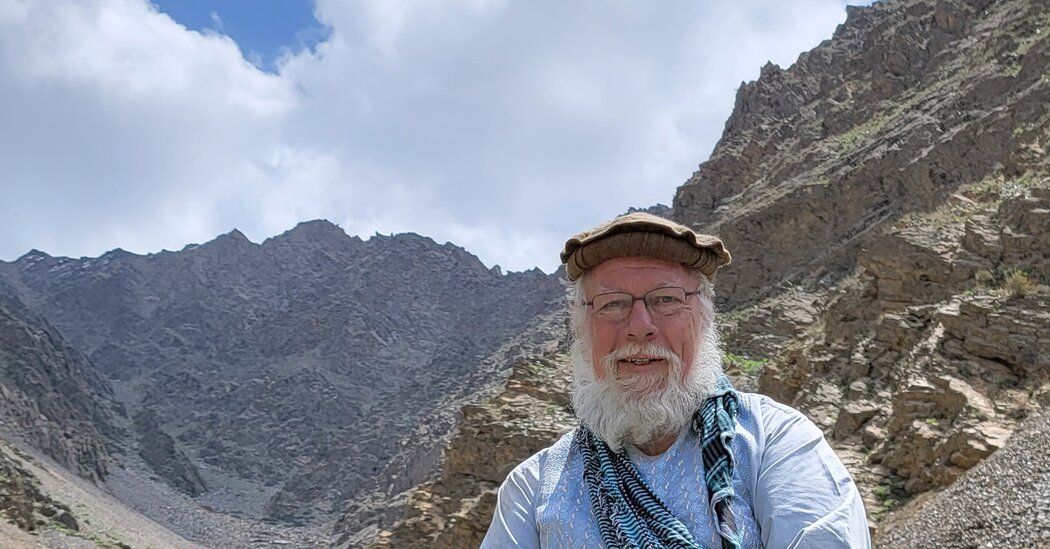 In 1972, Gary Bowersox, a Vietnam War veteran who had owned several retail jewelry stores in Hawaii, paid his first visit to Afghanistan. Determined to grow his burgeoning gem dealing business, he was attracted by the country’s 7,000-year-old deposits of lapis lazuli at Sar-i-Sang in Badakhshan Province, which for millenniums have drawn traders to this ancient crossroads on the border of what is now Tajikistan.

It would become the first of many trips, the most recent of which was less than three months before the Taliban regained control of the country and Western forces withdrew their troops.

“I had met an Afghan going to school in Hawaii whose father was the lead geologist at Kabul University, so that was my entree to the country,” Mr. Bowersox, now 81, recalled in mid-October on a video call from his home in Honolulu.

“We met every night and he gave me lectures on all the different mining situations,” he said. “They had very detailed maps and reports, mostly done by the Russians, and that was the basis of my book, ‘Gemstones of Afghanistan,’ published in 1995. It hasn’t really changed since then.”

“I’ve been almost every year except a couple years when there were serious problems,” he said. “I’ve got such good friends there.”

This past spring, Mr. Bowersox spent three weeks in Afghanistan, including three nights in the Panjshir Valley, where commercial quantities of emeralds were discovered in the 1970s. (In 2020, he signed a three-year contract with U.S.A.I.D., the United States Agency for International Development, to serve as its senior adviser for gemstones and bolster its mission to increase gemstone exports from the country.)

“The only thing that hurts me,” he said with a chuckle, “is when an Afghan says, ‘My grandfather said to take care of you.’”

During the interview, Mr. Bowersox reflected on his 50 years of traversing the Hindu Kush; his friendship with Ahmad Shah Massoud, the mujahedeen leader who was assassinated by operatives of Al Qaeda just days before Sept. 11, 2001; and how he thinks the country’s gem trade will fare under the Taliban’s new rule.

The following conversation has been edited and condensed.

For people who aren’t familiar with the gem trade, how would you describe Afghanistan as a source?

Extremely wealthy and basically at the beginning of production. Mining has gone on for 7,000 years up and down the country. The Taliban are going to want to get involved with the gem trade because it’s income to the country, and people in the local areas all need jobs and income. The gem business will continue no matter who’s in control.

Over the 50 years you have traveled there, what were the highlights?

Hiking and camping in the summer by horseback, going all over the northeast part of Afghanistan. The Afghans are some of the most wonderful people I’ve ever met. There are no hotels or motels, so we would just knock on a door; I don’t ever remember getting turned down. They’d invite you in for dinner — even Marco Polo wrote about how friendly the people were.

In the summer of 2001, you filmed a documentary in Afghanistan with the BBC in which you spoke of your friendship with Ahmad Shah Massoud. How did you meet?

We met in 1989. It began with my sending a letter to him — this was before satellite phones. It took a month to get a letter back. He invited me to visit him the following summer.

With the departure of the U.S. military on Aug. 30, Afghanistan quickly fell back under control of the Taliban. Across the country, there is widespread anxiety about the future.

I met with him way north of Panjshir; he wanted to develop the emerald mines. For three or four years, I would fly into Uzbekistan, drive to Tajikistan, and Massoud would arrange a helicopter to take me into Panjshir. So on every trip we got to meet and look at stones.

He was a super guy. There was never anybody like him in the whole world. He didn’t really walk on the flat of the earth; he was like a foot above it.

I had just come back from Afghanistan and was doing a gem show in Tennessee. I had an RV, and was going from city to city, and had the TV on. I saw the second airplane crash into the towers. That was terrible. But we were still totally in mourning because Massoud had been assassinated a few days before.

My shows were all closed down because I used the name “The Afghan Connection.” All the jewelers canceled — they didn’t want the bad publicity. Ten days later, I got calls from intelligence officers and the C.I.A., who all wanted me to come to Washington. So I moved to Washington in my motor home and I worked with them for months.

Understand the Taliban Takeover in Afghanistan

Who are the Taliban? The Taliban arose in 1994 amid the turmoil that came after the withdrawal of Soviet forces from Afghanistan in 1989. They used brutal public punishments, including floggings, amputations and mass executions, to enforce their rules. Here’s more on their origin story and their record as rulers.

Who are the Taliban leaders? These are the top leaders of the Taliban, men who have spent years on the run, in hiding, in jail and dodging American drones. Little is known about them or how they plan to govern, including whether they will be as tolerant as they claim to be. One spokesman told The Times that the group wanted to forget its past, but that there would be some restrictions.

Did the Afghans think you were a spy?

It was in the Peshawar [Pakistan] paper that I was a spy for the U.S., but what are you going to say? I figured that was better than running guns or drugs — at least there was a mystique.

Were you often in life-threatening situations there?

We were held up a lot with guns going into new areas. But it’s all a matter of how you look at it. Sure, these guys popped up behind rocks, held guns at us, we had to get off our horses. But they always wanted to negotiate. We got them down to $10 and sometimes it ended with tea. I just went through customs in Chicago. They wouldn’t negotiate, they didn’t give me tea and they were going to call the guns if I didn’t pay. So it’s highway robbery, whatever way you look at it.

I was not allowed to leave the U.S.A.I.D. compound in Kabul. They didn’t want to take any risks or have any liability. They dropped me off at the airport and then my friends picked me up and we drove off to the mountains [of Panjshir].

We were up every night until midnight. I saw friends I hadn’t seen in 20 years. We talked about what we thought would happen with the Taliban, which did happen. The Tajiks, the Uzbeks and the Hazaras — all the tribes in the north — were talking about what they were going to do. It all closed down so fast that they never put it together.

I still think in the future, you’re going to see the north separate. The Taliban, who are Pashtun people, have never gotten along with the other tribes. As they say, a modern Afghan only carries a grudge for eight generations. There’s little forgiveness there.

With the Taliban in control, what happens to the country’s gem trade? Are mines still producing?

There’s some mining going on, but not much. A couple of months ago, I was talking to my emerald mining friends — we set up a system where they’d bring the emeralds to Tajikistan, so that’s a possibility. And the ruby mines in the east — those goods are starting to come back out through Peshawar, not in the volumes they were, but still, goods are flowing.

The lapis I don’t know — the Taliban have surrounded that area. I haven’t had any news for two to three months. They were allowing shipments through Kabul, but that obviously is cut off now. The Taliban government is so new, so we won’t know until they get their policy straight. What they are going to charge as far as duties and taxes is unknown at this time.

U.S.A.I.D. has canceled all gemstone contracts because of the Taliban. And many of my friends are now hiding in different homes each night because the Taliban are looking for them. The situation is dire.

But people want to be fed. And gems are one source of income — not just for the miners but for the government itself. Sooner or later, things will settle down.