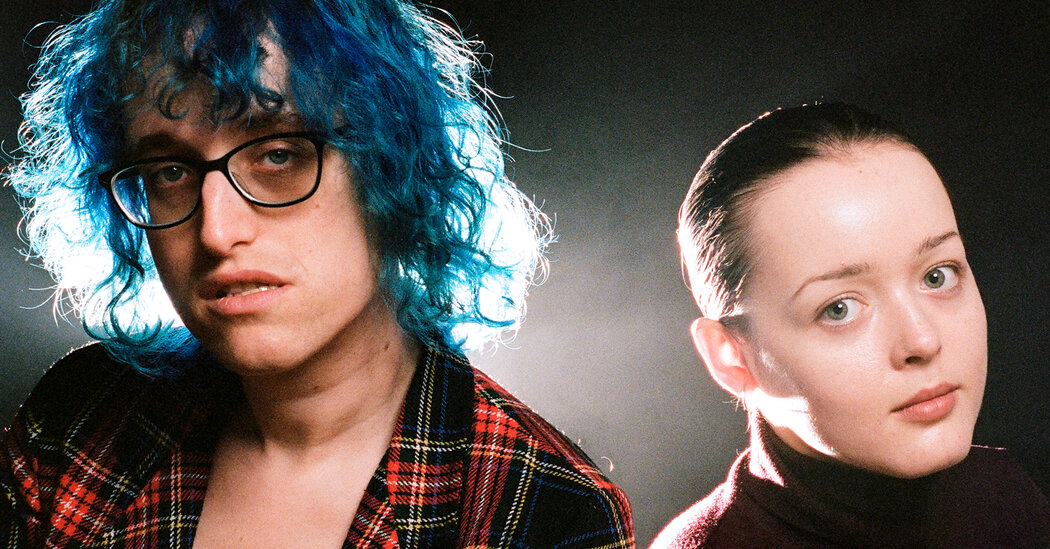 It’s not often that an experimental horror film generates buzz outside of horror geekdom, especially one made by a transgender writer-director-editor, with a newcomer who’s not yet 20 as its star.

But critics have been foregrounding Jane Schoenbrun’s new indie, “We’re All Going to the World’s Fair,” since its debut last year at the Sundance Film Festival. The movie is currently in theaters and set for an April 22 digital release.

Shot mostly in Ellenville, N.Y., in Ulster County, the film stars Anna Cobb as Casey, a teenager who lives with her father in a rural home, where she binges creepypasta videos (or web scares) in her attic bedroom and awkwardly tries to connect with other lovers of the macabre, including an anonymous older man who goes by JLB (Michael J. Rogers). The film’s title comes from its opening scene, when Casey makes a video announcing that she’s taking the World’s Fair Challenge, an online role-playing horror game that, if the videos Casey watches are to be believed, makes people go mad.

A coming-of-age story about the perils and perks of virtual identity-making, “We’re All Going to the World’s Fair” joins other recent low-budget scary movies (“The Strings,” “Rot”) that disrupt tone and form. Cobb, 19, is making her feature film debut with an unsettling performance that’s grounded in a taciturn electricity, like some outsider fusion of Billie Eilish and 1960s-era Sandy Dennis. Schoenbrun, 35, used found footage techniques, webcam confessionals and digital noise to “probe into a queer experience,” they said.

“I didn’t set out to make a movie that was doing what 98 percent of horror movies set out to do, which is to disquiet,” they said.

The film received strong notices out of festivals, and Schoenbrun and Cobb have already signed on to higher-profile projects. Schoenbrun’s next film, the horror-themed “I Saw the TV Glow,” is being made for A24. And Cobb is starring opposite Timothée Chalamet in “Bones and All,” the new drama from Luca Guadagnino.

On Being Transgender in America

Schoenbrun, who is from Westchester County, and Cobb, who grew up in Plano, Texas, recently sat together in New York to talk about making “World’s Fair” and seeking solace in monsters. The interview has been edited and condensed.

What inspired this film?

JANE SCHOENBRUN In 2014, a friend told me about the Slender Man stabbing, the case where these kids who were suffering from mental illness had essentially convinced each other that this online boogeyman was real and that they needed to enact some terrible things in the real world in tribute to him.

How did that resonate with you?

SCHOENBRUN Ten years earlier, I was a kid up later than anyone in the house, reading and writing scary things and looking for a mode of expression as a young, queer, creatively frustrated person who didn’t have many opportunities to express themselves in a way that was going to be looked at in a positive light. As a trans person who was on a very long process of coming to terms with my transness, the idea of the internet as a space to explore that through fiction, before I was ready to explore that in reality, felt very moving.

Anna, what drew you to the role?

ANNA COBB I was lucky enough that Jane thought I was interesting enough to look at. But also I think a lot of times when people portray teenagers, they’re either incredibly flamboyant or comfortable in their skin. As a person coming out of that time, I know that you’re never really comfortable in your skin, and Casey felt very relatable.

Jane, how much of your transgender identity is part of the film?

SCHOENBRUN Oh, it’s all over. The first time Casey and JLB talk, he asks Casey about this transformation she’s claiming to be going through as part of this role-playing game. She says that it’s making her bad, and she has this deep shame about what it’s turning her into. Clearly there’s this desire for change, for transformation, for asserting one’s self-identity as a teenager in a way that would be viewed as horrific, presumably, by the people in her life. That’s a very personal thing to me, and that’s a very trans thing.

That’s quite a path to self-discovery.

SCHOENBRUN I was out to half of the people on set maybe, but I hadn’t started my physical transition. By the time the film premiered, I was six months on hormones and transitioning in public. It’s impossible to detangle the two. It’s a movie about this desire to express something that when I was feeling it as a teenager, I didn’t have a name for it.

What were some of the techniques you used to shoot?

SCHOENBRUN Photo Booth, the application on the Mac that you can film yourself on. I think it’s gorgeous. We shot some on a Canon Vixia, a really consumer-grade camera. We tried to find the kind of camera that Casey would actually have. Anna filmed some of that stuff herself.

COBB I forgot to press the record button a few times.

How much of the film is improvised?

COBB I’d say about a quarter.

Anna, were you creeped out by anything you watched?

Do you think this is a horror film?

SCHOENBRUN No. I consider it a movie about someone who loves horror, and I love horror.

Anna, are you a horror fan?