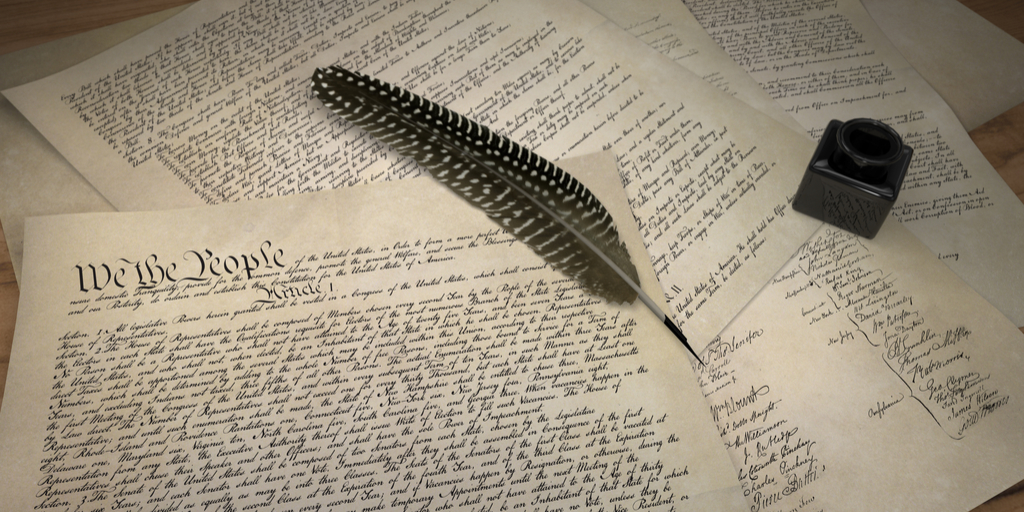 Mel Bradford’s masterful Original Intentions contains an almost throwaway line that caught my attention upon a recent re-reading. The phrase has come to mind again and again ever since. It occurs to me that it contains a once-commonplace conservative truth that has now been obscured by the ongoing debate over the “postliberal” right. Speaking of the Rhode Island ratification convention, Bradford notes that one delegate at least was concerned about the potential insertion into the Constitution of a general guarantee of religious freedom: “‘It will be dangerous’ to call upon the new general government for a guarantee of religious freedom in the states,” Henry Marchant warned. “For the power to guarantee turns quickly into a power to control.”

Marchant was concerned that, should a general guarantee of religious freedom be added to the Constitution, it may be understood to expand Congress’s ability to meddle—ostensibly in defense of a moral right—in an area that the Constitution had left to the states. The principle Bradford identified, though, might be used as a maxim that encapsulates traditional conservative skepticism of both political abstractions and concentrated government power. As we turn to an efficient and omnicompetent government to guarantee the valuable things of life, we often hand over the authority to control—by redefining, coopting, and instrumentalizing—those things.

It is easy to see this principle at work when the guarantees are being enforced by the Left. With the incorporation of the Bill of Rights in the twentieth century, the religion clauses of the First Amendment were indeed transformed into what Marchant feared: a broad, generic guarantee of religious liberty. In theory, this is not a bad thing. That guarantee, however, quickly became a power—through the ability to interpret and define those rights—to control schools, student groups, local governments, and even individuals who might tacitly pressure their peers to engage in religious activity.

And the religion clauses are far from an outlier. Under the regime of judicial supremacy, in which we look to the Court as the ultimate guarantor of all species of rights, the federal government has merely intruded more and more into our personal and communal lives. Even the power to guarantee the most procedural of rights imaginable, the right to due process of law, has morphed into the power to control almost any aspect of American society—it grants nothing less than the power to define human dignity and enforce conformity to its demands.

Similarly, Christopher Caldwell has recently advanced the controversial but I think reasonable thesis that the Civil Rights Act’s guarantees of social equality wound up giving the federal government the power to control every corner of American life, including personal speech and thought, through concepts like hostile work environments, disparate impacts, and affirmative action programs.

At a more conceptual level, one might say that conservatives have slowly and unevenly been learning the lesson that conceiving of government merely as the guarantor of dogmatic, pre-political rights or of abstract equality does not lead in a productive direction. Such mandates can easily—and oftentimes reasonably—be transformed into a positive power to limit liberty and reshape society.

Today’s postliberal or common-good conservatives (there are a number of such strands pushing a form of conservatism “comfortable” using power) identify some of the problems that arose from the vision of government as guarantor, but they ascribe them simply to “liberalism”—usually very vaguely or simplistically defined. The idea of limited government, they often claim, comes from a misguided individualism that ends up putting government to use for the wrong reasons—namely, the promotion of individual choice and autonomy. Get over atomistic liberal theory and you can stop worrying and learn to love government.

So this new conservatism would have government guarantee even more things: family income, social media fairness, economic production, the policies of private businesses, the morals of an increasingly decadent society, even—for a few—piety. The problem, we are told, is just a matter of misguided priorities. Shouldn’t the law and the state support and guarantee the vital social elements of a good human life?

But while it’s often put in terms of support for or reinforcement of beneficial and virtuous social habits, the postliberal vision quickly gives way to control. After all, a peaceful political order in which people and associations have the freedom to build up civil society does not guarantee that virtue will take root. People can have the freedom to pursue human goods, and yet turn their backs on them. Rulers, then, must have the authority not just to provide an environment that allows for human flourishing, but to define the good life, incentivize certain behaviors, and punish those whose choices would undermine it.

Public policies designed to guarantee robust conceptions of the common good, of course, can easily be disfigured, just as the original understanding of certain rights has been. Public education is perhaps the clearest example. What could be more laudable and more in keeping with the vision of a common-good-centered conservatism than a guarantee that all children will receive a quality education? But that guarantee, once made, quickly became the power to control curriculum, moral content, and ultimately the minds of the next generation. As is to be expected, many public schools became indoctrination centers. And where the ideology is challenged, they become partisan battlefields—neither should be acceptable to anyone who genuinely values education.

Michael Oakeshott (Bradford’s muse in Original Intentions) briefly introduced the proposition that “the pursuit of perfection is far too important to be handed over to the control and direction of a set of people who by blood, force or election have acquired the right to call themselves ‘governors.’” With just such a disposition, the power-skeptical conservative tradition recognizes that attempting to orient politics toward the good in a comprehensive sense may very well endanger the good. Given what we know the politics of mass democracy to be—entrenched bureaucrats, special-interest favoritism, ambitious demagogues, media posturing, and an often-ignorant, impressionable, and fickle electorate—is it a trustworthy safeguard for the most valuable things in life?

So for every potential new horizon of power, for every new government guarantee, we might ask: Is this an area of life I am comfortable being controlled, defined, and used by the forces of mass politics?

Whatever my dreams for a nation of uniformly intelligent and patriotic schoolchildren, is the education of my own kids an area I am comfortable being controlled by the political process? No matter how important strong families may be, do I think that a comprehensive federal family policy won’t be used primarily to buy votes and wind up being, at best, a perpetual tug-of-war over what family patterns to subsidize? Whatever my opinion about the Ford Foundation’s pernicious social influence, do I expect that partisan warfare over nonprofit assets would strengthen civil society?

To this, the postliberal typically responds, “there’s no way around it.” The very nature of politics is an unlimited battle between visions of the good—one of which must win out and shape society after its own image. And here we have the real distinction between traditional, power-skeptical conservatism and the new form.

Traditionally, conservatives have held out the possibility of a restrained politics—one that, though not indifferent to human goods, does not pursue a comprehensive vision. It is a politics that seeks only “a tolerably ordered, just, and free society, in which some evils, maladjustments, and suffering will continue to lurk.” Accordingly, it has stressed the importance of constitutional self-government and the particular virtues that sustain it—of institutional and procedural restraints on rulers that take certain precious possessions out of their purview, and that require genuine consensus before putting power into action. (Lest one think such procedural limits cannot be efficacious, consider what legislative monstrosities we have thus far been spared over the past year by the institutional forms of even our battered, twisted, and gutted old constitution. And this is at a time when citizen and politician alike are habituated not to defend and preserve limits, but to attack them.)

Note well that the distinction between skeptical conservatism and this new breed has nothing to do with atomistic, enlightenment liberal theory, as is so often suggested. It is not about the “denial of truth.” It is not about an entirely “neutral” public square. It is not about a lack of political imagination. It is not about an emaciated conception of human life that sees no goods worth fighting for. It is simply about the nature of power and the extent to which human goods can reliably be secured by it. It is about whether one shares what Russell Kirk called the characteristic of the radical: “that he thinks of power as a force for good—so long as the power falls into his hands.” Indeed, some versions of the postliberal position seem to hold that social order is a malleable clay in the hands of a potter: Good order simply will not arise if it is not imposed by state power, a belief that ironically mirrors some extreme enlightenment theories.

The skeptical conservative can pursue substantive common goods, but only through restrictive constitutional forms that ensure some degree of social consensus surrounding them. Likewise, without embracing any absolute moral teaching on individual autonomy, the skeptical conservative can articulate rights as concrete, agreed-upon rules that, borrowing John Courtney Murray’s phrase, serve as “articles of peace” rather than weapons of war. In doing so, we also preserve one of the most delicate of common human goods: society itself.

Like everyone, conservatives are easily lured by promises to make our dreams come true if only we get rid of limits. Against this temptation, we can use a pithy maxim that reminds us that limits on power preserve the freedom to live, act locally, and build up civil society in pursuit of what is truly good and valuable, safeguarding our most precious possessions against the enthusiasts of power and control who, whatever their claims to the contrary, can never guarantee the good society.