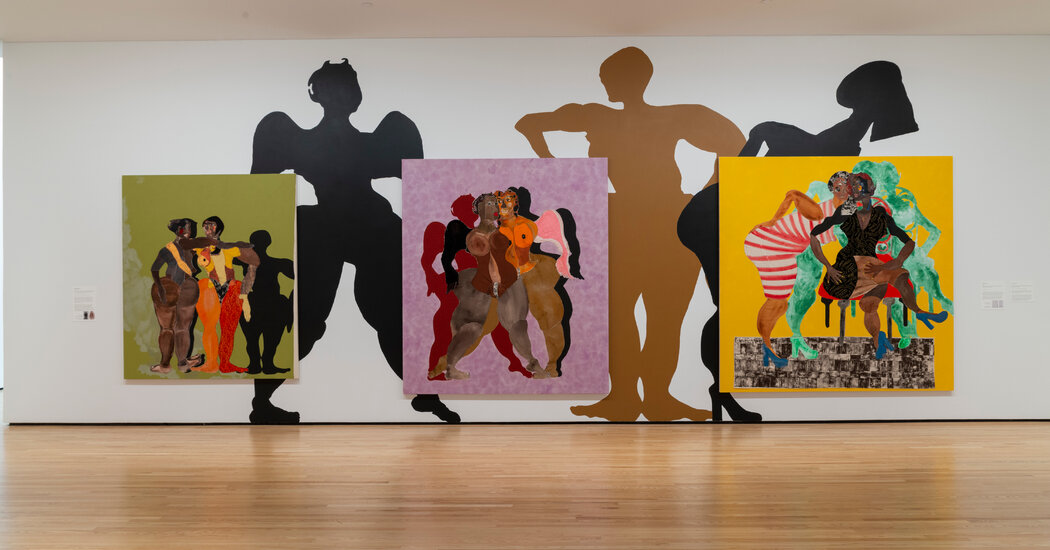 It’s not yet clear if New York is out of the coronavirus woods, but if all goes well, October will bring chances for us to see how recent and new art has fared during the pandemic’s siege. That month the city will witness the unprecedented coincidence of three ambitious and recurring surveys — Greater New York at MoMA/PS1, the New Museum 2021 Triennial and the Performa 2021 Biennial. All were established this century to capture the zeitgeist in one way or another.

This convergence seems auspicious — and needed — offering a chance to take stock after one of the most tumultuous, and for better but also for worse, most transformative periods in American history.

The last year and a half sharpened the view of art as a weapon for social justice, but it also renewed appreciation for art’s contemplative side, its ability to comfort and relieve in times of crisis. These two qualities are often seen as mutually exclusive, but are both present, however subtly, in the best work.

These shows won’t materialize for a while, so there are only news releases, checklists of works and short blurbs about the artists to go by. Parsing them, however, yields interesting if provisional conclusions. While they are fascinatingly different entities, they share one thing: a noticeable dearth of white male artists, a development in step with the growing consciousness of American racism accelerated by the murder of George Floyd. In addition, the two exhibitions, at least, are full of unfamiliar names.

Postponed one year by Covid-19, the latest version of Greater New York will present the work of 47 artists and collectives who live or work in New York (City or State), or have some connection to it through family or ancestry. While it does not totally ignore artists who have had some success in the New York art world, it mostly looks beyond this shiny sphere and, like an octopus, stretches its appendages into different points in time and space.

The show will include examples of the bright yet mysterious stained glass sculptures with which Kristi Cavataro made her New York solo debut this spring at Ramiken Crucible, a gallery in Bushwick.

But also there will be the efforts of Shelley Niro, who was born in 1954 in Niagara Falls, N.Y. and raised on the Six Nations of the Grand River reserve in Canada, returning to the state as an adult to work near Lake Erie. In “Resting Place of My Ancestors,” her photographs of fossils can be read as standing in for human life, ancient wisdom and precedence.

This edition of Greater New York, which opens Oct. 7, was organized by the PS1 curator Ruba Katrib and the Ugandan writer and curator Serubiri Moses, in collaboration with the PS1 director Kate Fowle and Inés Katzenstein, the director of MoMA’s Cisneros Research Institute for the Study of Art from Latin America. It leans toward social justice but of a highly focused kind, and its participants seem to skew older than usual: More than half were born before 1980 and some are no longer living, the oldest being the U.F.O.-inspired abstract painter Paulina Peavy, who was born in 1901 and died in 1999.

If Greater New York spreads through the generations, the New Museum’s latest international triennial, titled “Soft Water Hard Stone,” which opens Oct. 28, concentrates: Nearly all of the artists here were born after 1980, and a few just before. The majority are showing in an American museum for the first time. The title is meant to evoke the prolonged process — a form of resistance — whereby dripping or flowing water alters stone.

Organized by Margot Norton, the New Museum’s curator, and Jamillah James, the senior curator at the Institute of Contemporary Art, Los Angeles, “Soft Water Hard Stone” seems especially concentrated in terms of art forms. The images on the museum checklist suggest that sculpture and sculptural installations, many of them involving found objects, are in the great majority.

Going by this document, the works I look forward to include Jeneen Frei Njootli’s installation of beads within the museum and in the sidewalk outside; and Brandon Ndife’s distinctive brand of organic Goth — often pieces of common furniture, seemingly overgrown with amalgams of related objects or natural materials.

The Performa biennial, running from Oct. 12 to 29, has been drastically reshaped by the pandemic, perhaps for the better. Its founder, RoseLee Goldberg, and her small staff started rethinking their mission and preparing for different eventualities as soon as the shutdown began.

Their solution seems at once inspired and sensible: They have downsized the event and made it more focused on “new visual performance” in New York.

This time there are only eight commissions and nothing else; the international program has been suspended. The invited artists are mostly from New York, greatly shrinking Performa’s carbon footprint. The works — developed in close collaboration with the biennial’s staff — will be performed out of doors with no charge for admission.

It helps that several of the artists are known, but not necessarily for performance.

Tschabalala Self, whose paintings often depict figures in extreme poses or motion, has written a play that will be performed on a stage of her own design at Jackie Robinson Park in Harlem. Ericka Beckman, a veteran filmmaker from the Pictures Generation, will offer an alternative version of “Jack and the Beanstalk” — ambiguously titled “STALK” — reframed as a commentary on capitalism, at an outdoor industrial area in New York.

And Kevin Beasley — whose “A view of a landscape: A cotton gin motor” was seen and heard, running at full tilt in an enclosed vitrine, as the centerpiece of an outstanding 2018 Whitney Museum exhibition — will orchestrate an elaborate performance operating somewhere between a movie set and a happening at an intersection on the Lower East Side.

Aside from its small office, Performa has never had a home, but this year it will be especially nomadic, openly casting different parts of the city in a new light, making them sites for new memories. With this streamlined structure, we should have the pleasant experience of seeing forest and trees at the same time. Sometimes the fight for survival becomes an act of revival.