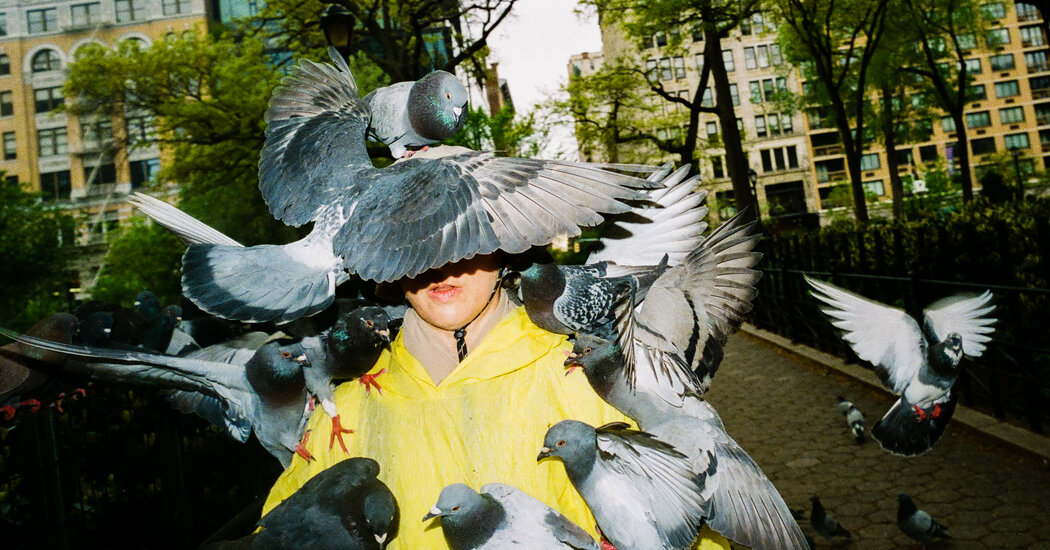 ASHEVILLE, N.C. — Just before sunset on a warm weekday in early May, Avey Tare — a member of the psychedelic pop band Animal Collective — adjusted his glasses and squinted into the waning daylight. He could hear a woodpecker high in the Appalachian foliage along the Blue Ridge Parkway, hammering into a tree for dinner.

As Tare peered into verdant spring treetops, though, a half-dozen songbirds interrupted his search with their evening serenades. “I love it when they’re all singing,” he said, smiling and scanning branches where wrens and juncos darted. “It reminds me of an orchestra tuning, just before they play. There’s space for everyone.”

Tare added that he liked to wake up early in this mountain city and listen each morning. “That’s when you hear the most, before people …” Just then, a motorcycle whizzed down the parkway, and Tare never finished his thought.

Randall Poster had never noticed the songbirds of the Bronx, where he has lived for most of his 60 years, until people started to quiet down earlier each day as the first pandemic winter approached in 2020. He admitted with a wink during a recent video call that his childhood knowledge of birds was limited to, “You know, Baltimore Orioles and the Philadelphia Eagles.”

But when Poster — a powerhouse music supervisor for filmmakers like Martin Scorsese, Todd Haynes and Wes Anderson — began talking about the birds he could hear, an environmentalist pal offered grim news. Human interactions alone possibly kill over 500 million birds each year in the United States. According to a 2018 report, one in eight of the world’s bird species now risk extinction. Common chemicals can ruin the very songs Poster suddenly loved. These statistics sparked an idea: What if he harnessed a quarter-century of industry connections into a fund-raiser for bird conservation, integrating the melodies he heard?

On Friday, Poster will release the first volume of “For the Birds,” a star-studded, 242-track collection of original songs and readings inspired by or incorporating birdsong; later this year, it will be bundled as a 20-LP boxed set to benefit the National Audubon Society. The project sprawled, he said, because birds seemed to be on everyone’s mind. “People were spending a lot of time looking out the window,” said Poster, one among the legion of bird-watching initiates in the pandemic. “There was so much that was unknown and unknowable that we were comforted by the fact nature was still doing its thing.”

“For the Birds” unspools like a version of a soundtrack Poster might design for an Anderson film, cavorting through moods and styles at will. There are elegies and aubades, fiddle tunes and field recordings. A radiant electronic trance from Dan Deacon and a Beatles interpretation from Elvis Costello share space with a Jonathan Franzen reading; Laurie Anderson, Alice Coltrane (remixed), Yoko Ono and a reading from Wendell Pierce open separate LPs.

“It’s a joy to hear other people discovering the wonder of birds,” Elizabeth Gray, the chief executive of Audubon, said from her Maryland home. “Just being able to watch birds fly, build nests and feed their young — it reminds me what makes us human.”

The Fascinating World of Birds

Still, “For the Birds” is the most audacious entry in a new dawn chorus of charitable recordings that either use birdsong as fodder or as the entire track itself. In 2019, “Let Nature Sing” — a poignant mix of 24 chattering species — broke into Britain’s Top 20; in February, an album of 53 calls from threatened Australian birds bested international pop stars to land at No. 2 there.

“Of all the things we need to work harder to protect, birds, like music, speak to everyone,” Anthony Albrecht, the Australian cellist whose Bowerbird Collective led that effort, said by video chat. “They’re such a visible — and audible — indicator of what we stand to lose.”

Birdsong, current fossil records suggest, is at least 66 million years old, or contemporaneous with the last dinosaurs. Humans have most likely incorporated their sounds into music for as long as we’ve made it. Indian instruments evoking warbles, tribal African songs integrating calls, Olivier Messiaen compositions including avian transcriptions: Birdsong has been a cornerstone of musical development across cultures and centuries.

“The range of sounds they use is about the same as the range we use, which is part of why we like them so much. We can hear them,” the musician Jonathan Meiburg said from his home in Germany. For two decades, he has recorded as Shearwater; last year, he released his first book, a kind of personal history of the “world’s smartest bird of prey,” the caracara.

Several musicians on “For the Birds” spoke about their experience with birdsong as epiphanic. Tare wrote Animal Collective’s “Brown Thrasher,” which is part of Poster’s set, following a recent morning of field recording in the Blue Ridge Mountains, but he recalled discovering the mechanical clicks of a crow — imagine the sound of your car with a dead battery, but graceful — while living in Los Angeles as a musical milestone. “I’d never known they could sound like that,” he said, eyes wide.

The composer Nico Muhly remembered the whippoorwill that sang for his family at dinnertime in rural Vermont and how it shaped his early sense of listening. The whistler Molly Lewis still giggled when she recalled exchanging (and changing) melodies with an unseen songbird outside her window years ago. “I knew we were talking, and I just burst out laughing, overjoyed and amazed,” Lewis said by phone.

Still, projects like this court instant cynicism. How much can musicians actually influence individual behaviors, let alone challenge the industrial forces mauling the environment? What is all this effort even worth?

Such questions prompted Albrecht, the Australian cellist, to compile “Songs of Disappearance.” After years of performing pieces inspired by birds, including one work based on the potential Australian origins of songbirds, Albrecht wondered what difference he was making. “There’s a real challenge to connect with audiences that are not already aligned with your values,” he said, frowning. “It’s the idea of preaching to the converted.”

Despite Albrecht’s lack of scientific training, a professor at Charles Darwin University, Stephen Garnett, encouraged him to enlist in the school’s conservation biology doctoral program. When Garnett told Albrecht he was publishing a major report indicating that a sixth of Australian bird species were at risk, Albrecht suggested a compilation that showcased the wealth of sounds that might be lost, a pre-emptive eulogy.

They secured tracks from the country’s pre-eminent wildlife recordist and enlisted an Australian music-industry expert. By Christmas last year, department stores were demanding more copies. In six months, Albrecht’s lark has raised more than $70,000 for bird conservation. The sense that people care, however, motivates him more than the money.

“It spiraled in a way that gave us a lot of hope that there is potential for the public to engage with these critical issues,” said Albrecht, who hopes to release a North American sequel. “You can do something wacky and have people respond.”

Robin Perkins sees the wisdom in such wacky projects, too. For a decade, Perkins has worked for Greenpeace, whose sometimes-confrontational activism has often made the organization a punchline and lightning rod. But through his record label, Shika Shika, Perkins has paired dozens of musicians with the song of a threatened bird from their home country and asked them to turn it into a song. The effort has already raised more than $50,000.

Due in June, the third volume, “A Guide to the Birdsong of Western Africa,” includes pleas for protecting wildlife by Sierra Leone’s Refugee All Stars and soaring techno from the Guinea-Bissaun producer Buruntuma, dotted by the prismatic chirps of a grey Timneh parrot.

“You have to give people something they can understand. 1.5 degrees: What does that mean to me?” Perkins said by phone from Paris, referencing the number frequently cited as a dangerous threshold for global temperature rise. “Chaining yourself to a building has a role, and music has a different role — to help people imagine.”

Long familiar with the vagaries of the entertainment industry, Poster won’t estimate how much money “For the Birds” might raise or if its star power can even propel it up the charts. But he is sanguine about the projects’ extra components — an exhibition of birdhouses set for June in the Brooklyn Botanic Garden, sound baths and concerts, programs in Miami and Marfa and London.

Poster even convinced the eyewear company Warby Parker to design and distribute at least 20,000 branded “Birdoculars” to school groups nationwide, the element that seemed to excite him most. Had someone given him a pair, after all, when he was a child in the Bronx watching five movies every weekend, he might have tuned into his surroundings sooner.

“It’s like when you make a movie, and you hope there’s one kid in the audience who gets enough from it to go and make a movie — or just feel less alone,” Poster said. “We’re going to empower young people by giving them the basic tools to go look at birds, to help develop a younger generation of concerned citizens. Progress is made that way.”