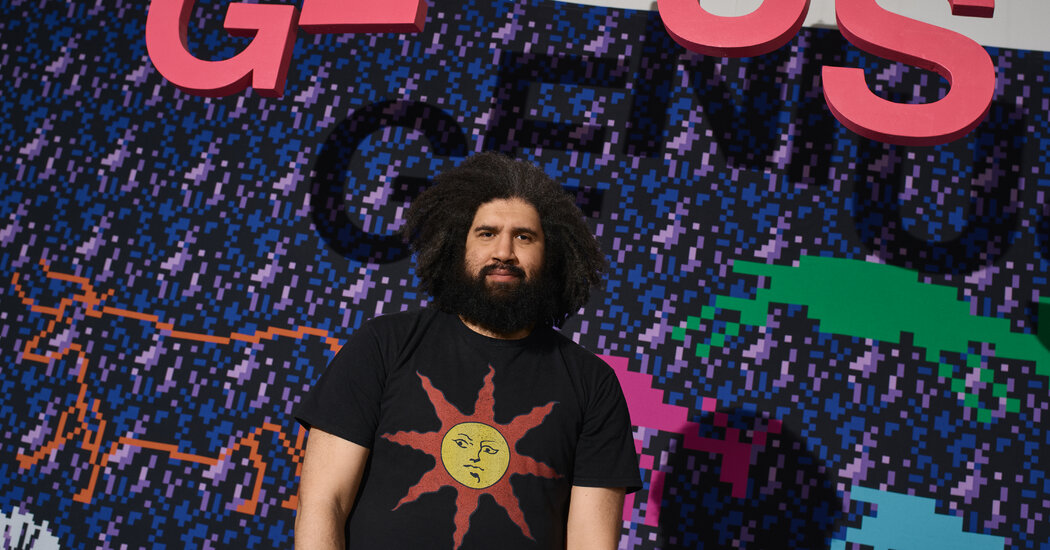 PHILADELPHIA — The film set on view at the Fabric Workshop and Museum looks like a museum gift shop gone wildly awry. A copy of Michelangelo’s “Pietà” has been turned into a chair by removing most of Jesus’s body to make space for a cushion. A nude figure from Picasso’s “Les Demoiselles d’Avignon” (1907) has been rendered in three dimensions as a coat rack. The anamorphic skull image in Hans Holbein’s “The Ambassadors” (1533) forms the surface of a coffee table. And amid it all sits a large animatronic puppet: a scruffy, gray pothead rabbit named Ollie.

You’ve entered the world of “His History of Art,” Jayson Musson’s first solo museum exhibition. It consists of three videos shot at the Fabric Workshop and playing on large, individual screens, along with the set and a behind-the-scenes gallery showcasing how the work was made. The project draws on sitcoms, kids’ educational TV, performance art, and art history lectures to create something both wacky and profound.

Musson stars in the videos as a collector named Jay, who explains the relevance of art and its history to his roommate Ollie, with the help of historical guests like Picasso and the Venus of Willendorf (played by an actress ensconced in an oversize costume made from foam, sand and resin). Jay speaks in a singsong tone, channeling something of Mister Rogers, but his delivery is often patronizing and his lessons harsh: “Ever since man first put on pants and called himself civilized, the first thing he did was make art justifying the killing of his neighbors who didn’t wear pants,” he says in the first episode. Many of the jokes are punctuated by a laugh track.

If you recognize Musson’s name or face — or his brand of painfully honest humor — there’s a good chance you’re thinking of Hennessy Youngman, the character he concocted while in graduate school. Musson, the child of Jamaican immigrants, grew up in Spring Valley, a suburb of New York City, and moved to Philadelphia for college (a B.F.A. at the University of the Arts). He stayed and spent his 20s there, immersed in the city’s D.I.Y. creative scene, which meant holding down service jobs while making work and performing and touring with the rap group Plastic Little. After a decade of that life, he decided to get an M.F.A., seeking more stability.

In 2009, he enrolled at the University of Pennsylvania, but found it bewildering at first. “Coming into an M.F.A. environment from my ‘Where the Wild Things Are’ pirate ship–ass 20s was a culture shock,” Musson said in an interview in a small Philadelphia park near a coffee shop where he once worked.

To cope, he started making short videos in which he, in the guise of a hip-hop savant, mockingly explained key concepts in contemporary art — “performance art is a pre-internet method of annoying groups of people using your body and voice, working in conjunction, in order to create a compelling spectacle that heightens said annoyance” — and offered advice on how to succeed as an artist (tip #1: “be white”).

Hennessy Youngman wore gold chains and hats with the faces of cartoon and comic book characters on them. The content of the videos was often hilarious, but the premise also implicated the predominantly white art world: What did it say about them if the humor hinged on their expectation that this type of Black figure wouldn’t or shouldn’t belong?

“Psychologically, making the work helped me get through graduate school,” said Musson, who in person is amiable and far gentler than his swaggering character.

He began posting the videos, titled “Art Thoughtz,” on YouTube in 2010 — and quickly became famous. Or at least, art-world famous.

“When we started passing it around, it was like wildfire,” said the dealer Jeanne Greenberg Rohatyn, whose gallery, Salon 94, represented Musson in New York City from 2012 until it dissolved last year. She met Musson through another artist, but she’d also been watching, and was deeply impressed by, “Art Thoughtz.”

“He can write, act, make art,” she continued. “He’s a renaissance artist.”

“Art Thoughtz” catapulted Musson into the spotlight, which brought new resources and opportunities. He used them not to do what Hennessy, or even Jay, might have advised: solidify his brand by making more videos. Instead, he created objects, like Coogi sweaters that he cut up and resewed into abstract-painting-like compositions, as well as full-size realizations of the faux Modern artworks drawn by the cartoonist Ernie Bushmiller in his comic strip “Nancy.”

“It’s good to have eyes and a conversation on your work, but you have to know when things should end,” Musson said. “And you should try to end them on your terms, or you’re going to be beholden to something you made 15 years ago.”

In addition to discrete series of objects shown in galleries, his output since “Art Thoughtz” includes pieces released directly on the internet, like three episodes of “The Adventures of Jamel,” a web series about a time-traveling B-boy; and pop music mixes sarcastically dubbed “CVS Bangers.” Such an array could appear scattered, but it’s the mark of someone constantly dreaming up and testing out ideas.

There are through-lines, too, conceptual currents that carry Musson along, like an interest in cartoons and comics, which he loved reading and making as a child. At his request, his father, a graphic designer, would cut out comic strips for him with an Exacto knife. “I would tape them to my wall or make them talk,” Musson said. “I wanted them as isolated shapes, out of their world and onto the wall.”

Another thread is humor, which he calls “the most important thing.

“Jokes can be powerful, but it’s not easy to tell a good joke,” he added. “I think why Hennessy was so successful is that I was more concerned with jokes than information. I was like, this has to be funny, or I might as well go write an essay.”

The artist Becky Suss, who’s also based in Philadelphia and has known Musson for about 20 years, emphasized that humor is central to his being. “There’s something very specific about how smart and funny Jayson is as a person and how he’s been able to make that an integral part of his art,” she said. “Not all of us do that.”

In person, Musson wears his comedy lightly, cracking jokes midstream without worrying about how they’ll land. The humor was harder to hone for “His History of Art,” whose scale was larger than anything he’d undertaken before: Its credits include actors, puppeteers, an assistant director, a production company and the Fabric Workshop staff, some of whom learned puppet-making in order to help realize Musson’s vision.

Alec Unkovic, the museum’s interim director of exhibitions, characterized the project as answering the question: “What could Jayson do with the backing and time to really be able to explore art history and pop culture at this moment, with an institution and a set of collaborators?” Musson spoke of it similarly, calling it “a deer-in-headlights moment” to have so much support.

The depth of collaboration comes through in the galleries, where, after watching the videos, visitors can see how much work went into them, from character sketches and inspiration images displayed around an early, more Oscar the Grouch–like version of Ollie to a bulletin board containing script pages, storyboards and stills. In a way, the back half of the show is a direct rebuttal to the third episode of “His History,” in which Jay tells Ollie that in order to make great art, you must be a genius, and calls up a manic, muscular Picasso to prove it.

But that’s as it should be: Just like “Art Thoughtz,” “His History” isn’t about delivering a definitive critique so much as scrambling our expectations. Is it a TV show or art project? For adults or kids? Earnest or tongue in cheek? All of the above.

“I don’t want to be an art pundit, because the pundit has all the answers, even when they don’t,” Musson said. “I wanted to be the chimp in the zoo, flinging [expletive] around.”

Notably, “His History” also marks Musson’s return to performing onscreen after a decade away. To play the character of Jay, he grew out his hair, which now sports a gray streak — his “Frederick Douglass hair,” he quipped, pulled back into pigtails when we spoke. Although his presence was the linchpin of “Art Thoughtz,” Musson actually doesn’t like acting, and even contemplated turning Jay into a puppet so he wouldn’t have to.

“I’ve had my fill with YouTube,” he said. “I like sitting in a room and sewing. I don’t like the attention.” Still, he managed to enjoy the five days of filming, and offered at least one upside to appearing on camera again: “Now, being older, fatter, happier and dumber, it’s good to document that.”

Jayson Musson: His History of Art